What is Quorum Sensing?

Quorum sensing is a chemical communication mechanism used by many common bacteria to initiate group behaviors. It plays an important role in the establishment of infection by pathogens and in mediating certain symbioses.1

As quorum sensing is dependent on small-molecule signals produced by the bacteria, there is significant interest in developing chemical strategies to interfere with these signals and attenuate quorum sensing-controlled behaviors.

The Blackwell laboratory has developed several chemical tools that strongly modulate quorum sensing pathways in common Gram-negative bacteria by targeting LuxR-type receptors. A suite of the most versatile ligands (804223, 804231, 804258, 804339, 804347) are now available for research purposes; their compound names from Blackwell group publications are provided next to the products below for reference.

Below is a depiction of quorum sensing where bacteria use receptors (green) to sense the signals (red) produced by nearby bacteria, allowing them to communicate the density of their population. As the concentration of signal increases with a growing population (quorum), bacteria adjust their behavior.1 Ligands from the Blackwell lab are valuable tools to modulate these receptors and thus quorum sensing-related processes. These compounds strongly inhibit or activate LasR, RhlR, and QscR from Pseudomonas aeruginosa,2–6 LuxR from Vibrio fischeri,7 TraR from Agrobacterium tumefaciens,2 the putative LuxR receptor (AbaR) from Acinetobacter baumannii,6 ExpR1/ExpR2 from Pectobacterium carotovora,9–10 and several other LuxR-type receptors from related species.12–13 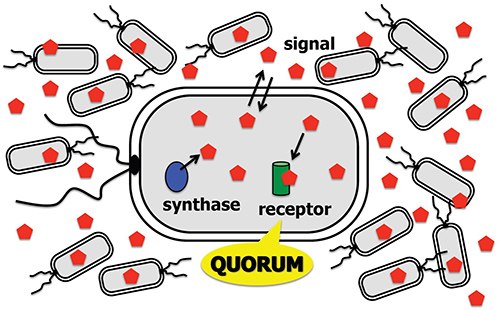 Special thanks to Professor Helen Blackwell for contributing this technology spotlight.