Superoxide Dismutase (SOD) catalyzes the reduction of superoxide anions to hydrogen peroxide. It plays a critical role in the defense of cells against the toxic effects of oxygen radicals. SOD competes with nitric oxide (NO) for superoxide anion, which inactivates NO to form peroxynitrite. Therefore, by scavenging superoxide anions, SOD promotes the activity of NO. SOD has suppressed apoptosis in cultured rat ovarian follicles, neural apoptosis in neural cell lines, and transgenic mice by preventing the conversion of NO to peroxynitrate, an inducer of apoptosis.8,9,10 Covalent conjugation of superoxide dismutase with polyethylene glycol (PEG) has been found to increase the circulatory half-life and provides prolonged protection from partially reduced oxygen species. 7 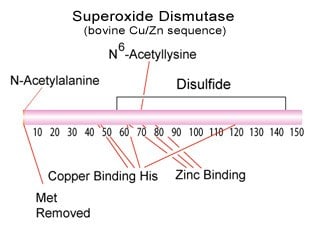 Superoxide Dismutase activity is measured as the inhibition of the rate of reduction of Cytochrome c by the superoxide radical, observed at 550 nm:

The superoxide radical is produced enzymatically by the reaction with xanthine oxidase:
Xanthine + O2 + H2O

Cell damage is induced by reactive oxygen species (ROS). ROS are either free radicals, reactive anions containing oxygen atoms, or molecules containing oxygen atoms that can either produce free radicals or are chemically activated by them. Examples are hydroxyl radical, superoxide, hydrogen peroxide, and peroxynitrite. The main source of ROS in vivo is aerobic respiration, although ROS are also produced by peroxisomal β-oxidation of fatty acids, microsomal cytochrome P450 metabolism of xenobiotic compounds, stimulation of phagocytosis by pathogens or lipopolysaccharides, arginine metabolism, and tissue specific enzymes.1,2

Under normal conditions, ROS are cleared from the cell by the action of superoxide dismutase (SOD), catalase, or glutathione (GSH) peroxidase. The main damage to cells results from the ROS-induced alteration of macromolecules such as polyunsaturated fatty acids in membrane lipids, essential proteins, and DNA. Additionally, oxidative stress and ROS have been implicated in disease states, such as Alzheimer's disease, Parkinson’s disease, cancer, and aging. 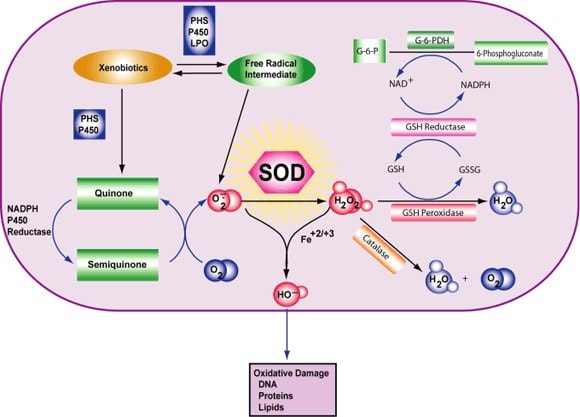