What is Human Immunoglobulin?

Immunoglobulins (Ig), also referred to as antibodies, are glycoproteins produced by white blood cells called plasma or plasma B cells. Immunoglobulins play a critical role in the humoral immune response system by detecting and binding to antigens (i.e. viruses, bacteria, etc.) to ultimately neutralize them.

Immunoglobulins and the Immune System

The immune system consists of organs, tissues, and cells, some of which produce well-diversified molecules that recognize and respond to pathogen invasion within complex multilevel systems. The immune system is classified into two principal compartments: the innate system includes cells and molecules that act rapidly to prevent penetration and spread of infectious agents, and the adaptive immune system consists of lymphocytes and immunoglobulins that develop to provide pathogen-specific protection. Lymphocytes include T cells and B cells that both produce anti-pathogen effector molecules and regulate immune response. T cells develop into effector cells that kill infected cells, or helper cells that orchestrate the activities of other parts of the immune system, including macrophages and B cells. Some B cells eventually develop into plasma cells that secrete antibodies, providing humoral immune protection in the extracellular fluids.

As part of the adaptive immune system, immunoglobulins are produced in response to a pathogen. Their role is to recognize and bind these foreign agents. Immunoglobulins facilitate the neutralization or destruction of these agents through the mediation of effector functions.

Human immunoglobulins are a group of structurally and functionally similar glycoproteins that confer humoral immunity. They are composed of 82-96% protein and 4-18% carbohydrate. The immunoglobulin protein backbone consists of two identical heavy and light chains. Each half of the protein backbone, consisting of one heavy and light chain, are connected by disulfide bonds. For visuals and more information on the structure of immunoglobulins, please visit our Antibody Basics page.

The Five Types of Immunoglobulins

The five types of immunoglobulins are IgG, IgA, IgM, IgD, and IgE. These types vary by structure and immune response function. These five classes of immunoglobulins have been described based on non-cross-reacting antigenic determinants in regions of highly conserved amino acid sequences in the constant regions of their heavy chains. Some classes are even further categorized into subclasses. Table 1 describes the difference in the immunoglobulin classes and subclasses.

The IgG Class of Immunoglobulins

IgG is the major immunoglobulin present in the blood and extracellular spaces. It represents about 70% to 75% of the total immunoglobulin content. IgG exhibits the highest synthetic rate and the longest biological half-life of any immunoglobulin in serum. Its primary function is to eliminate or inactivate invading pathogens and their products. This is accomplished by binding to complement and/or specific receptors on various phagocytes.

The human IgG subclasses are glycoproteins composed of two heavy (2 x 50 kDa) and two light (2 x 25 kDa) chains linked together by interchain disulfide bonds. The light chains are designated as κ and λ and are present in the ratio 2:1 in humans.. The amino-terminal regions of the heavy and light chains exhibit highly variable amino acid composition (referred to as VH and VL, respectively). This variable region is involved in antigen binding. In contrast to the variable region, the constant domains of light and heavy chains are referred to as CL and CH, respectively. The constant regions are involved in complement binding, placental passage, and binding to cell membranes.

Differences in the amino acid content of the heavy chains and the ratio of κ and λ light chains are characteristic of the different subclasses of IgG. Although the primary amino acid sequences of the constant regions of the IgG subclass heavy chains display over 95% homology, major structural differences are found in the hinge region in terms of the number of residues and interchain disulfide bonds. The hinge region links the two Fab arms to the Fc portion of the IgG molecule and provides flexibility.

Although IgG levels are low or undetectable up to day 4, tests can detect antibodies within 7 to 10 days in subjects that display symptoms of SARS-CoV-2 infection and can remain in the blood after the infection is cleared. However, at this time it is not known if these antibodies can provide protection against any future infection by SARS-CoV-2 1.

The IgA Class of Immunoglobulins

IgA comprises about 15% of all immunoglobulins found in healthy individuals. It is secreted mainly by mucosal lymphoid tissues and acts to neutralize invading organisms in mucosal secretions as well as prevent their entry into circulation. It provides localized antibody protection on mucosal surfaces by preventing the attachment and penetration of microorganisms. Although it has a very weak complement-activating activity, it can work with lysozymes to hydrolyze carbohydrates in bacterial cell walls and help the immune system clear the infection.

IgA is characterized by α heavy chains and is found as a monomer or a homodimer. Two subclasses of IgA have been described - IgA1 and IgA2. They differ in their antigenic, biochemical, and biological properties. About 85% of IgA in serum is IgA1 in its monomeric form, whereas about 40% of IgA in external secretions is IgA2. It is produced locally and is found in its polymeric form.

IgA1 shows a good immune response to protein antigens and, to a lesser degree, polysaccharides and lipopolysaccharides. It has broad resistance against several proteases, but some proteases can affect its hinge region. IgA2 protects polysaccharide and lipopolysaccharide (LPS) antigens and displays resistance against bacterial proteases. IgA protease produced by Neisseria gonorrhoeae can splice IgA antibodies into Fc and Fab fragments. The Fab fragment can still recognize the bacteria, but due to the lack of Fc fragment phagocytic cells cannot attach and destroy the invading organism. Individuals with IgA deficiency are prone to frequent infections and may have autoimmune disorders. IgA tests show that the SARS-CoV-2 IgA response appears and grows early, and it peaks around week 3. It is stronger and more persistent than the IgM response 2.

The IgD Class of Immunoglobulins

IgD is an evolutionarily conserved, monomeric, highly glycosylated immunoglobulin with two epitope binding sites. It is expressed in the plasma membranes of immature B-lymphocytes. A secreted form of IgD has also been described that is present in small amounts in serum. Secreted IgD contains two heavy chains of the δ class, and two light chains (Table 1). It may play a role in B cell activation and the development of immunological memory.

Low levels of IgD may be due to the low number of plasma cells in the lymphoid tissues and its short half-life. Secreted IgD appears to enhance mucosal homeostasis and immune surveillance by “arming” myeloid effector cells, such as basophils and mast cells, with IgD antibodies reactive against mucosal antigens, including commensal and pathogenic microbes.

It has been reported that the majority of immature B cells dually express surface IgD and IgM, but a small subset of mucosal B cells from nasopharyngeal lymphoid tissues express only IgD and not IgM 3. These cells are derived from an unconventional form of class switch DNA recombination and thereafter differentiate into plasmablasts or plasma cells exclusively secreting IgD.

The IgE Class of Immunoglobulins

IgE plays a vital role in the crosstalk between innate and adaptive immunity. It is involved in allergic reactions via the sensitization of mast cells. Activation of mast cells occurs after antigen binding of IgE resulting in the release of histamine, lipid mediators, and cytokines. IgE levels are generally very low in human serum but can increase during allergic reactions and some parasitic infections. The pool of IgE in an individual is the sum of IgE produced against different allergens. IgE molecules are shown to coat the parasite, which enables the tissue mast cells and circulating eosinophils to bind via their IgE receptors. Eosinophils are recruited to the site of infection where they release granule proteins, such as eosinophil cationic protein, that can kill the invading parasite 4.

When allergens bind with the Fab portion of the IgE attached to cells, the cells degranulate and release histamine, proteolytic enzymes, leukotrienes, and cytokines that result in vasodilatation and increase small vessel permeability. This causes fluid to escape from capillaries into the tissues, leading to the characteristic symptoms of an allergic reaction.

The IgM Class of Immunoglobulins

IgM is the major immunoglobulin present on the surface of immature B cells. It can recognize epitopes on invading microorganisms and cause agglutination. This antibody-antigen immune complex is then destroyed by complement fixation or receptor-mediated endocytosis by macrophages. IgM is the first immunoglobulin that appears on B cells and the first to be secreted during the primary humoral response. It contributes to about 10% of the total Ig content.

IgM acts as the initial B cell antigen receptor in a monomeric, membrane-bound form and subsequently can be secreted in a pentameric form by activated B cells. In the pentamer all the heavy chains are identical. The μ heavy chains and the secreted form are very effective in the activation of the complement system. In the pentameric structure, each of the five monomers contains two light chains (Table 1). The heavy chain in IgM monomers is composed of one variable and four constant regions, with the additional constant domain replacing the hinge region.

Natural IgM is shown to be reactive with many conserved epitopes. Hence, it plays an important role in clearing intruding pathogens and apoptotic/necrotic cells. The natural IgM binds to target structures with low affinity due to a lack of significant selection by somatic hypermutation. However, the pentameric structure with its 10 antigen-binding sites enables these antibodies to bind multivalent target antigens with high avidity. Opsonization of antigen complexed with IgM is mediated by cell surface Fc receptors 5.

IgM is predominantly found in the lymph fluid and blood and serves as an effective neutralizing agent in the early stages of disease. Elevated levels of IgM indicate recent infection or exposure to antigen. IgM is one of the first antibody isotypes produced by the immune system following exposure to SARS-CoV-2 and other viruses. Hence, a positive IgM test indicates that an individual has been infected and that the immune system has started its response to the virus. Subsequently, as the body’s adaptive immune system comes into play IgM levels decrease and the body increases the production of IgG that specifically targets the virus.

SARS-CoV-2 (the causative agent of COVID-19) is a positive-strand RNA virus that causes severe respiratory distress in humans. This infection is diagnosed from a combination of symptoms and risk factors. Antibody-based serology tests are useful in identifying subjects with an adaptive immune response to the SARS-CoV-2 virus and indicate recent or prior infection. However, the sensitivity of antibody detection can vary depending on the period when the blood sample is collected after infection. The antibody response to SARS-CoV-2 infection starts with IgM and/or IgA antibodies being detected first, followed by the longer-lasting and more-specific IgG response. However, immunocompromised individuals may show diminished IgG response 2.

We provide a vast selection of antibodies for the detection of IgM, IgA, and IgG that can be used to develop ELISA and other sensitive tests in your own laboratory. These antibodies allow for quick and simple, yet reliable assays with easy readouts and can also be adapted for high-throughput screening. For additional resources and reagents for SARS-CoV-2 protein research, please visit our coronavirus (SARS-CoV-2) viral proteins page. 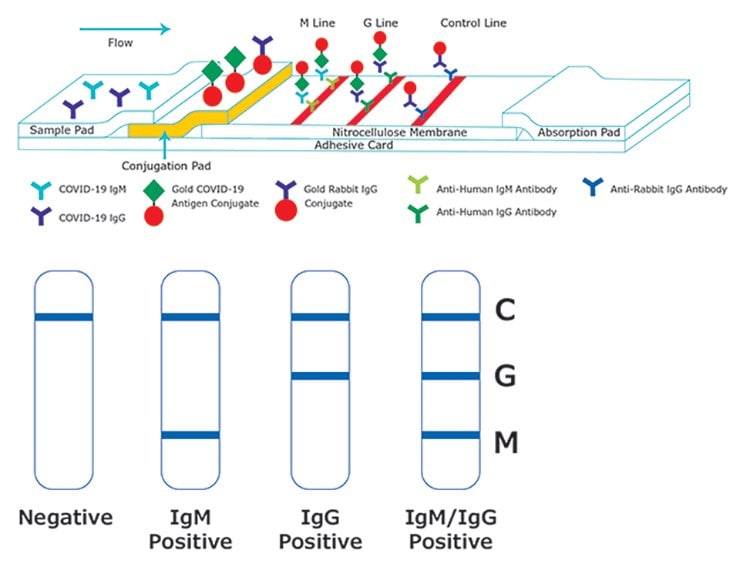