What is the citric acid, tricarboxylic acid (TCA), or Krebs cycle?

The tricarboxylic acid (TCA) cycle, also known as the Krebs or citric acid cycle, is the main source of energy for cells and an important part of aerobic respiration. The cycle harnesses the available chemical energy of acetyl coenzyme A (acetyl CoA) into the reducing power of nicotinamide adenine dinucleotide (NADH).

The TCA cycle is part of the larger glucose metabolism whereby glucose is oxidized to form pyruvate, which is then oxidized and enters the TCA cycle as acetyl-CoA.

Half of the intermediates on which the cycle depends are also the origin of pathways leading to important compounds such as fatty acids, amino acids, or porphyrins. If any of these intermediates are thus diverted, the integrity of the cycle is broken and the cycle no longer functions. Production of essential energy can only be resumed if the diverted intermediate or a subsequent intermediate that leads to oxaloacetate can be replenished by anaplerotic (refilling) reactions.

The TCA cycle is usually described beginning with acetyl-CoA (top position). Follow the diagram clockwise in the direction of the arrows. 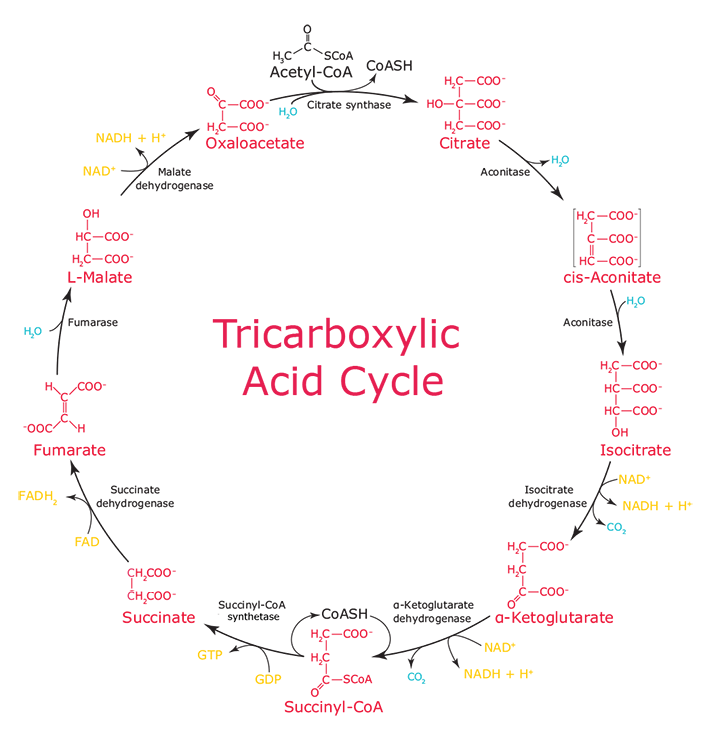 These intermediates are numbered on the diagram below This video shows the stages of the citric acid cycle and keeps track of products and reactants as the intermediate steps progress and complete the reaction (and chemical equation). The video has no sound.

Where does the hydrogen in 4(NADH+H+) and UQH2 come from?

The reducing power at this stage is largely conserved as NADH and ubiquinol (UQH2) in the mitochondrial inner membrane prior to a series of oxidation reactions that end in water. These oxidations power the translocation of protons from the matrix to the intermembrane space. This leads to a potential gradient (proton pump) that drives the retro-location of protons to the matrix and thus activates ATP synthase, which catalyzes ATP formation.

Where does the Krebs cycle take place?

Before the Krebs cycle begins, a glucose molecule must be converted to acetyl-CoA. This process yields 2 acetyl-CoA molecules to be fed into the cycle. Thus, the cycle proceeds twice per original glucose, yielding twice the products shown below.

Pyruvate is a biological molecule and product of glucose metabolism that reacts with adenosine triphosphate and carbon dioxide, converting it into acetyl-CoA and adenosine diphosphate (ADP) at the beginning of the TCA cycle. It is often included in the introductory or preliminary step of the cycle.

Pyruvate plays an important role in multiple biotransformations, as explained in greater depth in the article Pyruvate Transformations.

History of the Krebs cycle

German chemist Hans Adolf Krebs' discovery of this cycle in 1937 marked a milestone in biochemistry. Krebs received the Nobel Prize for Physiology or Medicine in 1953 for this contribution to the study of intermediary metabolism in the oxidative breakdown of carbohydrates. Krebs and his coauthor William Arthur Johnson published their findings "The role of citric acid in intermediate metabolism in animal tissues" in Enzymologia after being rejected by Nature. That original publication was followed by many more.

The TCA cycle in research

The TCA cycle is of special interest to researchers in the field of metabolomics. By studying the rates, by-products, enzymatic activity, and other qualities of processes of metabolism, researchers can draw conclusions about diseases and investigate the efficacy of therapies.

We sell TCA metabolites and enzymes for pinpointing metabolic processes as well as stable isotope-tagged compounds that can aid in measuring rates of whole body metabolism or glucose metabolism. Stable isotope-enriched compounds are metabolically similar to natural homologues, making them safe to use as tracers.

See the materials table below to explore products specific to TCA cycle research, including our Kreb’s Cycle kit that includes all 10 components for monitoring this pathway.