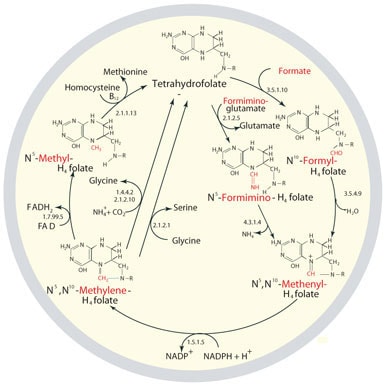 Figure 1. The metabolic cycling and regeneration of tetrahydrofolate. As implied by the image, THF metabolism is not linear but may shift to create one-carbon-donating substrates as needed for particular cellular processes. The one-carbon donor molecules are colored red in the illustrated structures. 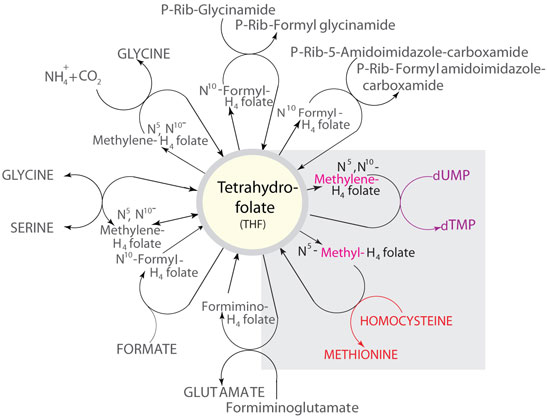 Figure 2. Some of the reactions in which THF metabolites function as carbon donors. The illustration corresponds to the Formic Acid C1 pool indicated on the Nicholson Metabolic Pathways map available through the our website (sigma-aldrich.com/pathways). The reactions of interest discussed in this review are highlighted.

A second important folate metabolic reaction is the conversion of homocysteine to the amino acid methionine by the action of 5-methyl-THF-homocysteine S-methyltransferase (EC 2.1.1.13). Some of this regenerated methionine is subsequently transformed along with ATP by the enzyme methionine adenosyl transferase (EC 2.5.1.6) to produce S-adenosylmethionine (SAM or SAdoMet), phosphate, and diphosphate. S-Adenosylmethionine is a key substrate for methyltransferases and participates in more than 100 types of methylation reactions of biological molecules such as lipids and peptides. The methylation of DNA is an important epigenetic modification that utilizes S-adenosylmethionine as a methyl donor. Therefore, folate levels and metabolism are necessary for normal and malignant cells to synthesize and repair DNA, and to subsequently methylate DNA and other biomolecules.

Interference with folate metabolism has a greater toxic effect on rapidly dividing cells, such as red blood cells, bone marrow cells, gastrointestinal cells, and malignant cells. Because folate metabolism is required for cell replication and survival, compounds that are metabolic inhibitors have successfully been used as antitumor therapeutics, albeit with toxicity and limited application. The first antifolate drug, aminopterin, is a folic acid analog (4-aminofolic acid) that inhibits dihydrofolate reductase, preventing the reduction of folic acid and dihydrofolic acid to THF. Methoxtrexate (MTX) is another analog of folic acid still in use as an antitumor chemotherapeutic that directly inhibits dihydrofolate reductase, as well as inhibiting thymidylate synthase. In light of developed drug resistance to methotrexate, many synthetic compounds that inhibit dihydrofolate reductase and/or thymidylate synthase have been screened. Newer classical antifolates (folate structural analogs) used in cancer chemotherapy include trimetrexate, permetrexed, and raltitrexed, while non-classical antifolates have also been investigated for functionality as antitumor and antibacterial agents. Permetrexed is a multitargeted antifolate that blocks several folic acid cycle enzymes in addition to thymidylate synthase and dihydrofolate reductase.

As folate metabolism is fundamental to both cancerous and normal cells, so folate depletion and its resultant reduction of DNA synthesis and DNA methylation must be toxic to both malignant and normal cells. Studies using healthy cells show that folate deficiency can result in DNA damage, including chromosomal breaks and sequence miscoding, possibly due to insufficient levels of thymidine. Folate depletion may also contribute to reduced levels of S-adenosylmethionine, resulting in hypomethylation of DNA. One in vivo study found that folate deficiency in rats was associated with DNA strand breaks and hypomethylation of specific sequences of the p53 tumor suppressor gene.1 Researchers chose to study p53 for changes potentially associated with dietary folate deficiency as this gene is mutated in 30-50% of common human cancers.

Paradoxically, inhibition of folic acid metabolism has been used as a mechanism for successful elimination of malignant cells, but insufficient folic acid levels in normal cells have been associated with DNA damage and altered DNA methylation conditions that have been associated with malignant transformation. Interference or prevention of folic acid metabolism is then potentially both a cause of malignancy and a means to induce apoptosis or necrosis in malignant cells. The complexity of the folic acid metabolic cycle and its use in construction and modification of fundamental biomolecules of the cell allow this paradox to exist.