The potential for the prevention and treatment of cardiovascular disease through increased dietary intake of omega-3 (w-3) fish oils is not a recent scientific discovery. A historically important study in 1980 reported that high levels of omega-3 fatty acids in the diet of the Inuit people of Greenland were linked to a lower rate of death from acute myocardial infarction compared to the Danish population.1,2 An abundance of ensuing clinical trials supported the benefit of the omega-3 polyunsaturated fatty acids cis- 5,8,11,14,17-eicosapentaenoic acid (EPA) and cis-4,7,10,13,16,19- docosahexaenoic acid (DHA) (Figure 1). EPA and DHA have demonstrated many cardioprotective effects including antiarrhythmic, blood triglyceride-lowering, and antithrombotic effects, as well as improving endothelial relaxation and inhibiting both atherosclerosis and inflammation. 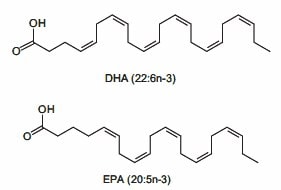 Figure 1.Structures of EPA and DHA.

The primary dietary source of EPA (20:5n-3) and DHA (22:6n-3) is fish products. a-Linolenic acid (18:3n-3) is also an omega-3 fatty acid but is found in plant foods and vegetable oils rather than fish products. Additionally, vegetable oils provide high levels of the omega-6 fatty acid linoleic acid (18:2n-6). a-Linolenic acid is a precursor to EPA and DHA.1 The combined level of EPA and DHA in a typical U.S. diet is only 100-150 mg per day compared to 1-3 g per day for a-linolenic acid and 12-15 g per day for linoleic acid.3,4 Since linoleic is not an EPA or DHA precursor, the World Health Organization and Health Canada have recommended lowering the dietary intake ratio of linoleic acid to a-linolenic acid.5,6 However, a-linolenic acid normally does not accumulate to high concentrations even with increased dietary intake levels due to extensive b-oxidation in vivo. The b-oxidation effect compounded with the limited conversion effectiveness of dietary a-linolenic acid to DHA strongly suggests that the direct intake of EPA and DHA is a potent way to enhance the levels of circulating omega-3 fatty acids in human serum. 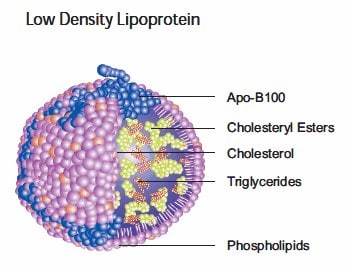 Figure 2.Schematic drawing of the structure of low density lipoprotein.

The correlation between omega-3 fish oils and decreased secretion rates of triglycerides and Apo-B100 in VLDL has been demonstrated in several studies on humans and primates.8,9 Scientific observations have revealed that omega-3 fish oils suppress lipogenesis by down regulating the transcription of fatty acid synthase.10,11 Fish oils increase oxidation by diverting fatty acids into peroxisomal or mitochondrial oxidation12-15 and inducing the transfer of long-chain fatty acids into the mitochondria by carnitine palmitoyl transferase I.16,17 Since fish oils are poor substrates for diacylglycerol transferase (DAG), DAG metabolism is diverted from triglycerides to phospholipids synthesis.18,19 Additionally, they are poor substrates for cholesterol esterification. Furthermore, fish oils reduce VLDL production by increasing proteolytic degradation of Apo-B in the novel, post-ER presecretory pathway.20

Additional effects of omega-3 fish oils during lipid metabolism include the acceleration of chylomicron triglyceride clearance due to increased lipoprotein lipase activity21 and the lipolysis of VLDL triglyceride in the peripheral liver tissue.11,22 However, hypotheses regarding both lipolysis pathways are still being tested.

Current research has begun to reveal the structure and function of small bioactive molecules critical to the cell-cell interactions that provide anti-inflammatory actions and promote inflammation resolution. Novel lipid mediators that display these potent anti-inflammatory and proresolving actions have recently been identified as oxygenated metabolites of EPA and DHA. These local-acting lipid mediators derived from EPA and DHA are referred to as resolvins (i.e., resolution-phase interaction products). The bioactive products of EPA are designated resolvins of the E series (RvE1), while those derived from DHA are designated resolvins of the D series (RvD). A second family of anti-inflammatory lipid mediators is the protectin family, which includes the immunoregulatory and neuroprotective neuroprotectins.23,24 The protectins are derived from docosatrienes, bioactive lipids related to DHA containing conjugated triene structures.25,26

Lipid mediators, including resolvins, play an important role during the intimate cell-cell interactions within vessel walls. Emerging evidence suggests that acute inflammation normally resolves by an active, coordinated program that begins in the first few hours following the initiation of the inflammatory response. Polymorphonuclear leukocytes (PMN) move into the inflamed tissue and promote the switch from the arachidonic acid-derived prostaglandins and leukotrienes to lipoxins, which initiate the termination series of the resolution program. The coinciding biosynthesis of the anti-inflammatory resolvins and protectins leads to the regulation of PMNs by inhibition of infiltration and transmigration. Prostaglandins, leukotrienes, and lipoxins are classified as proinflammatory lipid mediators, while the resolvins and protectins are anti-inflammatory lipid mediators. Accordingly, PMN clearance leads to the release of anti-inflammatory and reparative cytokines.27

Aspirin (acetylsalicylic acid) treatment results in the endogenous formation of the 17R-D series resolvins and docosatrienes, denoted as aspirin-triggered (AT)-RvD and (AT)-DT. During PMNendothelial and/or PMN-epithelial interactions, aspirin initiates the production of 15-epilipoxins (i.e. aspirin-triggered lipoxin [ATL]) via acetylated cyclooxygenase-2 (COX-2).25 Inflammation is not a requirement for the biosynthesis of (AT)-RvD. Lipoxin is a potent regulator of transendothelial-transepithelial migration of PMN.28-30 In vivo studies have confirmed RvE1 and AT-RvDs inhibition of PMN transmigration or PMNs infiltration in murine exudates,31,32 along with RvE1 and RvD2-4 inhibition of PMN infiltration in human blood.33,34 Inhibition of PMN infiltration by RvE1 during the down-regulation of NF-kB activation through a G protein-coupled receptor concludes in a fluctuation of bloodbased cells into the inflammation location.28

It has been proposed that new therapeutic approaches based on the signaling pathways of endogenous resolvins, protectins, and neuroprotectins will be effective in dampening inflammatory responses. Understanding the mechanism of inflammation resolution will aid in the development of novel drugs for the treatment of human disorders linked with inflammation including cardiovascular heart disease.35 As research continues to elucidate this relationship, the question to be answered is: can the inflammatory response become deregulated by novel drugs without injurious consequences to the patient? Upsetting the delicate balance of interactions between proinflammatory lipid mediators and anti-inflammatory mediators could lead to dramatic responses more severe than the natural resolution of inflammation.36