Cerebral function depends on coordinated interactions between two distinct cell types, namely neurons and astrocytes (also called glial cells), and relies on high metabolic activity that is supported by continuous and adequate supply of glucose and oxygen from the blood stream. Regulation of neuronal-glial cooperation involves the mechanism of deactivation of glutamate, the major excitatory neurotransmitter, through glial uptake and conversion to electrophysiologically inactive glutamine, which is then transported back to the neuron to replenish the neurotransmitter pool of glutamate. Similar transfer processes involving the gama-aminobutyric acid (GABA) neurotransmitter take place to activate specific synapses. The maintenance of the glutamate/GABA and glutamine exchange between neurons and glia requires energy provided by glucose oxidation in glycolysis and tricarboxylic acid (TCA) cycle (Figure 1). 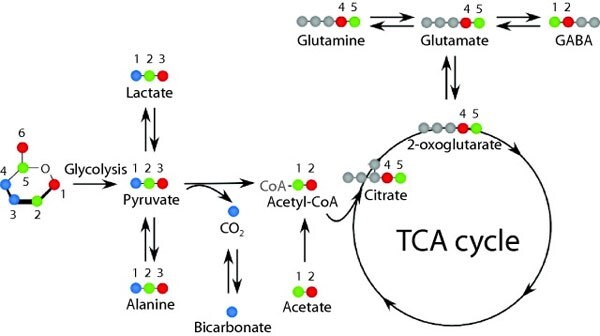 13C magnetic resonance spectroscopy (MRS) is a powerful tool for investigating intermediary metabolism because it gives the ability to simultaneously detect the rate at which 13C nuclei from precursors are incorporated into metabolites and the molecular sites where the 13C are incorporated (isotopomer analysis). 13C MRS has been widely used to study brain metabolism in vivo by following the fate of labels from 13C-enriched fuel molecules through particular metabolic pathways. It allowed demonstrating that brain metabolism is compartmentalized between neurons and astrocytes, each of them having specific metabolic activities, and that glucose is the main metabolic fuel although the energy requirements of cerebral tissue can be satisfied by the oxidation of other substrates such as ketone bodies, lactate and fatty acids.1

Combined with appropriate mathematical models, dynamic in vivo 13C MRS following the infusion of 13C-enriched substrates is thus a powerful tool for studying the cerebral intermediary metabolic fluxes and the label exchange between compartments.2 The high sensitivity and resolution of high magnetic field 13C MRS (the data presented herein were recorded at 9.4 T or 14.1 T) lead to increased reliability in 13C-enrichment time evolution measurements and thus allows determining accurate metabolic fluxes. Upon infusion of [1,6-13C]glucose, it is currently possible to detect the 13C labelling of aliphatic carbons of glutamate, glutamine and aspartate with a temporal resolution of 5 minutes (Figure 2), and of lower concentrated GABA, lactate and alanine at about 20 minutes of resolution.3 Such high temporal resolution obtained in the rodent brain has increased the precision of estimated metabolic fluxes and is currently providing an insight in intermediary metabolism of glial cells and neurons and in glutamatergic and GABAergic neurotransmission processes, as glutamate and GABA are the main excitatory and inhibitory neurotransmitters in the central nervous system. 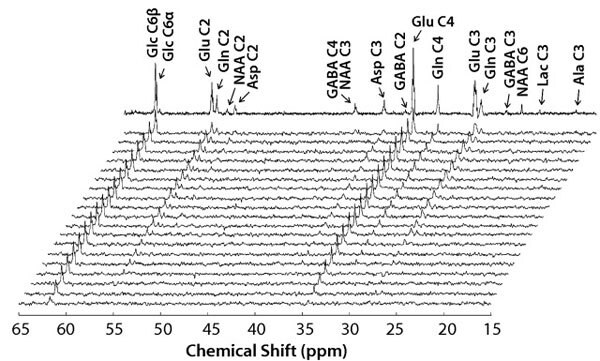 Figure 2.Localized 13C MR spectra in the rat brain acquired in vivo at 14.1 T upon infusion of [1,6-13C]glucose with ~5 minute temporal resolution. The last (top) spectrum is the sum of the MR spectra over the last 40 minutes.

The main limitation of the method described above is that due to low 13C sensitivity only the most concentrated amino acids can be detected in vivo. Thus, important intermediate metabolites are not accessible by conventional thermally polarized 13C MRS. In addition, the temporal resolution is on order of minutes when many biochemical transformations take place in seconds.

To enable the detection of low-concentrated metabolites, a signal enhancement of the label in the biomolecules of interest can be performed using hyperpolarization techniques. The introduction of hyperpolarization techniques, increasing the signal-to-noise ratio (SNR) by 3-4 orders of magnitude, led to the possibility of following uptake and metabolism in real time. Quickly acquiring an image that contains both spatial and spectroscopic information on nuclei other than protons was not possible before these developments. Moreover, fast imaging sequences applied to hyperpolarized nuclei permit the acquisition of real-time metabolic imaging in vivo in real time.4

The most versatile hyperpolarization technique is based on dynamic nuclear polarization (DNP) and was invented and published by researchers working at Amersham Health Research and Development AB in Malmö, Sweden.5 The idea is to prepare frozen glassy solutions containing the labeled substrates at high concentration and a few tens of mM of suitable paramagnetic centers as polarizing agents (so far only persistent radicals have been used for hyperpolarization). The samples are placed in a so-called "polarizer", an instrument operating at moderately large magnetic field (~3-5 T) and low-temperature (~1K). The polarization mechanism, namely DNP, is based on the transfer of polarization from the electron spins of the paramagnetic centers to the nuclei of the dissolved molecules by continuous irradiation with microwaves close to, but not exactly at, the electron spin resonance (ESR) frequency of the paramagnetic centers. The efficiency of DNP relies on the fact that at a temperature of about 1 K, the electron spin polarization is close to 100% even in a moderate magnetic field. Once polarized, the samples are dissolved in superheated water. The dissolution step typically dilutes the frozen glassy solutions by a factor 10-80. The resulting hyperpolarized solution is then transported from the polarizer to the MR scanner and can be injected prior to performing in vivo MRS experiments. Figure 3 illustrates the tremendous SNR obtained following the injection of a 13C hyperpolarized substrate, in this case [1-13C]pyruvate polarized with TEMPO (2,2,6,6-Tetramethyl-1-piperidinyloxy), allowing recording single-shot spectra and thus monitoring real-time metabolism in vivo. Figure 3.In vivo 13C MR spectra measured every 3 s in the mouse head following the injection of hyperpolarized [1-13C]pyruvate. The data was acquired at 9.4 T using a surface coil placed on the mouse head. A 30° pulse was applied every 3 s.

So far, most hyperpolarized 13C brain studies have been performed using pyruvate as substrate. Three metabolic products were observed, namely lactate, alanine and bicarbonate, but glutamate was never detected.6,7 Following the infusion of hyperpolarized [1-13C]acetate, it was recently shown that the TCA cycle intermediate 2-oxoglutarate can also be observed in the rat brain (Figure 4).8 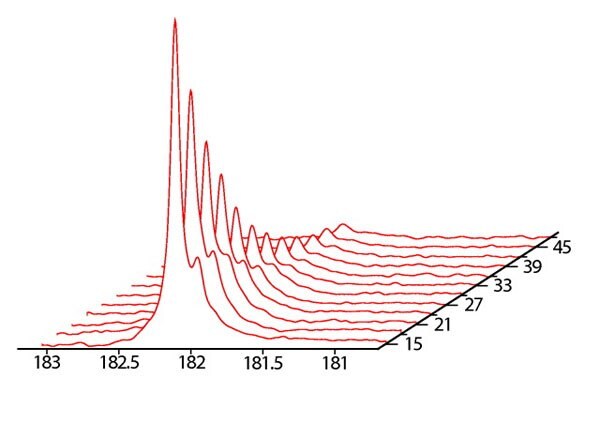 Figure 4.Localized 13C MR spectra in the rat brain acquired in vivo at 9.4 T upon injection of hyperpolarized [1-13C]acetate. A 30° pulse was applied every 3 s following an outer volume suppression scheme to selectively detect brain tissue only.

While thermally polarized 13C MRS provides information on amino acids turnover and sheds light on compartmental interactions, the use of hyperpolarized substrates renders possible the detection of important metabolic intermediates present at very low concentration in the brain. In particular, the ability to directly detect intermediate metabolites such as 2-oxoglutarate will allow more precise quantification of TCA cycle fluxes in brain cells.

It was previously demonstrated that brain metabolism can be studied in humans using thermally polarized 13C MRS.2,9,10 The potential of hyperpolarized 13C MRS for clinical applications, in particular in the field of oncology, has been recently discussed in a white paper written by a scientific panel commissioned by the U.S. National Institutes of Health (NIH).11