Water, a simple nutrient that is so ubiquitous in nature that it is easily forgotten and pushed to the background of our thoughts. Never-theless it is a required nutrient of such importance that humans will succumb to dehydration within 3-10 days without water. Water functions to maintain body temperature, control cell volume, carry nutrients to cells and wastes away from cells, hold products and reactants in solution, as well as participating as either a reactant or product in the reactions themselves. It is such a simple molecule, H2O, that it is one of the first chemical formulas we learn in school, but among its properties are its ability to form relatively weak hydrogen bonds that facilitate its involvement in so many reactions. This ability lay at the heart of an experiment conducted by Nathan Lifson over 60 years ago. He used isotopes of water to determine whether the oxygen in CO2 produced during respiration was derived from the reactant, O2, or the solvent, H2O. By first labeling molecular oxygen and then body water with 18O in a rat, Lifson measured the 18O abundance in expired CO2 and found the oxygens in CO2 exchanged with the oxygen in water. Indeed, these two oxygen containing species were in rapid isotopic equilibrium due to the actions of what we now know is carbonic anhydrase (Lifson, 1966).

Thus after the administration of water labeled with hydrogen and oxygen – i.e., doubly labeled water (DLW) – one could measure the rate of CO2 production by measuring not the CO2 directly, but by instead measuring the two elimination rates and the pool size. CO2 is the end product of energy metabolism and hence one could use standard indirect calorimoretric equations to calculate energy expenditure from the CO2 rate. (The exciting feature was that after giving a loading dose of doubly labeled water using and collecting a sample of body water to measure the pool size by isotope dilution, the ground squirrels in the study could be released and then later recaptured to collect another body water sample used to calculate the hydrogen and oxygen elimination rates.) Energy expenditure could then be measured during the intervening period (metabolic period) when the animal was free-living and thus living their normal activities without interference from the investigator. 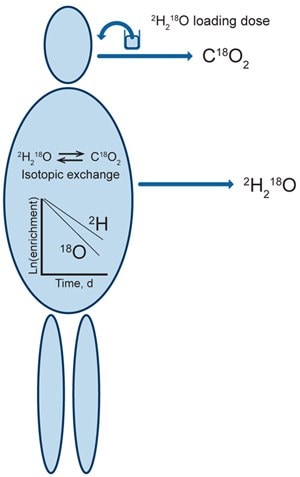 The method was extensively validated in small animals and shown to be accurate, but it was not until 1982 that it was first attempted in humans. The delay could be traced to the then limited availability of the oxygen label, 18O. Scaling up the small animal doses using the low sensitivity mass spectrometric methods used in the 1950s was impractical. Advances in isotope ratio mass spectrometry, however, obviated this limitation and several dozen validation studies were performed in humans. The method was found to be accurate within 1-2% and have a precision of 5-8% (Speakman). The validation studies have shown the method is quite robust by including subjects from birth to the elderly, sedentary subjects at bed rest to subjects during prolonged exercise, and subjects in generally good health to a few subjects with acute or chronic disease (Speakman, 1998). Inspection of the assumptions of the method indicate there are few subject exclusions except those that alter the background stable isotope abundances of hydrogen and oxygen in body water (IAEA).

The precision of the DLW method depends on many factors. One is the variability of TEE itself, which largely depends on variation in physical activity. This is less than one would expect, because the method is used to measure the average TEE over a period of one to two weeks. The day-to-day variation in physical activity thus tends to average to a central (habitual) value. A second physiologic factor that ultimately limits the precision of the DLW method is the respiratory gas exchange ratio (RER). The DLW method measures CO2 production and standard indirect calorimetry equations are used to calculate TEE from CO2 production. Except for the most controlled inpatient conditions, the uncertainty (1 sigma) around the assumed respiratory quotient is about 0.03 units, which corresponds to 3% uncertainty in TEE. The precision of the doubly labeled water method for energy expenditure cannot be less than this limit. The final factor limiting precision is the precision of the isotope abundance measures and the interaction between these and the 2H218O dose and the length of the metabolic period. In our hands, these factors taken together allow us to measure TEE with a precision of about 5% (Trabulsi et al, 2003). This is for a metabolic period of 1-2 weeks and isotope doses of 0.18 g/kg estimated total body water of H218O and 0.12 g/kg estimated total body water of 2H2O. Both doses are stated as if the water were 100 AP, although most investigators use proportionally larger doses of lower enrichment dose water.

The validation of the DLW method has permitted investigators to objectively and accurately measure TEE in free-living subjects. The most recent approaches to establishing energy requirements have incorporated data from DLW studies resulting in a new approach to, and a higher accuracy for, setting energy requirements than in past editions (Butte, 2006). The DLW method has also become a benchmark biomarker for the validation of dietary survey instruments and physical activity surveys and monitors (Huang et al, 2005, Kashiwazaki et al, 2009). Perhaps of greater importance, the DLW method has provided invaluable data to better understand the relative contributions of physical activity and dietary intake to the development of obesity demonstrating the latter is the more likely cause of the current obesity epidemic (Westerterp et al, 2010).

Since the validation of the DLW method in humans, there have been over 800 papers published applying the method to improve our understanding of human energy metabolism. There remain, however, many unanswered questions and the use of the method is increasing. Even greater increases are expected in the next decade because of the recent commercialization of cavity-ring down spectroscopy for the measurement of 2H and 18O abundances in water. This offers the potential of faster analyses using lower cost instruments that are easier to learn to use than isotope ratio mass spectroscopy (Thorsen et al, 2011).

As described by D.A. Schoeller, the DLW method has greatly increased the accuracy and ease of total energy expenditure measurements. ISOTEC® Stable Isotopes is one of the leading manufacturers of doubly labeled water and related products, used to measure energy expenditure. We provide a unique set of services to meet the individual needs of a researcher or a particular study.

ISOTEC® Stable Isotopes has the most experienced team of stable isotope chemists and engineers in the industry, led by an impressive group of Ph.D.’s who are experts in their respective fields. ISOTEC® regularly prepares up to kilogram quantities of custom mixes of doubly labeled water to meet researchers' requirements for isotopic enrichment. Our quality systems adhere to the requirements of ISO 9001 and ensure that you will receive a high quality product. Our Sales team will actively communicate the status of your project and our Analytical team will utilize the most rigorous standards in the industry to ensure the product meets your specifications.

ISOTEC® Stable Isotopes also offers customized services such as customized packaging and labeling to meet your project’s requirements. We will work with you to develop a plan that contributes to the smooth functioning of your research. We are able to provide customized information on the labels along with documentation to facilitate material tracking. We can provide customized packaging and sampling to meet your regulatory requirements. We can also assist you in distributing the material to multiple sites if you are coordinating a large scale project. ISOTEC® will work with you to meet the requirements of your project.