The Role of Intestinal Efflux Transporters In Drug Absorption

Drug Absorption in the Intestine

A key aspect for developing a successful drug involves designing the drug so it can be effectively delivered to the intended site of action. The absorption of a drug is a key component to achieving good bioavailability and ensuring the drug is able to reach the systemic circulation. For oral drugs, the majority of drug absorption occurs in the small intestine where the presence of villi and microvilli greatly increase the surface area for optimal absorption. Drug absorption in the small intestine is greatly influenced by multiple interacting factors, including drug properties (solubility, formulation, concentration, etc.), gastrointestinal properties (pH, food intake, region of the small intestine, etc.), metabolism, permeability, and active transport across the intestinal epithelial membrane.

Efflux Transporters in the Intestine

Membrane drug transporter proteins have been identified as a determinant of drug disposition in the body, potentially affecting absorption, pharmacokinetics, drug-drug interactions, and safety profiles. The major efflux transporters of the ABC family include MDR1 (P-glycoprotein,P-gp, ABCB1), BCRP (ABCG2), and MRP2 (ABCC2). They are localized to barrier tissues of the body such as intestine, liver, kidney, blood-brain barrier, and placenta, where they efflux a wide range of xenobiotics such as statins, macrolide antibiotics, angiotensin blockers, and chemotherapeutic agents, affecting exposure and clearance in vivo.

In the intestine, drug-transporter interactions involving the efflux transporters often result in poor absorption and low oral bioavailability as the drug is readily effluxed back into the intestinal lumen and excreted out of the body. Given that the vast majority of drugs are developed for oral delivery, utilization of in vitro permeability and transporter assays has become a critical tool for assessing a drug’s potential in vivo absorption properties.

While there are many in vitro models to test drugs for both intestinal permeability and efflux liabilities, the Caco-2 assay has been used for over two decades and demonstrates good correlation to human permeability and active efflux for most drugs. Caco-2 cells, derived from a patient with a colon adenocarcinoma, exhibit features in culture demonstrating key human physiology found in the small intestine, including expression of the major efflux transporters on the apical membrane and robust efflux activity when used in the a 21-day bidirectional transwell assay.

Current cell-based transporter assays, like the Caco-2 assay, require the use of transporter-specific compounds as substrates or inhibitors in order to identify potential drug-transporter interactions. However, substrates are often recognized by multiple transporters at different affinities, and the specificity of inhibitors is often unknown or poor, leading to ambiguous interpretations of drug-transporter interactions. MK571 for example, is highly regarded as a selective inhibitor for the efflux transporter MRP2. However, at concentrations that are typically used by researchers, 25 - 50 µM, MK571 effectively inhibits the other major efflux transporters BCRP and MDR1. 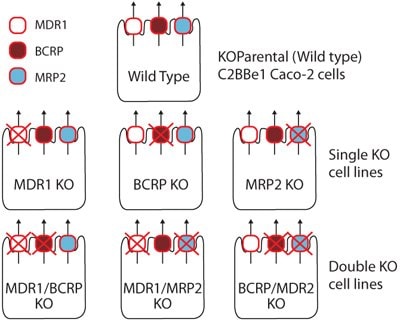 These novel knockout cell lines can be used to identify specific drug-transporter interactions by comparison of drug transport between the wild-type (WT) and the knockout cell lines. Sample data are shown for several model compounds known to be substrates for these efflux transporters - digoxin and erythromycin (MDR1), estrone 3-sulfate and nitrofurantoin (BCRP), and CDCF (MRP2). In each case, the efflux ratio of the compound decreases to unity in the appropriate KO cell line versus the WT cell line (Figures 1, 2, and 3). In addition, cimetidine was identified as a dual substrate for both MDR1 and BCRP transporters using the single and double KO cell lines compared to WT (Figure 4).

These novel intestinal efflux transporter knockout cell lines have been fully characterized and are proving to be powerful tools for elucidating drug-transporter interactions without dependence on chemical inhibitors and for clarifying the potential impact of specific efflux transporters in drug absorption and disposition. These cell lines are currently available for academic and pharmaceutical researchers, and contract research organizations (CROs) in multiple formats including licensing and a recent launched assay-ready plate format. 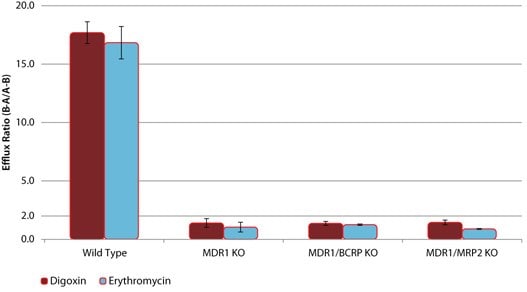 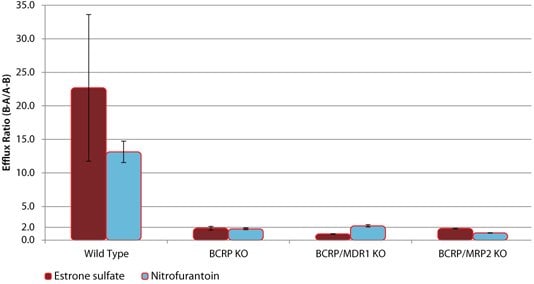 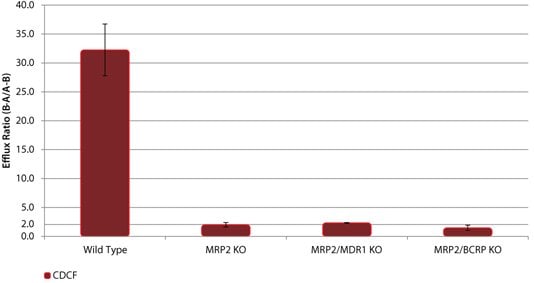