Phase I biotransformation reactions introduce or expose functional groups on the drug with the goal of increasing the polarity of the compound. Although Phase I drug metabolism occurs in most tissues, the primary and first pass site of metabolism occurs during hepatic circulation. Additional metabolism occurs in gastrointestinal epithelial, renal, skin, and lung tissues. Within cells, most phase I enzymes are located in the endoplasmic reticulum and thus are enriched in microsomal preparations.

Phase I reactions are broadly grouped into three categories: oxidation, reduction, and hydrolysis. As most small molecule drugs are lipophilic in nature, drug metabolism converts these hydrophobic compounds into more water soluble compounds that can be excreted. Typically, oxidation is the most common phase I reaction. The hepatic cytochrome P450 system is the most important of the phase I oxidation systems (Figure 1). 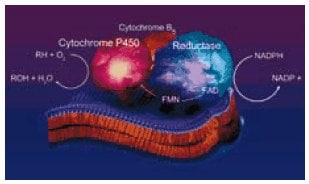 Figure 1.Our hepatic microsomal cytochrome P450 enzymes are membrane-bound oxygenases containing a thiolate heme near the active site. Electron donation for the oxidatve mechanism is supplied from a coupled NAD(P)H reductase and cytochrome b5 system. Until recently, the difficulty of isolating and reconstituting native enzymes from human tissue has hampered their use for studies with well-defined in vitro drug metabolism systems. For this reason, multienzyme microsomal preparations are often utilized for the elucidation of the oxidate fate of drugs and other xenobiotics. Our recombinant microsomal preparations have the advantage of a single cytochrome P450 isozyme activity.

The cytochrome P450s are members of a superfamily of monoxygenases that catalyze the oxidative metabolism of xenobiotics, the initial step in the biotransformation and elimination of a wide variety of drugs and environmental pollutants. P450s are located primarily in the endoplasmic reticulum of liver tissue.

Use of a eukaryotic, yeast host allows efficient expression of the active isozyme with more accurate post-translational modification. Cerosomes are prepared from Saccharomyces cervisiae expressing the human cytochrome P450 isozyme and human NADPH reductase and cytochrome b5 in some preparations.

The eukaryotic system provides an isozyme system with the following advantages: 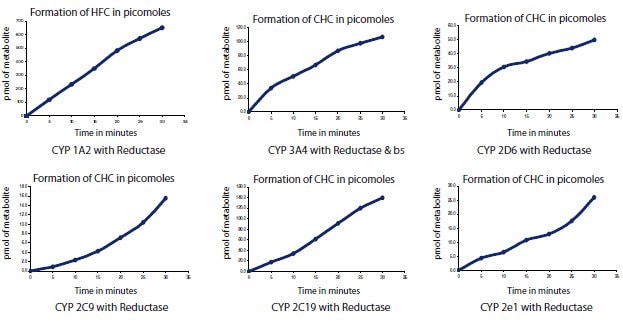 Cytochrome P450 reductase catalyzes the reduction of hemethiolate-dependent monooxygenases such as EC 1.14.14.1 (unspecified xenobiotic monooxygenases2) and is part of the microsomal hydroxylating system. This reductase is a flavoprotein containing FMN and FAD. It also reduces cytochrome b5 and cytochrome c.

Cytochrome b5 is a 15 kDa membranebound flavoprotein capable on enhancing the redox potential of the P450 oxidative system.