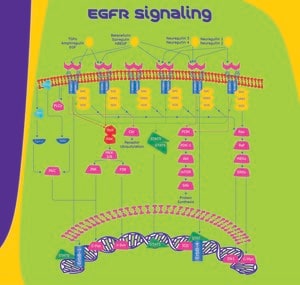 This product is used as a mitogen, triggering the cell to commence mitosis, in a variety of cell lines. In tissue cultures, EGF acts to reduce or eliminate the requirement for serum and can be used in conjunction with other media additives and hormones.

Human EGF (hEGF) is an identical molecule to β-urogastrone, a molecule isolated on the basis of its ability to inhibit gastric acid secretion. EGF is structurally homologous to human transforming growth factor-α, and both exert their actions through EGF receptors. E9644 is the N-terminal methionyl form of natural mature EGF.

This product should be stored at -20°C and will retain activity for two years. After reconstitution, it can be stored at 2-8°C for one month, or frozen in aliquots at -70°C or -20°C for longer periods.

This product was lyophilized from a 0.2 μm-filtered solution of phosphate buffered saline, at pH 7.4. It should be reconstituted by adding the contents of the vial to 1 mg/mL using 10 mM acetic acid. To dilute to lower concentrations, but no fewer than 10 μg/mL, an addition of 0.1% BSA or HSA will be needed. For use in proliferation assays, further dilute the sample with medium without albumin.

The biological activity of this product is measured in a proliferation assay using BALB/MK cells. The EC50 is defined as the effective concentration of growth factor that elicits a 50% increase in cell growth in a cell based bioassay.

Which document(s) contains shelf-life or expiration date information for a given product?
If available for a given product, the recommended re-test date or the expiration date can be found on the Certificate of Analysis.
What is the difference between Product No. E9644 and E4269, Epidermal Growth Factor?
Product No. E9644 is the mature EGF protein. Long EGF (Product No. E4269) is an analog of epidermal growth factor comprising the human EGF amino acid sequence plus a 53 amino acid N-terminal extension peptide. Long EGF has been developed as an inexpensive, high quality potent analog of EGF for use as a growth factor supplement for serum-free or low-serum cell culture.
What is the molecular weight of Epidermal Growth Factor (EGF) human, Product E9644?
The mature protein has a molecular weight of 6 kD.
How long can I store a solution of Epidermal Growth Factor (EGF) human, Product E9644?
Solution stability can be found on the product data sheet. If Product No. E9644 has been reconstituted with 0.2 micron-filtered 10 mM acetic acid containing 0.1% HSA or BSA to a concentration of not less than 10 ug/ml, it can be stored at 2-8 °C for a maximum of one month. For extended storage, freeze in working aliquots at -70 °C or -20 °C. Repeated freezing and thawing is not recommended.
Can I use PBS to reconstitute Epidermal Growth Factor (EGF) human, Product E9644?
We recommend reconstitution with acetic acid to make sure the entire product will be solubilized.PBS can be used, but the total amount of the protein in the vial may not go into solution.It is best to make a higher concentration in acetic acid, and then dilute into PBS.
Can Epidermal Growth Factor (EGF) human, Product E9644, be used on rat cells?
This product has been tested for activity using the mouse Balb/3T3 cell line.We have not tested its activity in rat cell culture, but we expect that will also work in that application.
How do I get lot-specific information or a Certificate of Analysis?
The lot specific COA document can be found by entering the lot number above under the "Documents" section.
How do I find price and availability?
There are several ways to find pricing and availability for our products.Once you log onto our website, you will find the price and availability displayed on the product detail page.You can contact any of our Customer Sales and Service offices to receive a quote. USA customers: 1-800-325-3010 orview local office numbers.
What is the Department of Transportation shipping information for this product?
Transportation information can be found in Section 14 of the product's (M)SDS.To access the shipping information for this material, use the link on the product detail page for the product.
My question is not addressed here, how can I contact Technical Service for assistance?
Ask a Scientist here.
Show more questions

Cell culture has become one of the most fundamental techniques for modeling biological systems, and is of increasing importance in the biotechnology and pharmaceutical sectors as well as an essential...
Keywords: Antibiotics, Apoptosis, Cell attachment, Cell culture, Cryopreservation, Filtration, Growth factors, Pharmaceutical, Phase transitions