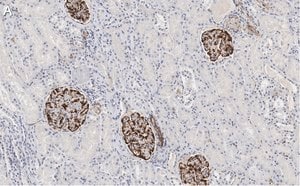 Clone 10C2 is a ZooMAb mouse recombinant monoclonal antibody that specifically detects human Nestin. It targets an epitope within the C-terminal region.

Anti-Nestin, clone 10C2 ZooMAb, Cat. No. ZMS1022, is a recombinant Mouse monoclonal antibody that specifically targets Nestin and is tested for use in Immunocytochemistry, Immunohistochemistry (Paraffin), and Western Blotting.

Immunocytochemistry Analysis: A 1:1,000 dilution from a representative lot detected Nestin in SH-SY5Y cells.

Nestin (UniProt: P48681) is encoded by the NES (also known as Nbla00170) gene (Gene ID: 10763) in human. Nestin is a class VI intermediate filament protein that is required for survival, renewal, and mitogen-stimulated proliferation of neural progenitor cells. Nestin expression is upregulated in most mitotic cells and is downregulated upon differentiation. Upon terminal neural differentiation Nestin levels are shown to be down regulated and replaced by neurofilaments. Nestin is also shown to be expressed in kidney in a developmentally regulated pattern. Its expression is also associated with tubulointerstitial injury and can serve as a marker for peritubular endothelial cell injury and tubulointerstitial fibrosis. Nestin is reported to be constitutively phosphorylated and its phosphorylation state increases during mitosis when the cytoplasmic intermediate filament network is reorganized. Nestin has a short N-terminus and an unusually long C-terminus region that results in complex binding to an array of structural proteins. The short N-terminus leads to preferential intermediate filaments formation with heterodimers and heterotetramers and the long C-terminal portion functions as links or bridges between intermediate filaments and microtubules. Nestin can exist in homodimeric or homotetrameric form, however in mixtures with other intermediate filament proteins such as vimentin and alpha-internexin, it can form heterodimers, which can assemble to form intermediate filaments. Nestin is shown to promote the disassembly of phosphorylated vimentin intermediate filaments during mitosis and play a role in the trafficking and distribution of intermediate filament proteins to daughter cells during progenitor cell division. This ZooMAb recombinant monoclonal antibody, generated by our propriety technology, offers significantly enhanced specificity, affinity, reproducibility, and stability over conventional monoclonals. (Ref.: Xie, L., et al. (2015). Stem Cells Int. 2015:762098; Tomioka, M., et al. (2010). 15(5); 568-574).

Purified recombinant mouse monoclonal antibody IgG, lyophilized in PBS with 5% Trehalose, normal appearance a coarse or translucent resin. Contains no biocide or preservatives, such as azide, or any animal by-products. Larger pack sizes provided as multiples of 25 μL.

0.3 mg/mL after reconstitution at 25 μL per vial. Please refer to guidance on suggested starting dilutions and/or titers per application and sample type.