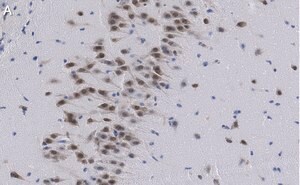 Clone A60 is a ZooMAb mouse recombinant monoclonal antibody that specifically detects NeuN in multiple species.

Anti-NeuN, clone A60 ZooMAb, Cat. No. ZMS377, is a recombinant Mouse monoclonal antibody that detects NeuN and is tested for use in Immunocytochemistry, Immunohistochemistry (Paraffin), and Western Blotting.

RNA binding protein fox-1 homolog 3 (UniProt: Q8BIF2; also known as Fox-1 homolog C, Hexaribonucleotide-binding protein 3, Fox-3, Neuronal nuclei antigen, NeuN antigen) is encoded by the Rbfox3 (also known as D11Bwg0517e, Hrnbp3) gene (Gene ID: 52897) in murine species. The NeuN protein is localized in nuclei and perinuclear cytoplasm of most of the neurons in the central nervous system of mammals. It is widely expressed in brain, including in cerebral cortex, hippocampus, thalamus, caudate/putamen, cerebellum, as well as in the spinal cord. However, it is not detected in Cajal-Retzius cells in the neocortex, Purkinje cells, and photoreceptor cells. NeuN expression has been reported as early as embryonic day 9.5 (E9.5) and by E12.5 it can be found in the developing ventral horns and is also detected in the developing dorsal horns as well as in the dorsal root ganglion. It is expressed from embryonic stage to adulthood. Its expression is enhanced by retinoic acid treatment. It can serve as a pre-mRNA alternative splicing regulator and regulates alternative splicing of RBFOX2 to enhance the production of mRNA species that are targeted for nonsense-mediated decay. Initial characterization of NeuN was derived from usage of a monoclonal antibody (A60), but later identified as RBFOX3. Subsequent studies have shown that anti-NeuN antibodies can identify most types of neurons in the whole nervous system with some rare exceptions. NeuN knockout mice display significantly reduced brain weight, impaired neurofilament expression and decreased white matter volume. They show increased susceptibility to seizures and reduced anxiety-related behaviors compared with wild type littermates. Antibodies for NeuN predominantly associate with cell nuclei and, to a lesser extent, with the perinuclear cytoplasm. Two isoforms of the NeuN protein (46 and 48 kDa) are present in both locations but differ in their relative concentration in the nucleus and cytoplasm. This ZooMAb recombinant monoclonal antibody, generated by our propriety technology, offers significantly enhanced specificity, affinity, reproducibility, and stability over conventional monoclonals. (Ref.: Lin, YS et al. (2018). PLOS One. 13(2); e0192355; Mao, S., et al. (2016). Front. Neuroanat. 13;10:54).

0.03 mg/mL after reconstitution at 25 μL per vial. Please refer to guidance on suggested starting dilutions and/or titers per application and sample type.