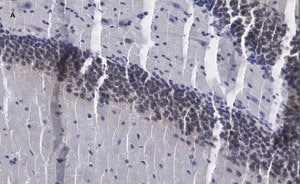 Clone 1D10 a ZooMAb is a rabbit recombinant monoclonal antibody that specifically detects c-Fos. It targets an epitope with in 14 amino acids from the N-terminal region.

Anti-c-Fos, clone 1D10 ZooMAb, Cat. No. ZRB457, is a recombinant Rabbit Monoclonal Antibody that specifically targets Proto-oncogene c-Fos and has been tested for use in Immunocytochemistry, Immunohistochemistry (Paraffin), and Western Blotting.

Proto-oncogene c-Fos (UniProt: P01100; also known as Cellular oncogene fos, G0/G1 switch regulatory protein 7) is encoded by the FOS (also known as G0S7) gene (Gene ID: 2353) in human. C-Fos is a nuclear phosphoprotein that forms a tight, but non-covalently linked, complex with the JUN/AP-1 transcription factor. In the heterodimer, c-Fos and JUN/AP-1 basic regions each seems to interact with symmetrical DNA half sites. In quiescent cells, the small amount of c-Fos present is phosphorylated at tyrosine 10 and 30. This tyrosine phosphorylated form is cytosolic. Following induction of cell growth, it first localizes to the endoplasmic reticulum and only later to the nucleus. Localization at the endoplasmic reticulum is shown to require dephosphorylation at tyrosine 10 and 30. In growing cells, c-Fos is dephosphorylated by PTPN2, which leads to its association with endoplasmic reticulum membranes and activation of phospholipid synthesis. A basic motif (aa 139-159) is required for the activation of phospholipid synthesis. Upon stimulation by nerve growth factor it is undergoes phosphorylation in the C-terminal region by MAPK and RSK1. Phosphorylation on both serine 362 and serine 374 leads to its stabilization. Phosphorylation on serine 362 and serine 374 primes further phosphorylation on threonine 325 and 331 through promoting docking of MAPK to the DEF domain. c-Fos is also reported to be constitutively sumoylated with SUMO1, SUMO2 and SUMO3 and sumoylation requires heterodimerization with JUN and is enhanced by mitogenic stimulation. Sumoylation inhibits the AP-1 transcriptional activity and is, itself, inhibited by Ras-activated phosphorylation on threonine 232. Three different isoforms of c-Fos have been described that are produced by alternative splicing. This ZooMAb recombinant monoclonal antibody, generated by our propriety technology, offers significantly enhanced specificity, affinity, reproducibility, and stability over conventional monoclonals.

300 μg/mL after reconstitution at 25 μL. Please refer to guidance on suggested starting dilutions and/or titers per application and sample type.