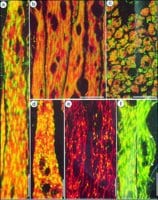 In staining of chicken gizzard ultrathin tissue cryosections, the antibody labels the dense bodies and longitudinal channels linking consecutive dense bodies that are also occupied by desmin and the membrane-associated dense plaque. It does not stain adult cardiac and skeletal muscles except for traces due to contaminations of the sample with non-muscle cells, or if embryonic tissue is being used.

Monoclonal Anti-β-Actin (mouse IgG1 isotype) is derived from the AC-15 hybridoma produced by the fusion of mouse myeloma cells and splenocytes from an immunized mouse. Actin is one of the most conserved eukaryotic proteins, it is expressed in mammals and birds as at least six isoforms. Four of them represent the differentiation markers of muscle tissues and two are found practically in all cells. There are three α-actins (α-skeletal, α-cardiac, and α-smooth muscle), one β-actin (β-nonmuscle), and two γ-actins (γ-smooth muscle and γ-non-muscle). Actin isoforms show >90% overall sequence homology, but only 50−60% homology in their 18 NH2-terminal residues. The NH2-terminal region of actin appears to be a major antigenic region and may be involved in the interaction of actin with other proteins such as myosin.

Monoclonal Anti-β-Actin antibody produced in mouse has also been used for immunofluorescence staining, immunoblotting and immunohistochemistry.

Mouse Monoclonal Anti-β-Actin antibody has been used as a control for protein arrays and immunoblot assays.

Supplied as ascites fluid with 15mM sodium azide as a preservative.

Actin and myosin are constituents of many cell types and are involved in a myriad of cellular processes including locomotion, cytokinesis, cytoplasmic streaming, secretion and phagocytosis. The actin in cells of various species and tissue origin is very similar in its immunological and physical properties.

RIDADR
NONH for all modes of transport
WGK Germany
3

Which document(s) contains shelf-life or expiration date information for a given product?
If available for a given product, the recommended re-test date or the expiration date can be found on the Certificate of Analysis.
What is the molecular weight of Product A5441, Monoclonal Anti-β-Actin antibody produced in mouse?
Beta Actin has a molecular weight of 42 kDa.
Can I use Product A5441, Monoclonal Anti-β-Actin antibody produced in mouse, to detect mouse beta actin?
This antibody will detect mouse beta actin. When used for western blotting, the secondary antibody may react with mouse IgG from the sample resulting with a bands at 50 kDa and 25 kDa (reducing conditions) or approximately 150 kDa (non-reducing conditions). It is best to use a directly conjugated antibody for immunohistochemistry or immunofluorescent assays. We offer Product numbers A3854, peroxidase conjugated.
What IgG light chain (kappa or lambda) is associated with Clone AC-15 for Product A5441, Monoclonal Anti-β-Actin antibody produced in mouse?
We have not determined the light chain used by monoclonal antibody AC-15. 95% of mouse antibodies have kappa light chains.
Why do I have 3 bands on my western blot when using Product A5441, Monoclonal Anti-β-Actin antibody produced in mouse?
While actin should run as a 42 kDa band when detected by Western blotting, there are recent observations that cleavage products can be seen in cells undergoing apoptosis. Initial cleavage gives a band at 41 kDa, which may appear as a doublet on the blot. In addition, further cleavage results in a major band at 30 kDa and a small band at 14 kDa which have been shown to be cleavage products due to the action of interleukin 1 -converting enzyme. This may explain the detection of smaller bands when blotting with this antibody. This banding pattern may be detected with other actin antibodies as well. Kayalar, C., et al., Proc. Natl. Acad. Sci., USA, 93:2234-2238, (1996).
What is the antibody concentration of Product A5441, Monoclonal Anti-β-Actin antibody produced in mouse?
This antibody is ascities fluid. The amount of protein present and the amount of IgG1 present is indicated on the Lot-specific Certificate of Analysis.
What peroxidase-conjugated secondary antibody should I use with Product A5441, Monoclonal Anti-β-Actin antibody produced in mouse?
We recommend using Product No. A9044, rabbit anti-mouse IgG, peroxidase conjugate as a secondary antibody. We also offer this same antibody directly conjugated to peroxidase as Product No. A3854.
How do I get lot-specific information or a Certificate of Analysis?
The lot specific COA document can be found by entering the lot number above under the "Documents" section.
How do I find price and availability?
There are several ways to find pricing and availability for our products. Once you log onto our website, you will find the price and availability displayed on the product detail page. You can contact any of our Customer Sales and Service offices to receive a quote. USA customers: 1-800-325-3010 or view local office numbers.
What is the Department of Transportation shipping information for this product?
Transportation information can be found in Section 14 of the product's (M)SDS.To access the shipping information for this material, use the link on the product detail page for the product.
My question is not addressed here, how can I contact Technical Service for assistance?
Ask a Scientist here.
Show more questions
Protocols & Articles

Antibodies to Actin and GAPDH

Actin and myosin are the two major cytoskeletal proteins implicated in cell motility. As constituents of many cell types, actin and myosin are involved in a myriad of cellular process including locom...
Leigh Gaskill
BioFiles 2008, 3.6, 10.
Keywords: Biofiles, Immunofluorescence, PAGE, Western blot