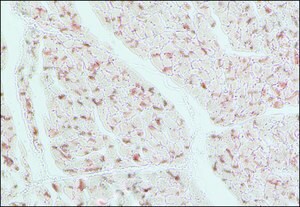 Anti-Connexin 43 is developed in rabbit using a synthetic peptide conjugated to KLH with glutaraldehyde as immunogen. The peptide corresponds to a C-terminal segment of the cytoplasmic domain of human and rat connexin 43, amino acid residues, with an N-terminal added lysine. Affinity isolated antigen specific antibody is obtained by immunospecific purification which removes essentially all rabbit serum proteins, including immunoglobulins, which do not specifically bind to connexin 43.

Gap junctions are specialized cell membrane domains consisting of aggregations of intercellular channels that directly connect the cytoplasm of adjacent cells. Gap junctions coordinate cellular and organ function in tissues and are involved in metabolic cooperation between cells, electrical coupling, synchronization of cellular physiological activities, growth control, and developmental regulation. The gap junction channels allow intercellular exchange of ions, nucleotides and small molecules between adjacent cells. Unlike other membrane channels, intercellular channels span two opposed plasma membranes and require the contribution of hemi-channels, called connexons, from both participating cells. These channels are permeable to molecules as large as 1 kDa, and they have been reported in most mammalian cell types. Two connexons interact in the extracellular space to form the complete intercellular channel. Each connexon is composed of six similar or identical proteins, which have been termed connexins. Connexins (Cx) are a multi-gene family of highly related proteins with molecular weights ranging from 26 to 70 kDa. At least a dozen distinct connexin genes have been identified in mammals, many expressed in a diverse tissue and cell specific pattern. Two distinct lineages have been identified in mammals, one termed class I or β group, in which Cx26, Cx30, Cx31, Cx31.1 and Cx32 fall, and the other termed class II or α group, represented by Cx33, Cx37, Cx40, Cx43 and Cx46.

The 43 kDa connexin protein (connexin 43, Cx43) is a phosphoprotein that is expressed in most tissues, even though the pattern of expression may differ in various cell types (e.g., in the brain, it is found in astrocytes, ependyma and leptomeninges, but not in neurons, oligodendrocytes and pinealocytes; or in the liver, it is present in Ito cells, but not in hepatocytes). Gap junction protein levels change in response to disruption of tissue architecture. For instance, an increased expression of Cx43 was found in early stages of atherosclerosis.

Synthetic peptide corresponding to the C-terminal segment of the cytoplasmic domain (amino acids with N-terminally added lysine) of human/rat connexin-43.

For continuous use, store at 2-8°C for up to one month. For extended storage freeze in working aliquots. Repeated freezing and thawing is not recommended. Storage in "frost-free" freezers is not recommended. If slight turbidity occurs upon prolonged storage, clarify the solution by centrifugation before use.

Connexin-43 (Cx-43) might play a vital role in neuronal migration as it resides in radial glial fibers which are closely associated with migrating neurons. It is also involved in transmembrane NAD+ transport. Connexin-43, which is an element of gap junction, facilitates cell-cell communication. Cx-43 is known to induce [Ca2+]i burst phenomenon in uterine artery endothelial cells (UAECs). Elevated expression of Cx-43 has been observed during early stages of human coronary atherosclerosis. Reduction or alteration in the levels or types of connexin expressed in various cell types correlates with tumor progression and metastasis. However, glioma cells transfected with the oncogene neu (c-erb-B2) exhibit a major reduction in intercellular communication with no decrease in overall expression of Cx43. Different states of rat Cx43 phosphorylation are found during development and lactation. Connexin 43 mutations occur in children whose hearts failed to develop asymmetry and lethal heart malformations occur on knocking out this gene in mice. Polyclonal antibodies reacting specifically with Cx438-11 may be applied in diverse cellular and molecular approaches to the study of gap junctions and their properties, and to correlate their expression pattern in a variety of cell types and tissues with physiological functions or pathological conditions.

RIDADR
NONH for all modes of transport
WGK Germany
2