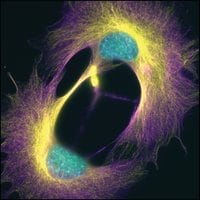 Tubulin is the major building block of microtubules. This intracellular, cylindrical, filamentous structure is present in almost all eukaryotic cells. Microtubules function as structural and mobile elements in mitosis, intracellular transport, flagellar movement, and the cytoskeleton. Tubulin is a heterodimer that consists of α-tubulin and β-tubulin. Both subunits have a molecular weight of approx. 50 kDa and share considerable homology. In addition to α- and β-tubulin, several other tubulins have been identified, bringing the number of distinct tubulin classes to seven. Most of these tubulins have distinct subcellular localization and an emerging diverse set of functions. Out of the seven different tubulins four new members of the tubulin family were identified recently, which consist of δ, ξ, η and ε-tubulin. η and ε-tubulins were discovered by database searches. Microtubular systems contain at least three α-tubulin isoforms. Two isoforms are coded by two α-tubulin genes, which are both transcribed and code for extremely similar proteins. The third isoform is generated by post-translational modification. At least three modifications of tubulin subunits have been described: the phosphorylation of β-tubulin from brain, the removal of the carboxy terminal tyrosine form a-tubulin in vertebrate tissues, and the acetylation of the amino group of lysine(s) in α-tubulin.

α -tubulin, also called tubulin α 4a (TUBA4A), is mapped to human chromosome 2q35. The gene codes for a member of the α -tubulin family, and contains 448 amino acids. α-subunit of tubulin has molecular weight of 50,000.

Monoclonal antibodies recognizing α-tubulin, together with monoclonal antibodies to other tubulin types (β, β-tubulin isotype I +II, β-tubulin isotype III, tyrosine tubulin, and the acetylated form of α-tubulin) provide a specific and useful tool in studying the intracellular distribution of tubulin and the static and dynamic aspects of cytoskeleton.

Anti-α-Tubulin antibody, Mouse monoclonal recognizes an epitope located at the C-terminal end of the α-tubulin isoform (amino acids 426-430) in a variety of organisms (e.g., human, bovine, mouse, and chicken).

The antibody is specific for α-tubulin in immunoblotting assays and may be used for localization of α-tubulin in cultured cells or tissue sections. The antibody reacts best with chicken fibroblasts.

Anti-α-Tubulin antibody, Mouse monoclonal has been used in immunocytofluorescence and western blot analysis.

α-Tubulin or tubulin α 4A (TUBA4A) plays an essential role in cell growth and division. It is also implicated in various cellular processes, such as cell motility, signaling development and cell shape maintenance. Mutation in TUBA4A is associated with the development of various types of cancers, such as oral cancer, breast cancer, rectal cancer, lung cancer and prostate cancer. In addition, variation in the TUBA4A leads to sporadic amyotrophic lateral sclerosis (ALS).

Storage and Stability: Store at 2-8°C for up to one month. For prolonged storage, freeze in working aliquots at -20°C. Repeated freezing and thawing, or storage in frost-free freezers, is not recommended. If slight turbidity occurs upon prolonged storage, clarify the solution by centrifugation before use. Working dilutions should be discarded if not used within 12 hours.

In order to obtain the best results using various techniques and preparations, we recommend determining optimal working dilutions by titration.

RIDADR
NONH for all modes of transport
WGK Germany
2

Which document(s) contains shelf-life or expiration date information for a given product?
If available for a given product, the recommended re-test date or the expiration date can be found on the Certificate of Analysis.
How do I get lot-specific information or a Certificate of Analysis?
The lot specific COA document can be found by entering the lot number above under the "Documents" section.
How do I find price and availability?
There are several ways to find pricing and availability for our products.Once you log onto our website, you will find the price and availability displayed on the product detail page.You can contact any of our Customer Sales and Service offices to receive a quote. USA customers: 1-800-325-3010 orview local office numbers.
What is the Department of Transportation shipping information for this product?
Transportation information can be found in Section 14 of the product's (M)SDS.To access the shipping information for this material, use the link on the product detail page for the product.
What is the immunogen for Monoclonal Anti-α-Tubulin antibody, clone DM1A?
The immunogen for Monoclonal Anti-α-Tubulin antibody produced in mouse, clone DM1A is microtubules from chicken embryo brain. This antibody recognizes an epitope located at the C-terminal end of the α-tubulin isoform (amino acids 426-430) as noted in the following references:Breitling, F., and Little, M., J. Molec. Biol., 189, 367-370 (1986).Wolff, A., et al., Biol. Cell, 63, 319-326 (1988).Serrano, L., et al., Anal. Biochem., 159, 253-259 (1986).
My question is not addressed here, how can I contact Technical Service for assistance?
Ask a Scientist here.
Show more questions
Protocols & Articles