This article highlights the impact that sample matrix effects can have on LC/MS response and discusses two novel approaches to reduce it.

Advancements in electrospray ionization mass spectrometry (ESI-MS) have changed the way identification and quantification of small molecules in biological fluids are conducted. Systems are capable of routinely detecting sub-femtogram levels of analytes. Although these improvements enable low-level detection, ESI-MS is not without limitations, the phenomenon of matrix ionization suppression being a major one. Matrix ionization suppression results from charge competition in the ESI source between components in the sample matrix and the target analytes, and causes diminished, augmented, and irreproducible analyte response.

The Negative Impact of Sample Matrix on LC/MS

Of particular concern with clinical, forensic, and bioanalytical methods is the impact of phospholipids from the matrix. Phospholipids are a major component of cell membranes and notorious for fouling the MS source (Figure 1). They are a major contributor to matrix-induced ionization suppression because they usually co- extract with analytes during sample prep that involves protein precipitation with traditional solid phase extraction (SPE). Additionally, phospholipids often elute in the same timeframe as the analytes from the HPLC column. This co-elution decreases sensitivity which results in increased limits of quantitation and decreased method precision and accuracy. Phospholipids reduce HPLC column lifetime, and their buildup on the column is a problem because they elute erratically, thereby reducing the reproducibility of the method. Excessive gradient elution is needed to wash the HPLC column and the system, which ultimately decreases the sample throughput. The impact of phospholipids on LC/MS experiments has been discussed at length in previous Reporter articles1-3. 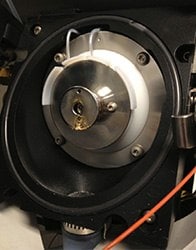 Approach 1: Targeted Matrix Isolation
This approach to matrix reduction targets specific components of the sample matrix. In this example, a targeted phospholipid depletion technology (HybridSPE- Phospholipid) is used for the selective isolation of phospholipids from serum or plasma. HybridSPE-Phospholipid comprises a hybrid zirconia-silica particle packed into 96-well plate or SPE cartridge formats. The electron-deficient empty d-orbitals of the zirconia atoms bond with the electron-rich phosphate groups of the phospholipids via Lewis acid/base interaction. The result is highly efficient phospholipid isolation. Proteins are also removed by precipitation directly in the well plate or tube. Plasma or serum samples are added to the HybridSPE-Phospholipid plate or tube followed by a 3:1 ratio of precipitation solvent. Samples are mixed via draw-dispense or vortex agitation to fully precipitate sample proteins. 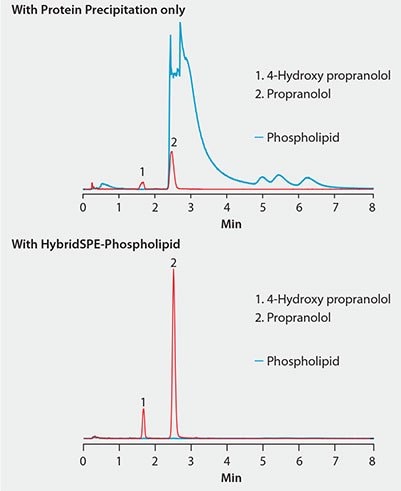 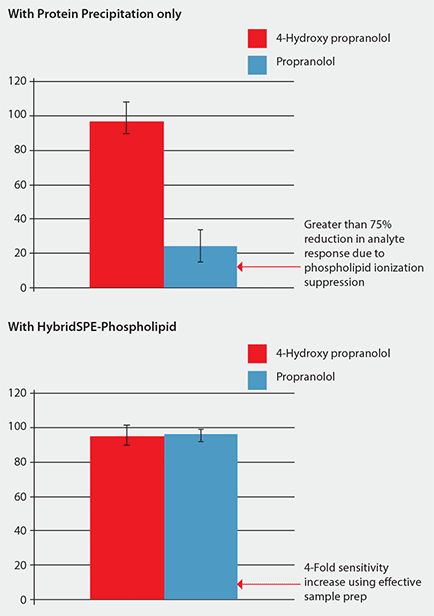 (Analysis conditions same as in Figure 2.)

Approach 2: Targeted Analyte Isolation
The second approach to reduce matrix interference is to target the isolation of analytes while excluding components of the sample matrix. This approach is common in traditional SPE where analyte binding and matrix washing procedures are followed. A continuation of the analyte binding strategy is applied to solid phase micro extraction (SPME) using biocompatible phase chemistries4. Figure 4 shows two configurations of biocompatible SPME (bioSPME) fibers currently available from Supelco.

SPME is based upon an equilibrium distribution of the analytes between the solution (serum or plasma, in this case) and the phase layer on the fiber. BioSPME fibers comprise C18-modified silica particles embedded in biocompatible binder. Analytes are desorbed from the fiber using traditional reversed-phase HPLC solvents and analyzed directly by LC/MS. An interesting property of the bioSPME fiber is that the particle binder shields larger biomolecules from adhering to the fiber. This permits the concentration of target analytes on the fiber without coextraction of the sample matrix. The result is a very unique process, whereby sample concentration and sample cleanup are conducted simultaneously. Because bioSPME is not destructive, multiple extractions of the same sample can be performed.

Figure 5 shows a plasma sample spiked with nine cathinone compounds. In the chromatogram on the top, sample prep consisted of standard protein precipitation. In comparison, the chromatogram on the bottom shows the same sample extracted with the bioSPME fiber. Notice the difference in signal response for both analytes and phospholipids between the two techniques: The bioSPME method gave over twice the analyte response but one-tenth the phospholipid response of the protein precipitation method. This demonstrates the ability of the bioSPME fiber to concentrate analytes from biological samples without interference from matrix components.