The following was generated with the assistance of an outside source using Sigma-Aldrich products. Technical content was generated and provided by:
Dieter Urbach, Bundeskriminalamt (BKA), KT 12 – Zentrale Analytik II, 65173 Wiesbaden, Germany

Derivatization, especially silylation, is commonly used to identify and quantify both known and unknown compounds using GC-MS. It is not limited to small molecules. Even peptides can be silylated, especially when the introduction of deuterium is desired1. N-Methyl-N-(trimethylsilyl)trifluoroacetamide (MSTFA) is a very versatile reagent because it can be used to derivatize many of the functional groups commonly found in organic compounds. It operates by attachment of a nonpolar trimethylsilyl (TMS) group (Figure 1). In most cases TMS derivatives have a lower boiling point than the parent compound, which allows GC analysis at a lower temperature. This reduces the possibility of thermally induced decay of compounds in the injector or on the column. For quantitative analysis the use of catalysts is recommended2-4.

Using Deuterated MSTFA (MSTFA-d9) for Compound Identification
In some cases it is unclear precisely how many of the molecule’s functional groups are affected by the derivatization reaction, especially when dealing with unknown compounds. Using deuterated MSTFA (MSTFA-d9) helps to overcome this problem because the molecular mass of the MSTFA-d9 derivative increases by exactly 9 mass units for each derivatized functional group. Thus, it is possible to calculate the molecular mass of the original compound by taking the mass shift in the MSTFA/MSTFA-d9 spectra into account.

Figure 2 shows the mass spectrum of amphetamine (α-methylphenethylamine) using GC-MS on an SLB™-5ms column. Primary and secondary amines often give an [M-1]+l ion that can cause misinterpretation of molecular mass and failure to identify nitrogen-containing compounds. Amphetamine also generates unspecific and ambiguous major fragments; 44 m/z can match both amines and aldehydes (Figure 2, top). After MSTFA derivatization, the mass spectrum (Figure 2, middle) reveals typical fragments of TMS-derivatives (loss of methyl from TMS), while the target compound amphetamine can be calculated based on the fragment mass 192 m/z as intact molecule (192+15 m/z=207 m/z, TMS-amphetamine).

Using MSTFA-d9 the 192 m/z fragment ion is shifted by 6 mass units to 198 m/z and 9 mass units to 201 m/z (Figure 2, bottom). The first shift indicates the attachment of one TMS group. A shift of 9 mass units is associated with the cleavage of the methyl bond in the aliphatic chain of the amphetamine structure and provides additional information about the fragmentation mechanism. 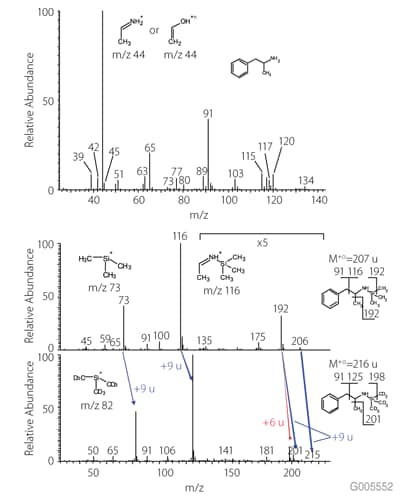 Figure 3 shows the effect of MSTFA derivatization on the resultant chromatography on an SLB-5ms GC column. Despite the presence of other substances in the sample, underivatized amphetamine elutes first followed by its TMS derivative. This example shows how derivatization can be used to alter retention or selectivity to see unknown compounds that might normally coelute with the sample matrix or other components of the sample. 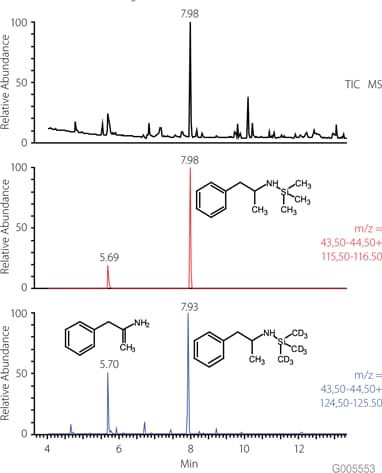 Figure 3.GC-MS Chromatogram (TIC, EIC) of Amphetamine and TMS-Amphetamine Conditions are the same as Figure 2

The majority of current GC-MS systems are equipped with single quadrupole mass analyzers with limited mass resolution. They do not offer the ability to acquire MS/MS or MSn spectra, like triple quadrupole or ion trap mass analyzers do, making them particularly amenable to the MSTFA/MSTFA-d9 derivatization described here. There is no need to change the ionization technique, such as chemical ionization, to obtain the molecular mass or run additional MS/MS experiments to elucidate the structure and composition of a fragment or molecule.

Another advantage of MSTFA and MSTFA-d9 is the comparability of chromatographic properties of their corresponding derivatives. TMS and TMS-d9 derivatives elute within the same time window. Deuterated compounds may elute a few seconds earlier. Thus, researchers can use the compound retention time to find and identify a target compound even at low concentration levels.