What is VSEPR Theory?

The VSEPR structures take the names of 3-D geometric shapes, as in the example trigonal bipyramidal. Under the VSEPR model, a trigonal bipyramidal molecule such as phosphorus pentachloride or PCl5, with a central phosphorus atom and five valence shell electron pairs, looks like two (bi) connected triangular-base pyramids, where each atom is the vertex or corner of a triangular face. 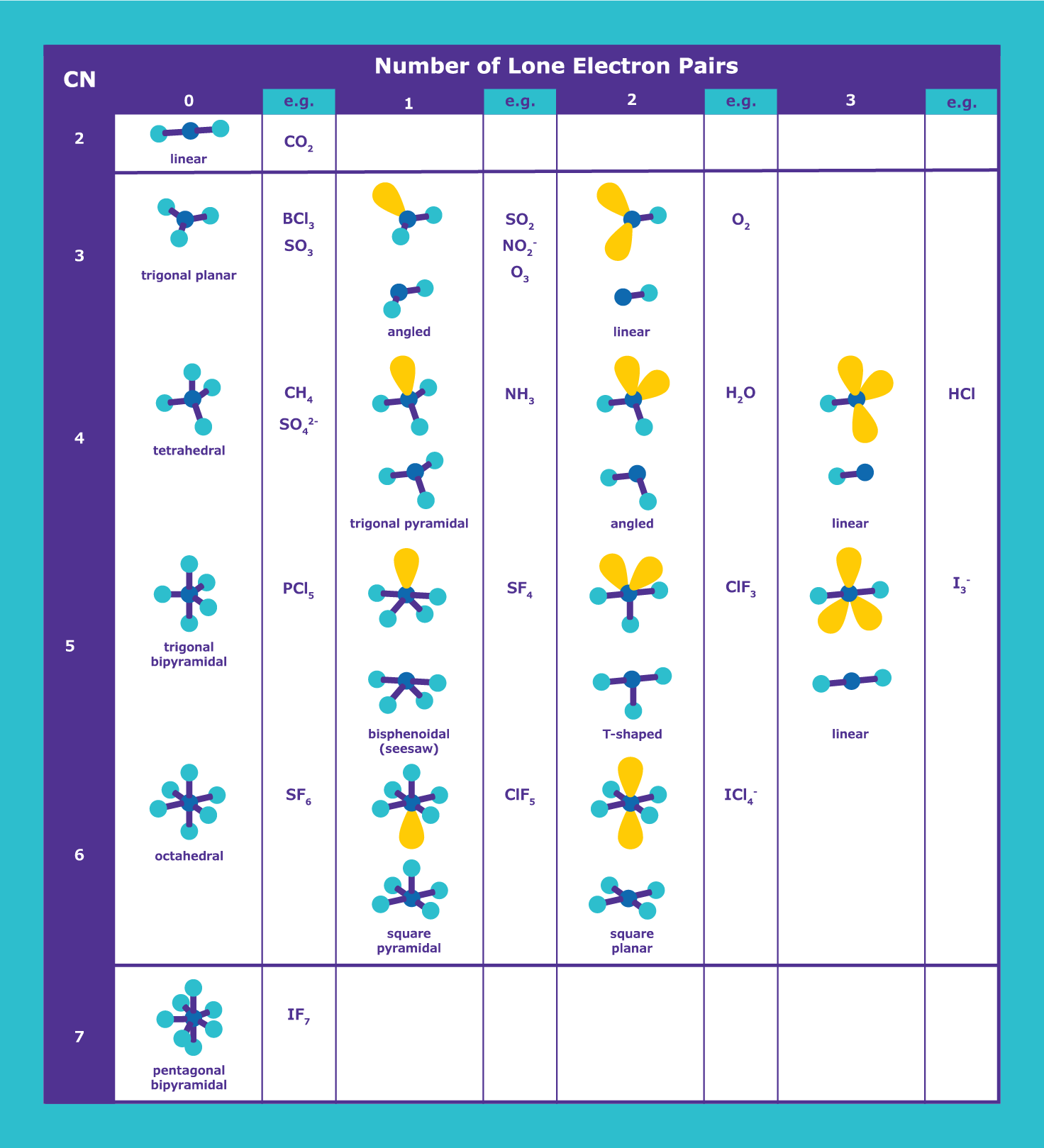 These resources are provided free of charge. We'd be delighted if you find them useful enough to warrant a bookmark or social media share. Or link to them from your website. Just remember to give us credit.

Using the VSEPR Chart to Determine Shape and Bond Angle

To use a VSEPR table, first determine the coordination number or number of electron pairs.

Finally, look up your molecule on the chart by coordination number and number of atoms.

Alternatively, you can count the lone electron pairs, which are also indicated on the chart.

Once you know PCl5 has five electron pairs, you can identify it on a VSEPR chart as a molecule with a trigonal bipyramidal molecular geometry. Its bond angles are 90 ° and 120 °, where the equatorial-equatorial bonds are 120 ° apart from one another, and all other angles are 90 °.

Some other examples shown on the VSEPR chart are sulfur hexafluoride, SF6, whose six electron pairs give it octahedral geometry with 90 ° angles, and CO2, which has two electron pairs and linear geometry.

What does VSEPR Stand for?

VSEPR is an acronym that stands for valence shell electron pair repulsion. The model was proposed by Nevil Sidgwick and Herbert Powell in 1940. Ronald Gillespie and Ronald Nyholm then developed the model into their theory published in 1957; they are considered the developers of the VSEPR theory. The approach was commonly referred to as VSEPR from 1963 to the present.

What are the VSEPR Theory Postulates?

VSEPR is often explained to beginners as eight simpler postulates:

Molecular geometry is a method to determine the shape of a molecule based on the repulsion occurring between bond electron pairs in the outermost (or valence) electron shell. It’s useful to study molecular geometry to get information beyond that provided in a Lewis structure. Many physical and chemical properties are affected by the shape of molecules.

VSEPR is a molecular geometry model that helps predict the general shape of a molecule but doesn’t provide information about the length or type of bonds. VSEPR theory is not effective in molecules where the central atom is a transition metal and thus has a high atomic mass that offsets or weakens the pull of bonded valence electrons.

The VSEPR model is one way to determine molecular geometry. A more advanced way of determining the shape of a compound is electron geometry. Both approaches depend on information about electrons, but the electron geometry model accounts for all electrons. The two models can predict different shapes for the same molecule.