Within the scope of a marketing authorisation procedure for herbal medicinal products, a comprehensive dossier and a certificate of analysis must be compiled for all reference standards used. In this dossier, information on identity (NMR, MS, IR, UV, and others), purity (water content, residual solvents, inorganic impurities, and organic impurities), and the content of the reference standard must be provided. Currently, assay is performed using two methods which preferably are independent from each other. For this purpose, chromatographic methods are usually applied. Content assignment is then performed based on the results obtained from the purity tests and the respective area percentage of the analyte in the chromatographic separation systems. However, this procedure is only applicable for sufficiently pure (>99.5%) reference standards.

Reference standards of natural origin usually have a complex molecular structure, which is why they are rarely accessible synthetically and thus must be isolated from natural sources. When isolating the substances from plants, however, a purity exceeding 99.5% can only be achieved with considerable effort. In addition, the scope of isolation purification is performed via chromatographic methods, thus the same methods are usually applied for content and for purity analysis within the framework of certification. This redundancy results in the risk that impurities that could not be separated during purification may also be overlooked during certification. Such impurities are frequently biogenetically related to the analyte and display very similar structures, which makes analytical separation even more difficult. Hence, the selectivity (or specificity) of themethod applied for purity testing plays a central role, especially with respect to reference standards isolated and purified from natural sources. As a result, reference standards isolated from natural sources can only rarely be certified according to the relevant guidelines by using the established procedure.

Avoiding all problems described, “direct” or “relative” primary methods of measurement that convey a direct traceability to the SI units ensure a higher metrological quality1. These methods are increasingly applied for content assignment of natural products used as pharmaceutical reference standards.

Quantitative NMR spectroscopy (qNMR) is a potential relative primary method2. Employment of qNMR simplifies and increases the reliability of the establishment of reference standards and their certification. The most important basis of quantitative NMR spectroscopy is the direct proportionality of the signal intensity with the number of nuclei contributing to the resonance line.

As an example, the spectrum of vitexin-2"-O-rhamnoside containing 2-hydroxy-3,5-dinitro benzoic acid as an internal standard is shown in Figure 1. 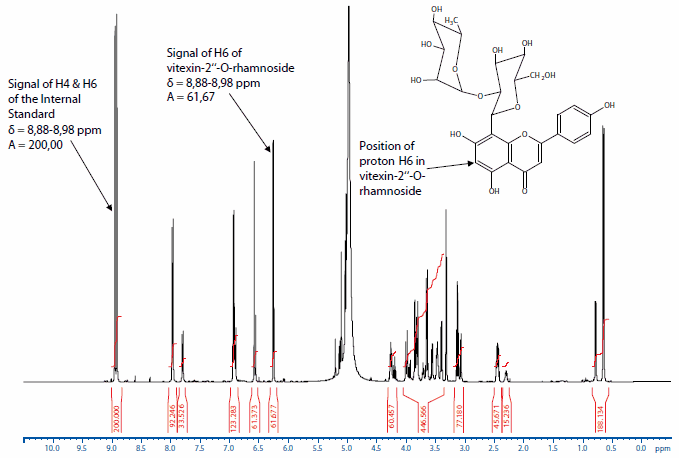 Ultimately, not only content assignment could be performed using the method described, but also the proof of identity in one step using the NMR method in the classical way for structural analysis. Hence, the supplied substance requiring certification, for instance the very expensive natural products, could essentially be decreased, thus reducing the high costs associated with the extensive effort in connection with isolation and purification.

The European CCQM (Comité Consultatif pour la Quantité de Matière) ensures the harmonisation of physical parameters as well as accurately describing and improving the accuracy and precision of measurement methods in analytical chemistry. From CCQM directives, the German Federal Institute for Materials Research and Testing (BAM) has been charged with defining the capabilities of quantitative NMR spectroscopy and proving its effectiveness in international interlaboratory tests3. In this respect, BAM acts as a national metrology institute for Germany. Within a public-funded project in Germany, comprehensive validation results for the certification of reference standards could be established, which are largely publicly available now4. Since NMR spectroscopy has the character of a primary method, as demonstrated in publications for the CCQM3,4, all requirements are satisfied to perform metrologically top-quality, SI-based certifications for pharmaceutical reference materials. In Ph. Eur. the monograph on NMR spectroscopy was revised based on the results of the research project, now permitting the use of qNMR as an official method in pharmaceutical analysis.

During realisation of this project, qNMR could be proven to be basically appropriate as a potential primary analyticalmethod for the certification of natural products as reference standards for quality control of herbal medicinal products. Using a total of 14 samples of selected reference materials relevant for the analysis of herbalmedicinal products, themetrological quality of the quantitative 1H-NMR, and hence its suitability for pharmaceutical analysis, were investigated.

The qualitative assignment of signals in the spectrum (specificity and selectivity) was shown to be the most important part of the quantitative analysis. The larger and more complex the molecule, the more difficult this evaluation became. Additionally aggravating was the fact that, in the case of complex compounds, impurities with a very similar structure differed just slightly in the spectrum and/or only at a few frequencies. This problem, however, is not NMRspecific but can be transferred to all spectroscopic and chromatographic methods. Nevertheless, where other methods fail because the analyte cannot be selectively quantified, qNMR provided accurate results in such cases by evaluation via further signals in the spectrum. Furthermore, for some substances, additional impurities not detected using chromatographic methods could be detected and even partially identified and quantified by qNMR. For each target analyte, selectivity of the signals used for analysis was established bymeans of 1H-NMR (partly using 13Cdecoupling) and 1H,13C hetero correlated 2D NMR techniques (HMQC, HMBC), and for assignment of signals originating fromimpurities by H,H correlated 2DNMRtechniques (COSY).

As a result, a standard operating procedure is now available for the recording, processing and evaluation of qNMR measurements for the certification of reference standards.

To confirm the acceptance of qNMR results by the German national regulatory authority (BfArM) and the European EMEA, these studies were conducted according to the ICH guidelines5. By means of an organised and evaluated national interlaboratory test with 22 participants from industry, research and university facilities, the generalisation of laboratory internal validation was proved unequivocally on the basis of one substance.

In order to determine the metrological quality (accuracy and precision), the complete uncertainty budget according to ISO guidelines was established for assay using qNMR spectroscopy. Generally, an expanded uncertainty of measurement (k = 2) of ≤ 1g/g% was determined for all substances investigated.