The recent emergence of a number of highly functional nanomaterials has enabled new approaches to the understanding, diagnosis, and treatment of cancer. Of these, a variety of functional magnetic nanoparticles, including superparamagnetic ferrite nanoparticles of iron, cobalt, manganese, and nickel have proven themselves as particularly beneficial for biomedical applications.1–6 In particular, multifunctional ferrofluids (MFs) are now being intensively studied in order to unlock their promise for future therapies.5,6

A ferrofluid is a suspension of magnetic nanoparticles which behaves as a “liquid magnet” under the presence of a permanent magnetic field. Ferrofluids can be easily modified to contain different surface functional groups of both biological and non-biological origin7,8 for the conjugation of therapeutic payloads and imaging molecules, enabling enhanced specificity in targeted therapeutics and diagnostics. Furthermore, MFs exhibit the unique capability to produce heat when exposed to an alternating magnetic field.9 Since cancer cells exhibit low tolerance for elevated temperatures (above 42 °C), it is expected that localized heat from MFs could be used for the targeted treatment of cancer cells (hyperthermia treatment).10–12 Magnetic hyperthermia can also be used to aid in the release of a therapeutic payload from MFs, resulting in enhanced release efficiency in the immediate tumor environment.

MFs exhibit a number of unique characteristics that have the potential to impart significant therapeutic advantages, including:

Recently, we have developed a variety of iron oxide-based MF hybrid systems with different surface functionalization including dendrimers,13 lipids,14 hydrogels,15 bio-degradable polymers, citric acid,16 and silica.17 The surface functional groups allow multifunctionality in these iron oxidebased ferrofluids and make them thermo- and/or pH-responsive.13,14 The iron oxide based MFs are highly stable in aqueous conditions and have been successfully tested for the delivery of both hydrophilic and hydrophobic drugs, along with magnetic hyperthermia applications in cancer cell lines as well as in subcutaneous tumor models in mice. This article presents an overview of the therapeutic performance of following systems toward various cancer cell lines:

These formulations have also been evaluated for their performance in dual mode cancer therapy, utilizing magnetic hyperthermia in synergy with chemotherapy, non-invasive MR imaging, and electrochemical biosensing. Some of these hybrid systems have been further explored for in vivo applications.

Hydrogels are hydrophilic, crosslinked polymers existing in a colloidal gel state. Due to their tailorable physical, chemical, and biological properties, they have been tested in numerous biomedical applications. It has been shown that the encapsulation of ferrofluids within hydrogels can result in improved biomedical properties.18 For example, Lin et al. reported the delivery of chemically modified antisense RNA oligonucleotides using degradable poly(ethylene glycol) (PEG)-based hydrogels as a promising cancer therapy.19 Zhang and co-workers successfully employed chitosan and β-glycerophosphate-based magnetic hydrogels for sustained delivery of the BCG vaccine in the treatment of bladder cancer in female Wistar rats.20 Baeza and co-workers utilized the thermo-responsive copolymer of poly(ethyleneimine)-b-poly(N-isopropyl acrylamide) in combination with mesoporous silica and iron oxide nanoparticles as a platform for magnetic field induced drug release to combat multidrug resistance in cancer cells.21 Figure 1.A) Schematic depicting the thermo-responsive collapse of the magnetic nanohydrogel due to RF exposure leading to the release of the therapeutic drug and B) MR contrast characteristics of magnetic nanohydrogel. The r2 is the slope of the straight-fit line drawn for 1/T2 vs. iron concentrations of the corresponding sample; T2-weighted phantom images at five serially diluted iron concentrations of the same samples.22

We have also explored the in vivo evaluation of thermo-responsive poly(N-isopropyl acrylamide)-chitosan based magnetic nanohydrogel (MNHG) in a subcutaneous fibrosarcoma tumor model for use in localized delivery of chemotherapeutics.23 For this, the biocompatibility and biodistribution of the MNHG was evaluated in Swiss mice, while efficacy in tumor growth inhibition was studied under the influence of an AC magnetic field (AMF). The ex vivo time-dependent pattern of accumulated MNHG in vital organs like lung, liver, spleen, kidney, and brain was also investigated. The tumor-bearing mice were subjected to hyperthermia by exposure to an RF magnetic field of 325 Oe operating at 265 kHz following intratumoral administration of dose I. The tumor size was measured at intervals of 72 h for a period of 2 weeks. The study revealed that the combinatorial therapy decelerated the growth of the tumor by ~3-fold (size; 1,545 } 720 mm3) as compared to the uninhibited exponential growth of the tumor (size; 4,510 } 735 mm3) in control mice. These results clearly demonstrate that MNHGs have significant potential for use as platforms for combined thermo-chemotherapy.

Magnetic nanovesicles containing paclitaxel (Prod. No. T7402) and a dextran-coated biphasic suspension of La0.75Sr0.25MnO3 and Fe3O4 magnetic nanoparticles were developed for use in chemotherapy and self-controlled (Tc tuned) hyperthermia.24

Sequential release of paclitaxel at 37 °C for 1 h followed hyperthermic heating at 44 °C for another 1 h (as expected for intratumoral injection) results in cumulative toxicity toward the cancer cells. Figure 2 shows that under exposure to AMF, the temperature remains controlled at 44 °C and a synergistic cytotoxicity of paclitaxel and hyperthermia is observed in MCF-7 cells. This indicates that magnetic nanovesicles containing biphasic suspension of La0.75Sr0.25MnO3 and Fe3O4 nanoparticles encapsulating paclitaxel have potential for combined self-controlled hyperthermia and chemotherapy.

Figure 2.A) Transmission electron micrographs of magnetic liposomes containing biphasic suspension of La0.75Sr0.25MnO3 and Fe3O4 nanoparticles in 10:1 ratio. Inset (B, C, D) shows the diffraction pattern of magnetic liposomes, transmission electron microscopy image of a blank liposome, and diffraction pattern of a blank liposome. E) Cellular toxicity of MCF-7 cell line during hyperthermia experiments. F) The temperature profile during the hyperthermia experiment, as well as only for the AC magnetic field.24

Dendrimers are a class of hyper-branched symmetrical polymers that originate from a central core with repetitive branching units. Due to their structural properties and controlled size, dendrimers have emerged as an attractive material for biomedical applications, particularly as carriers for therapeutic cargos. Recently, there have been attempts to combine the unique features of dendrimer chemistry with the versatility of magnetic nanoparticles to provide a platform for enhanced therapeutics and biomedical applications.25 For example, Rouhollah and co-workers combined magnetic nanoparticles with different generations of polyamidoamine (PAMAM) dendrimers (Prod. Nos. 664138 and 664049) to develop pH-responsive platforms and deliver doxorubicin to resistant breast cancer (MCF-7) cells.26 Yalcin and co-workers used PAMAM-coated magnetic nanoparticles to deliver the anticancer drug gemcitabine and retinoic acid to pancreatic cancer and stellate cells, successfully eliminating the cancer cells.27 Boni and co-workers used amphiphilic PAMAM in combination with hydrophobic iron oxide nanoparticles to study relaxivity for MRI applications.28 We recently developed dendrimer-conjugated iron oxide nanoparticles and explored the potential therapeutic efficiency of PAMAM-Fe3O4-DOX triads.13 Different generations (G) (G3, G5, and G6) of PEG-PAMAMs were used to modify the surface of glutamic acid conjugated Fe3O4 nanoparticles (Figure 3). The biodistribution and biocompatibility of these DOX-loaded dendritic magnetic nanoparticles in C57BL/6 black mice are currently under investigation. 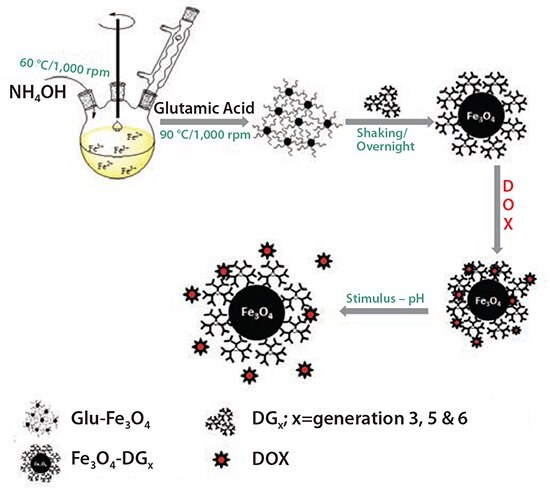 Figure 3.Illustration of the synthetic procedure for the synthesis of PAMAM-Fe3O4-DOX triads and their application in pH-responsive drug delivery.13

Lipid-based vesicles have attracted much interest in biomedical applications. Their tailorable composition, size, chemical properties, and ability to encapsulate drugs make lipids the first choice as delivery vectors. Results from Nappini and co-workers reveal that a low frequency alternating magnetic field can be utilized as the external stimuli to release drug molecules from lipid coated magnetic nanoparticles.29 Park and co-workers have combined hyaluronic acid-based liposomes with commercially available magnevist as a platform for the delivery of doxorubicin to breast cancer cells and MRI of tumors.30 In fact, the use of magnetic liposomes in gene delivery has also been reported. Recently, cholesterol and 1,2-distearoyl-sn-glycero-3-phosphocholine (DSPC)-based liposomes have been used by Jiang and co-workers to encapsulate iron oxide nanoparticles for the delivery of the gWiz-GFP plasmid DNAencoding green fluorescent protein (GFP).31 A new pH- and thermosensitive drug delivery system consisting of a thin lipid (Prod. No. P0763) layer encapsulating mesoporous magnetite nanoassemblies (LMMNA) has been developed by our group (Figure 4). These LMMNAs are capable of carrying and delivering two anticancer drugs, namely hydrophilic doxorubicin hydrochloride (DOX) and hydrophobic paclitaxel (TXL), simultaneously.14 This hybrid system also acts as a heating platform when exposed to an AMF and exhibits a very high loading efficiency. The experiments reveal an improved in vitro cytotoxic effect when both drugs are delivered simultaneously in cervical cancer (HeLa), breast cancer (MCF‑7), and liver cancer (HepG2) cells. The application of an AMF for 10 min substantially improves the cell killing efficiency due to the simultaneous thermo and chemotherapy. 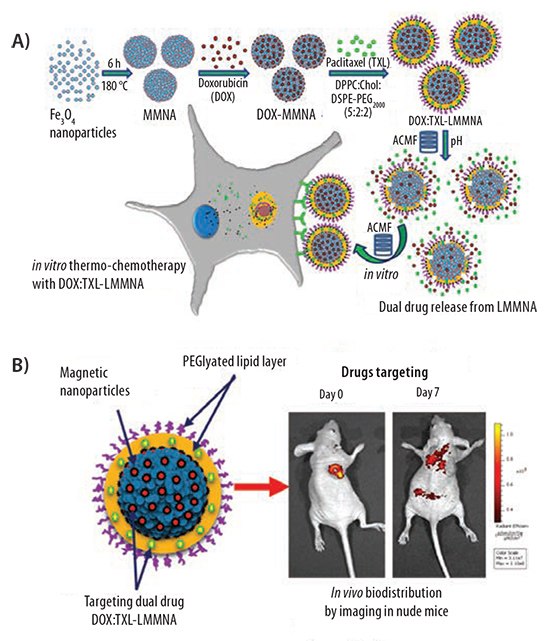 Figure 4.A) Illustration of pH-sensitive and thermosensitive LMMNA as a dual drug delivery system containing doxorubicin (DOX) and paclitaxel (TXL). Drug release is triggered by an AC magnetic field applied to the tumor cells (B) in vivo biodistribution and thermo-chemotherapy studies controlled through fluorescence imaging.14

LMMNAs are currently under investigation as a dual drug delivery system for in vivo biodistribution and thermo-chemotherapy studies in subcutaneous tumor-bearing nude mice through fluorescence bioimaging. The biodistribution of these non-targeted nanoparticles is being studied in non-tumored nude mice by optical fluorescence imaging and measurement of Fe concentration in different vital organs. Biodistribution studies show a greater accumulation of lipid-coated magnetic nanoparticles in the large intestine, lung, liver, spleen, and stomach than in the kidney and heart. Tumor regression was also monitored by bioluminescence imaging as well as repeated fluorescence imaging due to the organ uptake of LMMNA-DOX:TXL. The combination therapy using an AC magnetic field with dual chemotherapeutics is currently under investigation in combating tumors in mice models.

Multifunctional ferrofluids are one of the most intensively investigated functional nanomaterials for biomedical applications. The potential of external magnetic fields to manipulate the nanoparticles has enhanced their individual advantages in the direction of targeted chemotherapeutics, diagnostics and imaging of cancer. Multifunctionalized ferrofluids have been shown to offer improved cancer treatment and disease management. Research with multifunctional ferrofluids has moved forward from preliminary in vitro studies to a promising in vivo stage.