The development of genetic engineering and cloning has opened many possibilities of expression and isolation of heterologous proteins for research purposes. Considerable advances in technology have enabled expression and isolation of recombinant proteins in large scale. However, for large scale applications such as enzyme, antibody or vaccine production, the amount of protein required is considerably high. In such cases the system in which the protein is expressed must be easy to culture and maintain, grow rapidly, and produce large amounts of protein. Moreover, mammalian proteins also undergo various post-translational modifications. These requirements led to the discovery of protein expression systems. The various protein expression systems are bacteria, yeast, insect or mammalian systems.

The process of expressing a recombinant protein in an expression system requires the following information/components.

The core steps involved in producing the desired recombinant protein are similar across the various expression systems (Figure 1). 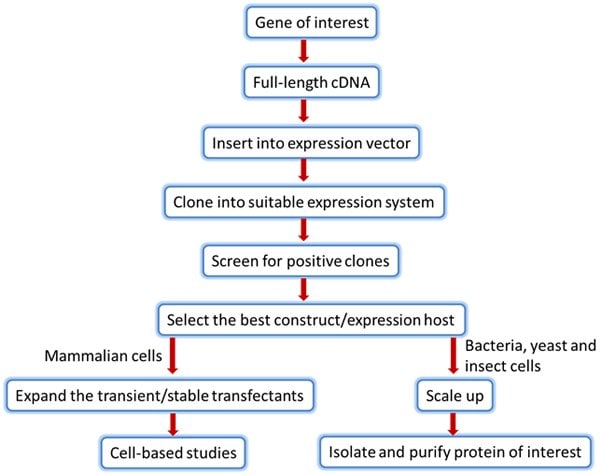 Bacteria act as rapid and simple systems of expressing recombinant proteins due to the short doubling time. The media required to culture them are not expensive and the methods adapted to scale-up bioproduction are straightforward. The most widely used host system is E. coli since there is ample knowledge about its genetics, genome sequence and physiology. The genetic manipulation is easy and it also grows to high densities and is suitable for large-scale fermentations. However, the cell wall of E. coli contains toxic pyrogens and the expressed proteins may have to be extensively tested before use. 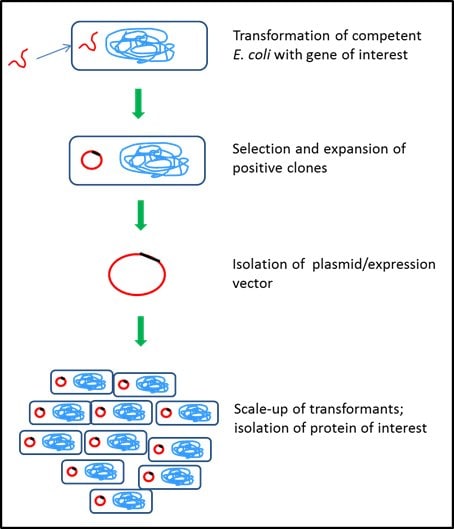 The highly developed genetic system, ease of use, reduced time input and costs have made S. cerevisiae an attractive organism for the expression and production of recombinant proteins. Yeasts are able to carry specifically designed plasmids and this ability is valuable in a recombinant protein expression system. The plasmid used consists of restriction sites that can be used to insert the gene sequence of interest. Transformation of yeasts with the plasmid produces the desired protein and can be appropriately scaled up. 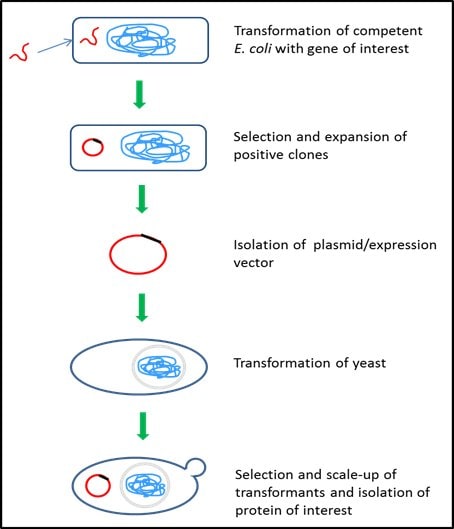 The cell lines derived from Spodoptera frugiperda, Sf9 and Sf21, are frequently used as recombinant protein expression system. Baculovirus is a lytic, dsDNA virus, routinely amplified in cells of the insects belonging to Lepidoptera family. It is noninfectious in vertebrates and its promoters are inactive in mammalian cells. 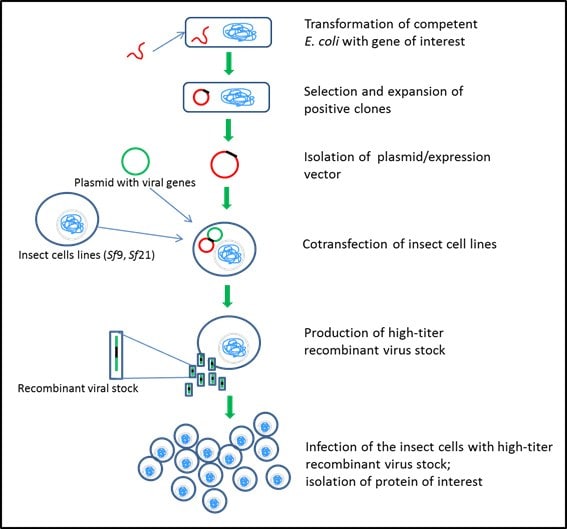 The main challenge of using mammalian cells for expressing recombinant proteins is the reduced efficiency and levels of the protein expressed. However, cell lines such as HEK293 and CHO have been developed as efficient transient and stable expression systems, respectively. HEK293 cells are transiently transfected using liposomes, calcium phosphate or PEG as transfection reagents. Though transient expression is relatively easy and simple, scaling up is technically challenging. CHO cells are commonly used to stably express large quantities of recombinant proteins. The process involves transfection of DHFR-deficient CHO cells with the gene of interest and a DHFR selection cassette. The transfected cells are then screened in the presence of methotrexate to obtain stably transfected cell pools. The selection and expansion process takes 2-3 months 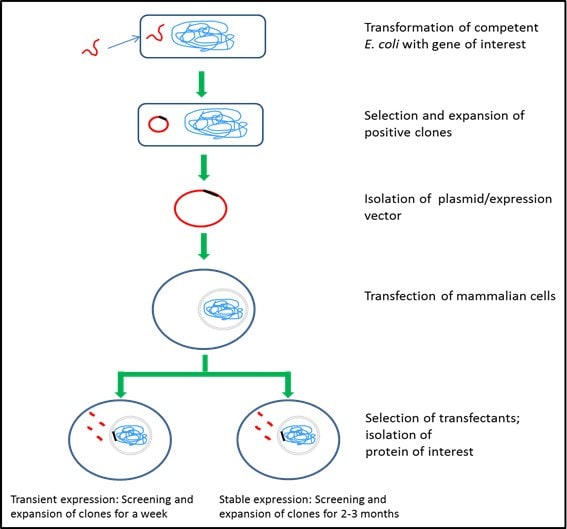 The following table compares the four protein expression systems and their respective advantages and disadvantages:

Choose an expression system that expresses the protein with all the desirable post-translational modifications. Irrespective of the choice, we offer a wide range of competent cells, insect and mammalian cell lines and related products that suit any protein expression system.