Our lentiviral vector systems have been developed with enhanced safety features. Numerous precautions are in place in the design of our lentiviruses to prevent replication, including eliminating virulence genes and splitting key genes among different vectors. Still, good handling practices are a must. Read on to understand more about lentivirus safe usage FAQs.

To make lentivirus safe, four viral accessory genes have been deleted leaving the minimum number of genes necessary to make replication-deficient lentiviral particles. These have been separated across multiple plasmids: 3 for 2nd generation packaging systems and 4 for 3rd generation packaging systems. This means 3 or 4 recombination events would need to occur simultaneously to generate replication competent lentiviruses.

Below we address some common concerns about lentiviral safety. For further questions and discussion, please contact us. 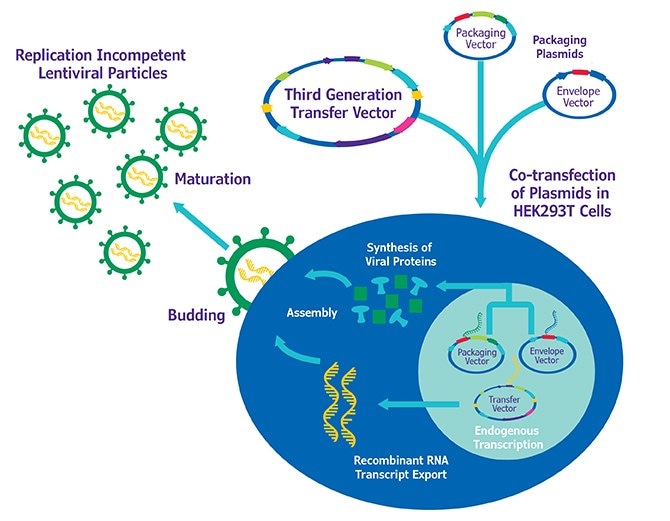 For enhanced safety, the structural and accessory genes necessary to produce viral particles are separated onto multiple plasmids. All wild-type virulence and replication genes are deleted. All Sigma-Aldrich® lentiviral transfer vectors contain a modified, self-inactivating 3' long terminal repeat (SIN/LTR) which renders the resulting lentiviral particles replication incompetent. Lentiviral particles are packaged in producer cell lines such as HEK293T cells. Upon co-transfection of the plasmids, all required sequences are available to produce and package a viral particle containing the transgene of interest. Only the region between the viral LTRs of the transfer vector is packaged within the viral capsid.

How serious are lentiviral biosafety concerns? Is there a realistic risk of HIV infection?

Viral vector systems have been developed with enhanced safety features as described above. Resulting particles are replication-incompetent and deletion in the U3 portion of the 3’ LTR eliminates the promoter-enhancer region, further negating the possibility of viral replication. The system has also removed virulence genes which are not necessary for viral packaging. In combination, these features have improved biosafety and handling. It is recommended to use a third generation transfer vector for its enhanced biosafety features. While there is no documented occurrence of third generation transfer vectors producing replication competent virus, it is important to monitor for replication competency when performing routine lentiviral packaging. NIH guidelines recommend replication-incompetent lentiviral particles be handled as Risk Group-Level 2 (RGL2). Additional precautions may be required based upon local, state, or country regulations.

Given the size of the particles and the current VSV-G pseudotype, it is not expected that lentivirus will pass through the BBB (although we have no data to support this claim). Multiple researchers targeting areas of the brain have shown that direct cranial injection is optimal.

Is pLKO.1 vector an HIV-based vector and if so are there any biosafety issues?

The pLKO.1 vector and its derivatives are lentiviral (HIV)-based plasmids. Lentivirus is regarded as a biosafety level 2 material and safe to use due to its modified features (deletion of a number of accessory virulence genes , minimal genome of the viral particles, non-replicating and self-inactivation features), making it incapable of producing virus once infected into the host cell. Please consult with your institution’s biosafety officer on specific requirements.

How can I minimize environmental impact and regulatory risks?

Good laboratory practices are necessary to prevent any forms of contamination that may result in an opportunity for a replication-competent virus to form. Replication-competent virus testing is necessary. Because viral structural genes have been placed on different genetic units, multiple recombination events must occur before a replication competent helper virus is generated. Furthermore, areas of homology among the units expressing the helper virus proteins have been minimized. Also, heterologous promoters for the helper virus proteins are used. CDC-directed guidelines for BSL-2 + practices should govern the handling of large amounts of virus and concentrated virus. Our Sigma Aldrich production facilities routinely conduct standardized procedures to test for the spontaneous production of a replication-competent lentivirus (RCV). In over ten years of manufacturing on site, we have never observed replication competent virus; data available on request.

What should I do with material that has been in contact with lentivirus?

Soak all virus and any techware and tips that touch virus or virus-containing cells in 10% bleach for 20 minutes before discarding into biohazardous waste. Please consult with your institution’s biosafety officer for specific instructions.

Please contact us with any other questions you may have about the safe usage of lentiviral vectors and in the development of your gene editing project.