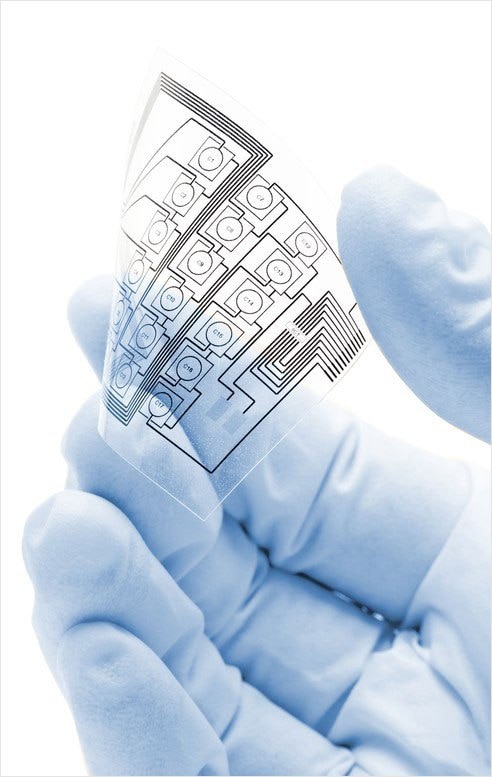 Small molecule organic electronics are typically fabricated using vacuum-based deposition methods to transfer thin films of organic materials onto the substrate surface. Organic electronics can be made from conductive polymers using low-cost solution processing methods. Semiconductor polymers can be made soluble and turned into an ink, making it possible to print electronic circuits directly into large plastic sheets. These materials are compatible with large-area, roll-to-roll manufacturing processes, which can easily be scaled-up for rapid production at lower cost.

Organic conductive materials are used in:

Organic light-emitting diodes (OLEDs) are electroluminescent devices consisting of an organic semiconductor emissive layer sandwiched between an anode, which is positively charged to inject holes, and a cathode, which is negatively charged to inject electrons, and transport layers that permit different electrical charge carriers to flow into the semiconducting emissive layer. Light is generated directly when charges injected at the electrodes recombine in the organic layer. OLEDs produce vibrant colors and brighter light, providing better contrast in displays. Due to the thinner, more flexible properties of organic materials, OLEDs can be used in curved monitor screens, foldable or rollable mobile devices, and wearable devices.

Organic transistors are the basic building blocks for flexible integrated circuits and displays in high-performance electronics. Transistors switch power on and off. Source and drain electrodes have direct contact with an organic semiconductor. The gate electrode is isolated from the semiconductor by the dielectric insulator. When voltage is applied to the gate, it makes the semiconductor more or less conductive, either allowing or preventing electrical current to flow between the source and drain. All components, ranging from conductors (for electrodes) and semiconductors (for active channel materials) to insulators (for gate dielectric layers), can be composed of organic materials. Thin-film transistors are a special type of field-effect transistors, in which the semiconductor, electrode and dielectric layers are deposited as thin films onto a supporting substrate. Common electronic applications include RFID tags or electronic paper.

Organic electronic materials can also be used as donor and acceptor materials to convert light into electricity in solar panels. In OPVs, photoactive layers of semiconducting organic materials are sandwiched between two electrodes to generate photocurrents. Since the donor absorbs the solar photon flux, donor materials must have wide optical absorption to match the solar spectrum. Organic hole-transport materials (HTMs) used in perovskite solar cells have proven to be particularly efficient in maximizing charge transport and harvesting solar energy.

WEBINAR - Light Energy Harvesting with Semiconductor Nanostructures
Recent advances in nanotechnology have championed many new materials to capture and convert light energy. Semiconductor nanostructures with tunable photoresponse can capture the visible and near IR photons quite effectively.