Molecular cloning is used to assemble recombinant DNA molecules and to direct their replication within host organisms, making multiple DNA molecules. Cloning involves the replication of one molecule to produce a population of cells with identical DNA molecules. It is commonly used to amplify DNA fragments containing whole genes or any DNA sequence (such as promoters, non-coding sequences and randomly fragmented DNA). Molecular cloning is the process of inserting the gene-of-interest (GOI) into a plasmid vector and this vector is then inserted into a cell that expresses the protein encoded by the GOI. Once protein is expressed in the cell, the protein expression can be used for different studies (such as cell signaling, morphology or other aspects).

Cloning is not only creating copies of a gene or other cellular component but also changing a gene within a sequence of DNA and then replicating it. To amplify any DNA sequence in a living organism, the sequence must be linked to an origin of replication and capable of directing the propagation of itself and any linked sequence (for example: Rapid DNA Dephos & Ligation Kit can be used for cloning).

Molecular Cloning is used for the following:

Cloning of any DNA fragment essentially involves the following steps:

The detailed article on molecular cloning can be found in the Molecular Biology handbook.

In the process of molecular cloning, various problems are faced and that can be checked. Here below are few possible causes and recommended solutions: 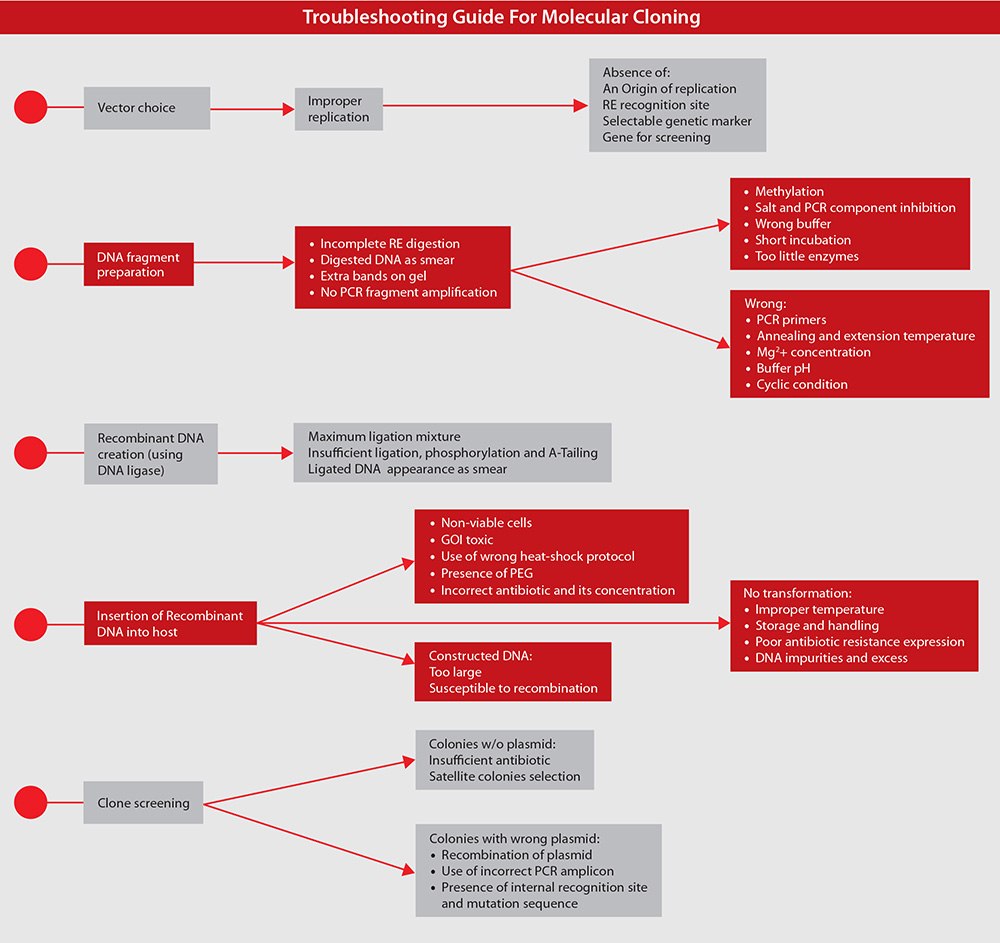 The digested DNA ran as a smear on an agarose gel.

Extra bands or a smear on the gel

If larger bands are seen in the gel than expected, this may indicate binding of the enzyme(s) to the substrate: May need to lower the number of units in the reaction and addition of SDS 0.1–0.5% (for example: Sodium dodecyl sulfate solution) to the loading buffer to dissociate the enzyme from the substrate may help.

No amplification of PCR fragment

This may be caused due to the following reasons, which need to be checked during the experiment2:

The ligated DNA ran as a smear on an agarose gel

In addition to the possible causes shown in the Troubleshooting Guide, the following problems can also be associated with low or no transformation efficiency and can be checked.

Colonies without a plasmid:

Colonies containing the wrong/incorrect construct may be due to: