MRI/MRS: Use of Isotopes in Hyperpolarization

The single greatest impediment to the use of nuclear magnetic resonance spectroscopy (MRS) and magnetic resonance imaging (MRI) in vivo is its limited sensitivity1. Hyperpolarization promises enhanced magnetic resonance, with signal amplification up to 200,000-fold greater than we have today, this technology will detect attomoles to nanomoles of isotopically labeled specific disease markers in under one second and will permit whole-body scans of humans with existing or cheaper MRI scanners, to be performed in tens of seconds, and thereby bring the overall cost of medical imaging down by one to two orders of magnitude. An immediate benefit of this advance would be the provision of routine screening MR examinations anywhere with a stable power supply. This innovative idea of real time imaging has already made great strides in recent years, using three different methodologies of hyperpolarization a) Parahydrogen And Synthesis Allows Dramatically Enhanced Nuclear Alignment (PASADENA) a.k.a Parahydrogen Induced Polarization (PHIP)2-5; b) Dynamic Nuclear Polarization (DNP)6,7 and c) Xenon and Helium hyperpolarization8,9.

In the PASADENA method of hyperpolarization, parahydrogen gas is used for creating highly polarized nuclei (13C/15N)2-5, replacing the thermal equilibrium polarization determined by the Boltzmann distribution by polarizations of order unity in a growing variety of molecular species. PASADENA is relatively inexpensive chemical methodology of achieving hyperpolarization within seconds and it is possible to perform several experiments within a very short time. However, this technique is limited to unsaturated molecules and is not a general methodology of achieving hyperpolarization in a wide variety of molecules of biomedical interest. Several prototypes of PASADENA polarizers are currently used by various research groups. The DNP methodology6 uses low temperature, high magnetic field, and the unpaired electron of selected species (e.g. triaryl radical) to strongly polarize nuclear spins in the solid state in hours and is a more general methodology of hyperpolarization. The solid sample is subsequently dissolved rapidly in water to create a solution of molecules with hyperpolarized nuclear spins. The polarization is performed in a DNP polarizer, consisting of a separate superconducting magnet (3.35T) and a liquid-helium cooled sample space. The DNP process entails irradiating the frozen sample with 94 GHz microwaves. Subsequent to polarization, the sample is dissolved by an injection system inside the DNP magnet. The dissolution process effectively preserves the nuclear polarization. High cost of instrumentation and cryogen makes this technique relatively expensive. Currently, DNP polarizer is commercially available as "HyperSense" from Oxford Instruments, UK for in vitro studies. Exciting in vivo applications using DNP polarizer developed by Cytiva utilizing 13C labeled pyruvate has been reported by Dr. Klaes Golman's group at Cytiva, Malmo 7 and Prof. Sarah Nelson's group at University of California, San Francisco10.

High polarization in 129Xe and 3He was achieved within minutes to hours by optical pumping in weak B field near ambient T. The polarized gases can be stored for ~ 8500 s at 77 K or 106 s at 4 K. The cost of photons (laser) is low and falling, thereby making this an inexpensive method of hyperpolarization. Currently, the Xenon polarizers developed and manufactured by Xemed (Prof. William Hersman's group at University of New Hampshire) are capable of highly polarized (P>50%) high volume (>50L) of 129Xe11. Several groups have applied hyperpolarized Xenon and Helium for exciting applications, mostly pertaining to lung imaging. The spin order on Xenon may be transferred to a spin with long T1 (13C/15N),therefore providing a more general methodology of hyperpolarization of other nuclei12.

My research group has developed several 13C/15N labeled precursors for in vivo PASADENA hyperpolarization. In vivo 13C imaging of hyperpolarized PASADENA reagents was accomplished on sedated rats with a cannula introduced into the right jugular vein. A syringe containing hyperpolarized 13C reagent was connected and injected immediately after hyperpolarization while 13C imaging was in progress. After rapid injection of hyperpolarized 13C imaging reagent, 3D FIESTA images capture the same structures in 13C images, each acquired in 0.31 seconds. The supplying catheter, right atrium and right ventricle, the left ventricle of the heart and the left and right lung were observed with 13C imaging as indicated in Figure 1. These preliminary results13 demonstrate that imaging can be accomplished 1) using fast, sub-second 13C MRI, 2) visualizing hyperpolarized reagents in three dimensions, 3) over time, and 4) both in vitro and in vivo. 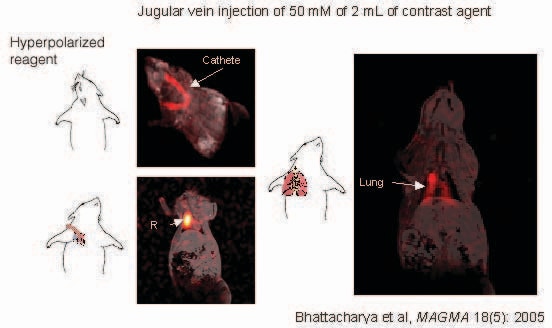 Our labs and others have used conventional (thermally polarized) 13C labeled isotopes of intrinsic biological molecules such as glucose and acetate which are metabolized in the body via the TCA cycle that can be tracked with MR spectroscopy14,15 but over hours of scan time. This is where hyperpolarization demonstrates its greatest potential. One of the challenges of hyperpolarized imaging is the need for fast spectroscopy sequences due to the fast relaxation of the hyperpolarized signal. Therefore we developed fast chemical shift imaging techniques that allow for the simultaneous acquisition of both spatial and spectral information (Figure 2).

Figure 3: ypical 13C spectrum of 3.5 mM 1-13C-succinate hyperpolarized at pH=2.9. The chart on the left shows the typical reproducibility achieved; a series of three experiments was conducted within 30 minutes yielding 17.6±1.4% polarization. Natural abundance ethanol with 207mM of 13C per carbon site is used as a reference. Spectra are acquired at 4.7T with a Bruker Avance console and home-built double resonant probe. The image on the right shows a hyperpolarized succinate image of a rat brain. Figure 4:A mixture of 16mM 1-13C-maleate and 8mM 1-13C-succinate was injected into the carotid artery of a 9L tumor- bearing rat. Ex vivo13C high resolution NMR spectra at 11.7T were collected after 1 hour of succinate metabolism from brain and tumor tissues. Glutamine and glutamate C1 and C5 carbons are enriched with 13C label from C1 of succinate in tumors. The order-of-magnitude contrast ratio between tumor and brain suggests that hyperpolarized 1-13Csuccinate could be a highly potent molecular imaging agent.

It is now thus well established that NMR signal is enhanced over 50,000‑fold by the PASADENA and DNP methodologies of creating nuclear spin polarization. Regardless of the particular pulse sequence or detection method the sensitivity is proportional to the fractional polarization P of the target spins, for example, P = 1 x 10-6 for 13C at equilibrium at 1.5T and ambient temperature. It is well known that P for a given nucleus is conserved through chemical reactions, relaxing toward the equilibrium value with a characteristic time T1 of up to several tens of seconds for 13C. Thus, the establishment by any such method of a high value of P allows the corresponding sensitivity enhancement to be transported to any location and chemical species that can be reached on this time scale. This polarization decays with time constant equal to the familiar spin-lattice relaxation time T1 but even after 5T1 (from 1 to 6 minutes for the molecules proposed) the available signal is still more than 2000 times greater than the equilibrium 13C/15N signal. Thus, there is time for the hyperpolarized molecules to be delivered via the blood flow, taken up into extracellular and intracellular volumes, and even metabolized before data acquisition. The equivalent signal-to-noise ratio without hyperpolarization would be achieved with ordinary polarization only after more than 50 days of signal averaging at 1 s-1. Thus the methods in hand are poised to revolutionize chemically-specific in vivo MR by making practical a class of observations both broader than and complementary to existing methods. Changes in concentration in the attomolar to nanomolar regime, occurring in seconds, will be observable for the first time in single shot experiments over volumes of interest in in vivo studies.

Please visit the MRI/MRS webpage for a full listing of products.