A nanocomposite is typically defined as a mixture between a host material (e.g., polymer matrix) and nanofillers with at least one dimension of less than 100 nm. The addition of nanoparticles to a host material very often leads to significant improvements in material properties (e.g., mechanical, electrical, thermal) at relatively small loadings. The utilization of nanocomposites is being increasingly reported in a wide variety of fields including electronics,1,2 sporting goods,3 and aerospace.4,5 Some of the most commonly studied nanomaterials include carbon nanotubes, nanowires, buckyballs, graphene, metal particles, and quantum dots. Nanofillers can be used to transform an insulating material such as a polymer into a highly conductive material through the use of percolation pathways generated by the nanoparticles. Percolation pathways are routes in which a current can pass through the material. The size of the percolation pathway is often dependent upon nanoparticle characteristics such as aspect ratio and their alignment within the host matrix. As a host material, polymer matrices are widely used due to their ease of processability, low cost, and light weight. The addition of nanofillers into a polymer matrix comes with various challenges and difficulties including processing problems, dispersion and alignment complications, longer lead times, and higher overall cost.

The fabrication of nanocomposite structures through additive manufacturing is extremely promising for a myriad of applications such as tissue engineering scaffolds6,7 and liquid8 or strain sensors.9 Additive manufacturing (also referred to as three-dimensional (3D) printing) consists of joining materials to make complicated objects from a 3D computer-aided-design (CAD) model in a layer-by-layer fashion. Extrusion-based 3D printing methods create 3D structures by extruding material from a small diameter nozzle and depositing it onto a printing platform. This technique extrudes the material in a low viscosity state and solidifies post-extrusion. Two extrusion-based methods appropriate to the manufacture of nanocomposite thermoplastics are fused-deposition modeling (FDM)10 and solvent-cast printing.11

FDM uses heat to melt the fabrication material and is a widely used method for the 3D printing of thermoplastics. The addition of nanoparticles to thermoplastic resin is known to increase the material viscosity to the point where clogging can occur more frequently within the nozzle even at high temperatures. Instead of using heat to soften the thermoplastic material, solvent-cast printing uses a solvent to dissolve the material and produce a printable ink solution at room temperature. This ink solution is extruded through a micro nozzle under constant applied pressure; the solution rapidly transitions from liquid-like to a solid-like structure due to fast evaporation of the solvent in air. This steep rigidity gradient makes conventional layer-by-layer printing possible but also provides the additional ability to fabricate freeform self-supporting curved shapes, such as reported by Guo, et al.12 (Figure 1), which is not possible when printing via FDM. This, along with no material degradation due to heat, makes the solvent-cast process very encouraging as a 3D printing method.

Figure 1.Solvent-cast 3D printing of freeform structures. A) Schematic representation of the process.12 The solution is extruded from the syringe barrel through the nozzle. B) Close-up view of rapid solvent evaporation.12 C) Example of freeform structure fabricated from this process.12 D) LED bulb lit up by using 3D-printed freeform spirals made out of PLA and 5 wt% loading of MWCNT using the solvent-cast process.13

Here we present the solvent-cast printing of thin nanocomposite fibers made of thermoplastic poly(lactide) acid (PLA) reinforced with multi-walled carbon nanotubes (MWCNTs). PLA is suitable for this method because it is a widely available, low-cost thermoplastic that is biocompatible and biodegradable with good processability. MWCNTs are nanoparticles with large aspect ratios that exhibit good mechanical,14 electrical,15 and thermal16 properties. The solvent used to create a dilute ink solution of PLA/MWCNT is dichloromethane (DCM), chosen because of its ability to dissolve PLA and its low boiling point (39.6 °C). This article explores the methodology used for 3D printing nanocomposite fibers of PLA/MWCNT using the solvent-cast method. The steps include (1) the nanocomposite ink fabrication, (2) the solvent-cast printing process, and (3) the characterization of the printed fibers. This research shows the strong potential of 3D printing as a novel method for manufacturing nanocomposites with promising applications as reinforced structural parts, flexible electronics, electromagnetic shielding grids, and liquid sensors.

The MWCNTs (Nanocyl NC7000) are dispersed within PLA (PLA 4032D, Natureworks LLC) with a ball mill mixer method (SPEX Sample Prep 8000M Mixer/Mill).17 First, PLA is mixed with the solvent DCM to create a 10 wt% mixture and allowed to mix for 24 h for full dissolution. The PLA/DCM mixture is poured into a ball mill container with the desired amount of MWCNTs. We investigated the loading of MWCNTs of 0, 5, 10, and 20 wt%. The container is placed into the ball mill machine for 15 min to allow for proper dispersion of the nanofillers within the polymer matrix. Afterward, the mixture is left to dry for 24 h. After the solvent fully evaporates, the dry ink mixture is removed from the container and weighed. DCM is added at an amount based on the desired wt% of MWCNTs to this dry nanocomposite to yield a PLA/DCM concentration in the range of 25 to 30%. The mixture is left for 24 h to achieve full dissolution.

The nanocomposite ink is poured into a syringe barrel connected to a micronozzle mounted onto the head of a computer-controlled dispensing robot (I&J2200-4, I&J Fisnar). The extrusion pressure was controlled by a pressure regulator (HP-7X, EFD). The pressure ranged from 200–500 kPa depending on the desired linear flow rate of the ink coming out of the micronozzle, the nozzle size, and the nanocomposite ink concentration (i.e., viscosity of the ink). Continuous cylindrical fibers were extruded at 0 wt% CNT with a 150 μm inner diameter micronozzle, 5 wt% and 10 wt% with 200 μm and 20 wt% with 330 μm tip. The fibers were extruded onto a platform and left to dry for 10 min, then stored in airtight containers before performing subsequent characterization measurements.

We defined the shrinkage ratio as the actual diameter of the fibers over the printing nozzle inner diameter. The fibers printed were cut into six 60-mm long sections for each MWCNT wt% and nozzle tip diameter. The actual diameter of the fibers was measured through digital image analysis taken with an optical microscope (Olympus, BX61). The diameter of each 60 mm fiber is measured at twelve different positions spaced by about 5 mm. An average diameter value for each fiber is calculated.

The conductivity measurements of the printed fibers were performed using a two-point probe method. The applied electrical current varied from 1 to 5 mA using a Kiethley 6221 current source. The volume conductivity was calculated from the resistance values resulting from the two-point probe measurements and by knowing the length and diameter of each fiber. Measurements were done on each combination of MWCNT (0, 5, 10, and 20 wt%) and nozzle diameter (150, 200, 330 μm) at least six times.

Each fiber was mounted in the Insight® MTS electromechanical testing machine equipped with a 1 kN load cell and tested according to the ASTM D3822 standard test method for tensile properties of single textile fibers. Each combination of MWCNT percentage and nozzle diameter was tested at least three times. 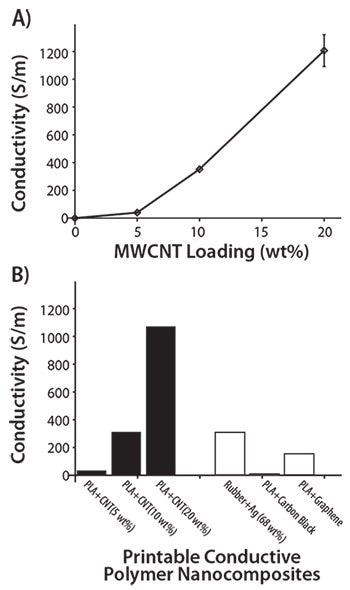 Figure 3 shows the mechanical properties of the nanocomposite fibers along with the shrinking and density measurements. Figure 3A shows the stress-strain curves of the pure PLA and the three MWCNT loadings. The measurements show a much lower strain-at-break when adding MWCNTs. The values change from 0.239 at pure PLA to 0.058 at 5 wt%, 0.046 at 10 wt%, and 0.009 at 20 wt% MWCNT, the largest drop being at 20 wt% with a 96% decrease in the strain-at-break from pure PLA. The tensile strength at pure PLA is 44 MPa; 5 and 10 wt% increases to 58 MPa and 56 MPa (31% and 27% improvement), respectively. The tensile strength at 20 wt% decreases from pure PLA by 28% to 32 MPa. Pure PLA has a ductile behavior with a large elongation at failure. Therefore, it is expected that the addition of MWCNTs would reduce the strain-at-break and make the material more brittle. The increase in tensile strength is also anticipated due to the covalent sp2 bonds formed between the individual carbon atoms, which make carbon nanotubes one of the strongest and stiffest materials ever discovered.21 The decrease in tensile strength for the 20 wt% could be due to the weak van der Waals bonding of PLA-CNT. By increasing the loading of MWCNTs to 20 wt%, the stronger crosslinked bonds within the PLA are replaced by weaker bonds. PLA-CNT bonds are not as entangled, so the whole structure falls apart more easily at lower stress. 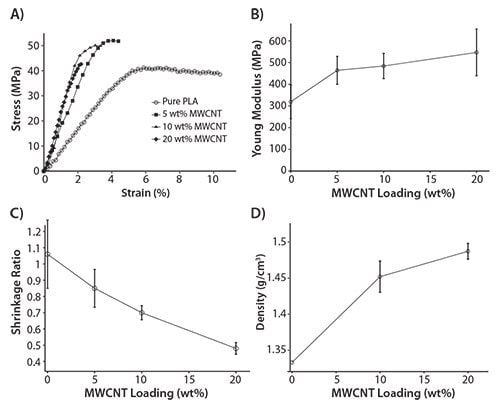 Figure 3B presents the Young’s Modulus for the different printed fibers. The modulus increases from 351 MPa for the pure PLA to 546 MPa for the 20 wt% fiber, corresponding to a 55% increase. It is possible that the extrusion of the ink inside the small nozzle helps the alignment of the nanotubes in the fibers, which would affect the resulting properties of the material.22

Figure 3C displays the shrinkage ratio of PLA/MWCNTs for each MWCNT wt%. The plot clearly shows increasing shrinkage with higher loadings of MWCNT, whereas pure PLA actually increased in size by 6%. Maximum shrinkage occurred at 20 wt% and fiber diameter shrank 52%. The increased shrinkage is most likely related to the amount of DCM in the mixture. More solvent is needed at higher nanofiller concentrations to achieve suitable viscosity for printing. It is necessary to know this shrinkage so that the geometrical changes can be anticipated and correctly planned for the 3D printing of microstructures. Figure 3D shows the density with increasing MWCNT wt%. The density was measured at 0, 10, and 20 wt% of MWCNT and found to be 1.33, 1.452, and 1.48 g/cm3, respectively. Linear interpolation was used to find 5 wt% MWCNT of 1.391 g/cm3. The increasing density is directly related to the higher loadings of MWCNTs. This data will be useful for mechanical modeling purposes of larger structures made out of these 3D printed fibers.

In this work, the solvent-cast 3D printing technique is used to fabricate nanocomposite materials made of PLA and 5, 10, and 20 wt% MWCNTs concentrations. The addition of the nanotubes significantly affects the properties of the host material while preserving a very good solventcast printability. The best improvement was observed for the electrical conductivity where a maximum of 1,206 S/m at 20 wt% MWCNT was measured. To the best of our knowledge, this conductivity is superior to all the current printable commercial polymer-based composite materials. In addition to outstanding electrical properties, the nanocomposite material exhibits better stiffness than the pure PLA. However, the more electrically conductive fibers show a significant decrease of the strain-at-break making the fibers slightly more fragile. The tensile strength increased to 58 MPa for the 5 wt% fiber while it decreased for the 20 wt% MWCNT. The decrease may be attributed to the poor van der Walls bonding between PLA-CNT.

This study shows that it is possible to 3D print highly conductive polymer nanocomposites. While more work is needed to print more complex 3D structures, these materials have the potential to produce finished products in many niche applications. The high conductivity achieved opens the door for on-the-fly 3D-printed electrical components. 3D-printable conductive inks can be further enhanced when combined with other materials for integrated functionality (embedded sensors, EMI shielding, tactile surfaces). This research provides only a small insight into the possibilities enabled by 3D printing. The endless opportunities will only be realized with further work and future collaboration among other fields of science and technology.