Mycotoxins are toxicmetabolites of fungi such asmoulds. Fungal infection of crops can lead to mycotoxin contamination of human food, either directly or through its use as livestock feed.

Some mycotoxins showa particularly high toxicity towards humans, such as the type A Trichothecene mycotoxins T-2 toxin and HT-2 toxin (Figure 1). For these reasons, regulations governing the mycotoxin content of food are crucial to public health. However, such regulations depend on the availability of sufficiently sensitive and accurate analytical methods for the testing of foodstuffs.

Andreas Breidbach1 and Wolfgang Brodacz2,3,4 developed a new GC-MSmethod using fully 13C isotopelabelled analogues of T-2 toxin and HT-2 toxin that allows for the detection of these toxins at concentrations as low as 2–5 ppb. Both the 13C24T-2 and the 13C22HT-2 toxins are now available from Sigma-Aldrich. 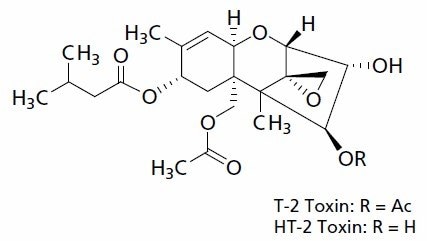 Fully 13C isotope-labelled mycotoxins open the door for isotopic dilution mass spectrometry (IDMS). In this technique, the precision and accuracy of analytical measurements can be significantly increased, and sample handling is simplified. IDMS takes advantage of the fact that the chemical and physical properties of 13C isotope-labelled analogues are nearly identical to those of non-labelled analytes. This means that their behaviour in sample workup is essentially the same, but the labelled and non-labelled analogues can still be distinguished by mass spectrometry (Figure 2). The standard is added right after the sample extraction, thus matrix effects as well as inaccuracies of the following preparation steps are compensated for. 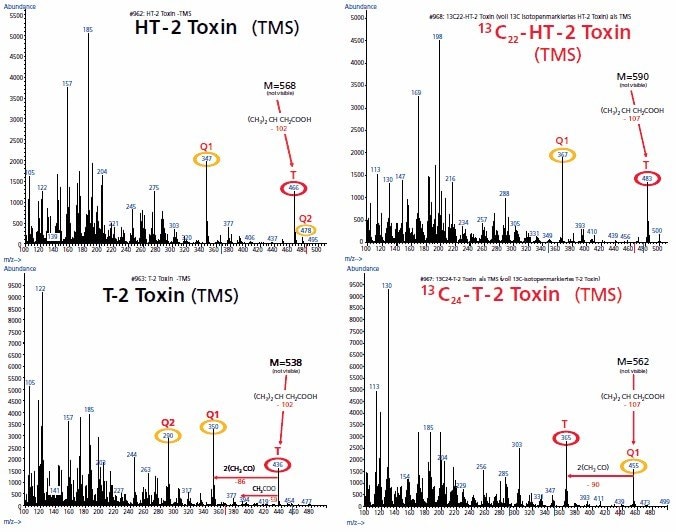 Prior to conventional GC analysis, analytes have to be converted into volatile compounds by silylation. Then the excess of the silylating reagent has to be quenched by water followed by a reextraction of the analyte. However, by using N-methyl-N-(trimethylsilyl) trifluoroacetamide (MSTFA) containing 1%trimethylchlorosilane as a silylating reagent, one can eliminate the water-quenching and the reextraction steps because the relatively low boiling point (131 °C) allows for the use of MSTFA as a solvent for splitless injection GC.

For GC analysis, a robust stationary phase with medium polarity such as a Poly(Diphenyl 35%)/ Dimethylsiloxane 65 %) phase is required to withstand the effects of the silylating agent and heating. A very good separation of T-2 toxin and HT toxin can be achieved with the application of a fast-temperature programme. MS detection with selected-ion-monitoring (SIM) enables detection limits in the range of 2–5 ppb for HT-2 toxin and T-2 toxin, even in complex matrixes. As claimed by EU guideline 96/23/EG, the identities of the toxins were confirmed not only by the retention time but also by the three SIMions. A qualifier was measured for each internal standard to ensure peak purity (Figure 3).

The high price of fully 13C isotope-labelled standards often acts as a deterrent for the use of IDMS. However, the quality of analysis far outweighs the higher price. Furthermore, sample size and quantity of internal standards required can be kept to a minimum with a well-designed method, as quantitative handling after addition of the standard is not critical.

Acknowledgements: This article was developed in cooperation with Wolfgang Brodacz of the Austrian Agency for Health and Food Safety (AGES) in Linz, Austria.