The Novabiochem® brand offers one of the most extensive ranges of high-quality coupling reagents for in situ activation on the market. However, with such a plethora of reagents available, the choice of the optimum coupling reagent for a particular application is not always straightforward. Condensation reagents vary in terms of coupling efficiency, stability, solubility, or reactivity of active species.

In situ activating reagents are widely accepted because they are easy to use, they give fast reactions, even between sterically hindered amino acids, and their use is generally free of side reactions. Most are based on phosphonium or aminium (formerly known as uronium) salts which, in the presence of a tertiary base, can smoothly convert protected amino acids to a variety of activated species (Figure 1). The properties of Novabiochem's coupling reagents are summarized in Table 1. 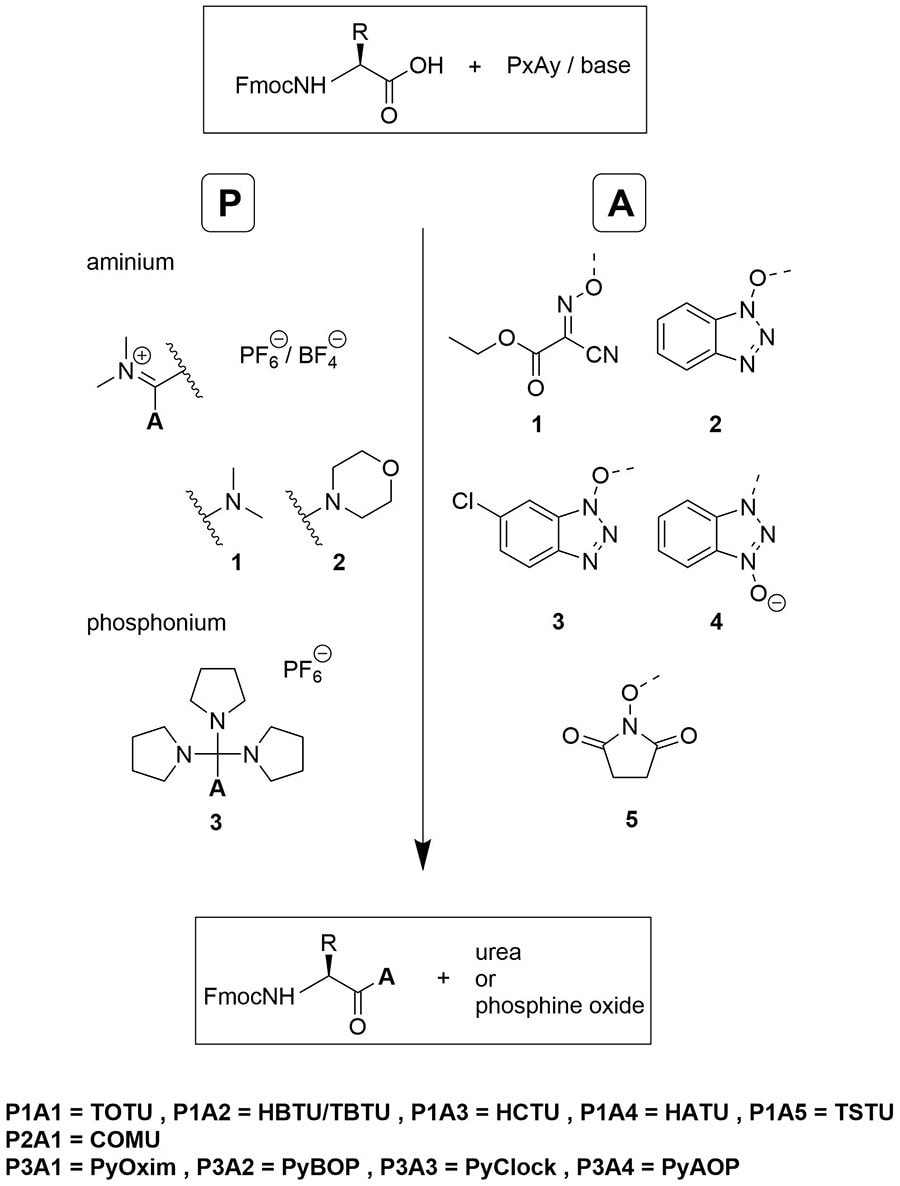 The most commonly employed reagents, BOP, PyBOP, and HBTU generate OBt esters, and these have found wide application in routine SPPS and solution synthesis for difficult couplings. Coupling reagents are also available which generate esters that are more reactive than OBt. The most important are HATU2, PyAOP1,3, and HCTU4, PyClocK, which in the presence of base convert carboxylic acids to the corresponding OAt and O-6-ClBt esters respectively. Such esters are more reactive than their OBt counterparts owing to the lower pKa of HOAt and HO-6-ClBt compared to HOBt. Furthermore, HOAt has the added benefit of the pyridine nitrogen which provides anchiomeric assistance to the coupling reaction, making HATU and PyAOP the most efficient coupling reagent of the OBt series.

Recently, coupling reagents based on the Oxyma Pure leaving group have been introduced, the most useful of which are COMU5,6 and PyOxim7. The evidence on the relative reactivity of the Oxyma esters generated by these reagents is equivocal. The original reports of these Oxyma-based reagents suggest they are more efficient than those based on HOAt, whereas our in-house tests8 indicate the HOAt reagents to be superior. Nevertheless, Oxyma-based reagents always perform better than those based on HOBt (PyBOP, HBTU) and O-6-ClBt (PyClocK and HCTU). One particular advantage of oxyma-based coupling reagents is that they are not based on potentially explosive triazole reagents.

In our experiments, the efficency of a coupling reagent seems to be almost entirely related to the nature of the active ester it generates, with an order of reactivity OAt> Oxyma Pure > 2-ClOBt > OBt. The structure of the uronium or phosphonium component appeared to have little influence.

With the exception of COMU, solutions of uronium-based reagents in DMF are exceptionally stable, making them ideal for use on synthesizers which utilize pre-made solutions of coupling reagents. In contrast, solutions of phosphonium reagents in DMF have moderate stability, and should be kept in closed vials and only used for a maximum of 2 days. However, phosphonium reagents are significantly more soluble in DMF than uronium reagents. This has important practical implications, as it enables reactions to be performed at higher concentrations with concomitant improvements in efficiency.

Phosphonium coupling reagents generally give cleaner reactions than uronium reagents. The latter can cause chain termination by guanidinylating the N-terminal amino group9. This side reaction is particularly problematic when carboxyl activation is slow, for example in the case of fragment and cyclization reactions, or if the excess uronium reagent is used. Formation of such by-products also causes difficulties in the assembly of long peptides as these short positively charged peptides can mask the presence of the target ion in the ESI mass spectrum. In contrast to uronium reagents, phosphonium reagents can be used in excess and can even be used to "feed" a slow cyclization or fragment coupling reaction, to help drive them to completion.