Blue-white screening is a rapid and efficient technique for the identification of recombinant bacteria. It relies on the activity of β-galactosidase, an enzyme occurring in E. coli, which cleaves lactose into glucose and galactose.

The presence of lactose in the surrounding environment triggers the lacZ operon in E. coli. The operon activity results in the production of β-galactoisdase enzyme that metabolizes the lactose. Most plasmid vectors carry a short segment of lacZ gene that contains coding information for the first 146 amino acids of β-galactosisdase. The host E. coli strains used are competent cells containing lacZΔM15 deletion mutation. When the plasmid vector is taken up by such cells, due to α-complementation process, a functional β-galatosidase enzyme is produced.

The plasmid vectors used in cloning are manipulated in such a way that this α-complementation process serves as a marker for recombination. A multiple cloning site (MCS) is present within the lacZ sequence in the plasmid vector. This sequence can be nicked by restriction enzymes to insert the foreign DNA. When a plasmid vector containing foreign DNA is taken up by the host E. coli, the α-complementation does not occur, therefore, a functional β-galactosidase enzyme is not produced. If the foreign DNA is not inserted into the vector or if it is inserted at a location other than MCS, the lacZ gene in the plasmid vector complements the lacZ deletion mutation in the host E. coli producing a functional enzyme.

How Does Blue White Screening Work?

For screening the clones containing recombinant DNA, a chromogenic substrate known as X-gal is added to the agar plate. If β-galactosidase is produced, X-gal is hydrolyzed to form 5-bromo-4-chloro-indoxyl, which spontaneously dimerizes to produce an insoluble blue pigment called 5,5’-dibromo-4,4’-dichloro-indigo. The colonies formed by non-recombinant cells, therefore appear blue in color while the recombinant ones appear white. The desired recombinant colonies can be easily picked and cultured.

Isopropyl β-D-1-thiogalactopyranoside (IPTG) is used along with X-gal for blue-white screening. IPTG is a non-metabolizable analog of galactose that induces the expression of lacZ gene. It should be noted that IPTG is not a substrate for β-galactosidase but only an inducer. For visual screening purposes, chromogenic substrate like X-gal is required.

Figure 1.A schematic representation of a typical plasmid vector that can be used for blue-white screening. 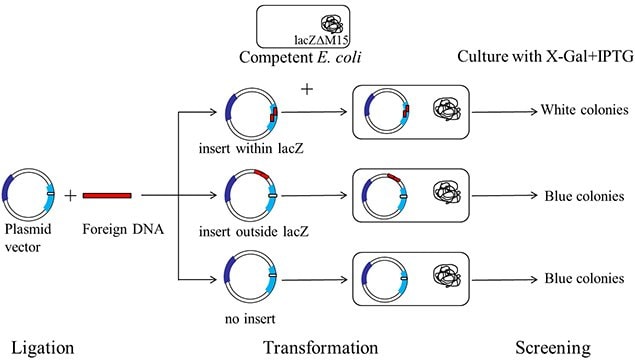 Figure 2.A schematic representation of a typical blue-white screening procedure.

We offer the following ready-to-use expression vectors that can be used for stable as well as transient expression systems. These FLAG-fusion constructs have origins of replication for propagation in both bacterial and mammalian cells.

The following is the reaction setup for ligation

The detailed protocol for transformation using chemical or electrocompetent cells can be found here.

We offer a range of chromogenic substrates that aid screening of recombinant bacteria. Some products may be used to spread on LB agar plates (screening protocol 1), while the others are incorporated into the microbial medium (screening protocol 2). The products are used along with IPTG wherever required. The protocols for both the procedures are given below. 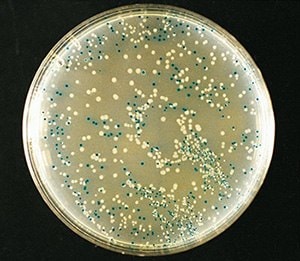