This mini-review highlights recent advances in synthesis and preparation of 2D materials, with emphasis on their relevance
for biosensing applications, followed by a summary of the electrochemical and optical biosensors which are the most
studied 2D materials-based biosensors (Figure 1). In addition, some of the less-explored biosensing technologies of 2D
materials will be discussed. The article concludes with a look into the future of 2D materials as biomedical analytical tools, and
where research is likely to go. 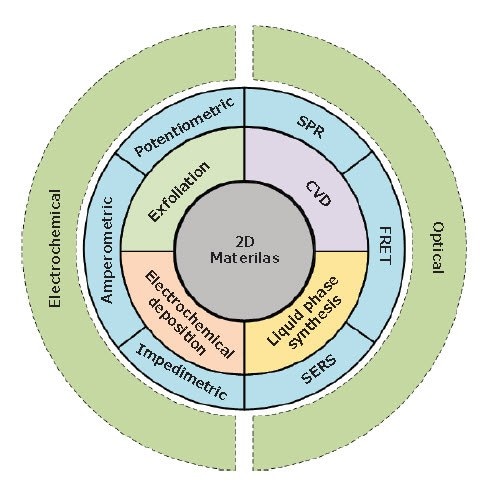 Generally, preparation methods for 2D materials used in biosensors can be divided into mechanical and chemical exfoliation, electrodeposition, chemical-vapor deposition (CVD), and solution-phase synthesis. In this section, we focus on the synthesis of 2D layers (Figure 2) that produce to 2D flakes, powders, inks, and films.

Mechanical exfoliation (or micromechanical cleavage (MC), Figure 2A) is the most-reported method for the preparation of 2D materials from bulk layered structures.1 Although the quality of 2D flakes prepared by MC is superior to those prepared by other techniques, the high dependency on experimental skill and the poor yield limit its practical application for scalable device fabrication. On the other hand, chemical exfoliation (Figure 2B) methods are suitable for the large-scale synthesis of 2D flakes.8 The Li-intercalation and exfoliation method was developed to improve control over flake thickness and exfoliation yield when preparing MoS2 901187, 901867, 808652), TaS2, TiS2 (808717), WS2 (808806), ZrS2, NbSe2 (>808679), WSe2 (808822), Sb2Se3 (401196), Bi2Te3 (733482), and hBN (901349, 901410).8 While chemical exfoliation does exhibit high yields and efficient generation of 2D flakes, modifications of the 2D surface during exfoliation can introduce defects and impurities, and the co-existing single- and multilayered flakes are difficult to separate.

CVD (Figure 2C) is commonly used to synthesize 2D materials with high quality and large areas. For CVD, carbon-based precursors are introduced into a furnace at high temperature, where they react and/or decompose to deposit carbon onto substrates such as Si/SiO2, transition metal catalysts (Cu, Ni), or sapphire, to form single- or multi-layer 2D materials. The quality, size, and thickness of the 2D materials can be tuned by experimental parameters including temperature, pressure, and substrate conditions. For example, graphene on conductive substrates with single or few layers and a centimeter-scale area has been prepared by this method, and transferred to insulator substrates for device fabrication.9 In addition, catalyst-free CVD graphene has been synthesized on sapphire (a dielectric substrate) eliminating the potential for damage by the transfer process and allowing fabrication of devices on directly-grown graphene.10 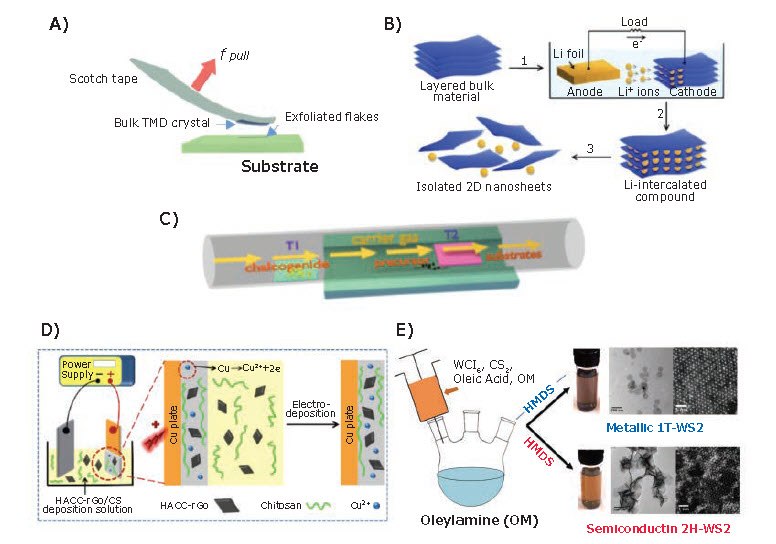 Electrochemical deposition (Figure 2D) is an alternative cost-effective technique for preparing thin films of nanomaterials at low temperatures. The morphology, thickness, and properties of the films can be tuned by adjusting the applied current, voltage, and deposition time. Graphene and rGO films have been electrochemically deposited on various working electrodes for biosensing applications, and some examples are discussed later in this article.11,12 Since such films are prepared from 2D nanosheet dispersions, films with abundant edges can be structured by other nanoparticles to enhance the signal and improve the sensitivity of the sensors.13 However, due to the aqueous surroundings and uncontrollable deposition process, obtaining high quality and reproducibility remains challenging.

Finally, solution phase synthesis (Figure 2E) enables production of gram-scale quantities of 2D materials with precise thickness under relatively mild conditions and low temperatures. It also allows for the functionalization of 2D materials in either aqueous or nonhydrolytic media. Recently, solution-based methods to synthesize graphene,14 TMDs (such as MoS2, MoSe2, WS2 and WSe2)15, and MXenes16 have been developed to prepare thickness- and morphology-controlled, 2D materials with high-yield and scalablility. Moreover, solution phase synthesis methods allow direct preparation of specific phases of 2D materials such as 1T′ MoTe2,17 which can be difficult to access via other methods.

Amperometric (or voltammetric) detection is based on a variety of techniques including cyclic voltammetry (CV), linear sweep voltammetry (LSV), differential pulse voltammetry (DPV), chronoamperometry, among others. Sun et al.18 used a nanocomposite electrode and DPV for the simultaneous detection of dopamine (DA), ascorbic acid (AA), and uric acid (UA) in phosphate buffered saline (PBS). Their sensor was based on a nanocomposite of MoS2 nanosheets (901187, 901867) synthesized by Li intercalation, combined with electrodeposited AuNPs (741949, 752568, 808628) and deposited on a glassy carbon electrode (GCE). The resulting sensor achieved detection limits of 50 µM, 50 nM, and 50 µM and linear ranges of 0.05–100 mM, 0.05–30 µM, and 0.05–40 mM for AA, DA, and UA, respectively. Our group showed that heterostructure of iron-sulfide with graphene enables highly sensitive and selective voltammetry detection of hydrogen peroxide down to ~0.1 nM, over a six orders of concentration range. It was shown that depending on “flavour” of graphene, the response varies significantly (with FeS/CVD graphene heterostructures outperforming FeS/n-type and /p-type epitaxial graphene layers). We specifically showed that oxidative stress induced by heat shock can be monitored in situ in E. coli cells.25 For amperometric glucose detection, Rakhi et al.19 combined MXene Ti3C2Tx nanosheets with AuNPs to form a nanocomposite, with immobilized glucose oxidase enzyme (GOx) and coated with Nafion (Cat. No. 70160). The sensor was able to detect at little as 5.9 µM of glucose in PBS (pH = 7) with a linear range of 0.1–18 mM (Figure 3A). The clinical values for blood glucose concentration (~5 mM) fall within this range, making it a viable sensor for real-world applications. The sensor maintained 93% of its response (at 3 mM) after 2 months of storage, demonstrating robustness and long-term stability.

Potentiometric biosensors are primarily FET-based sensors, which have attracted attention for detection of various analytes. A solution-gated potentiometric sensor for detection of glucose in PBS was developed by Zhang et al.,20 using CVDgrown graphene (900415, 900443, 900445, 773719> and 773700) for both the gate and channel. The gate electrode was modified with PtNPs ( 685453,771937) and GOx, which catalyzed glucose oxidation, resulting in the production of H2O2. The H2O2 was then oxidized, effectively altering the gate voltage. This was indirectly used to determine the glucose concentration (Figure 3B) with a glucose detection limit of 500 nM, which is low enough for noninvasive detection in samples like saliva and sweat. Impedimetric sensors rely on changes to either the Faradaic or non-Faradaic impedance in the presence or absence of a target analyte. For the Faradaic detection of Salmonella, Jia et al.21 developed a composite of rGO/MWCNTs, electrodeposited onto a GCE. Once the electrode was prepared, they drop-cast an amino-modified Salmonella aptamer onto the electrode. Based on the change in charge-transfer resistance, they were able to detect as few as 25 colony forming units (cfu) per ml, with a linear range of 75–7.5 105 cfu/ml, in 60 minutes without any pretreatment (Figure 3C). For typhoid fever-causing Salmonella, the infective dose can be as low as 1,000 cells, making this sensor potentially applicable in clinical settings.26 Figure 3.Examples of electrochemical sensors utilizing amperometric, potentiometric, and impedimetric transduction mechanisms. A) The addition of glucose oxidase (GOx) enhances the peak current response to glucose for the MXene/AuNP/Nafion/GOx composite developed by Rakhi et al.19 The inset shows an SEM image of the MXene layers coated with AuNPs (scale bar = 2 µm). B) A potentiometric sensor utilizing graphene for both the gate and channel material for the indirect detection of glucose. GOx and PtNPs modify the gate electrode, resulting in generation of H2O2 upon reaction with glucose. H2O2 is oxidized resulting in an effective change in gate potential, which is used to determine glucose concentration.20 C) For the Faradaic impedimetric detection of Salmonella, Jia et al. used an aptamer-modified rGO/MWCNT composite on a GCE. The diameter of the semicircle of the Nyquist plot (-Zim vs Zre) qualitatively indicates the charge-transfer resistance, as seen in the equivalent circuit model. Reproduced with permission from references 19 and 20, copyright 2016 and 2015, respectively, Nature Publishing Group.

In addition to tunable electronic and electrochemical properties, 2D materials possess unique optical and vibrational properties, including photoluminescence, fluorescence quenching, second harmonic generation, and enhanced electron-photon interaction, which make them ideal for use in optical sensors.22-24 Common optical sensing techniques include Forster resonance energy transfer (FRET),22 surface plasmon resonance (SPR),23 and surface-enhanced Raman spectroscopy (SERS).24 Sensors based on fluorescence quenching or enhancement, such as FRET, detect changes in fluorescence in the presence/ absence of a target analyte. Kong et al. fabricated a sensor for the detection of prostate specific antigen (PSA), an important marker of prostate cancer.22 Their sensor utilized Li-intercalated MoS2 nanosheets with a fluorescent modified single-stranded (ss) DNA probe adsorbed onto the surface (Figure 4A). In the absence of PSA, the fluorescence was strongly quenched, but upon the addition of PSA, the fluorescence returned. They reported a dynamic response range of 0.5–300 ng/ml, with a linear range from 0.5–60 ng/ml. The limit of detection was 0.2 ng/ml, and the technique was selective in the presence of other common interfering proteins, including carcinoembryonic antigen (CEA). Since PSA values of 4 ng/ml or higher can be indicative of prostate cancer, this has obvious practical implications.

SPR sensors detect changes in the local refractive index in the presence or absence of a target analyte. Surface plasmons are highly sensitive to these changes. 2D materials are used to enhance the sensitivity of SPR sensors, because they integrate very well in these sensors due to their thin film nature. Figure 4.A) The addition of more MoS2 nanosheets (0-40 µg/ml) for a given concentration of PSA aptamer (PA) (50 nM) quenches the fluorescence intensity. The fluorescence is restored upon increasing the concentration of PSA (0-300 ng/ml shown here). Reproduced with permission from reference 22, copyright 2015 Springer. B) The experimental setup of an SPR measurement used by Kamaruddin et al. Their chitosan-GO composite was used for the detection of Hg2+ and Pb2+ ions. Reprinted with permission from reference 23, under MDPI open access policy. C) AuNPs@WS2 nanosheets serve as the substrate for modification with an aptamer for the SERS-based detection of myoglobin (Mb). Changes in the Raman peak intensity can be used to determine the Mb concentration. Reproduced with permission from reference 24, copyright 2018 Springer.

In addition to fluorescence-based and SPR methods, SERS detects minute changes in the Raman scattering due to adsorption of analytes to the surface. For the detection of myoglobin (Mb, M0630, M5696), Shorie et al.24 fabricated a SERS-based sensor that combined liquid-exfoliated WS2 nanosheets with AuNPs (Figure 4C). Elevated Mb levels are indicative of muscle damage, and can be used for early detection of heart attacks. In this sensor, an anti-Mb aptamer was deposited onto the surface for selective detection of Mb, and was able to detect as little as 10-2 pg/ml, well below the blood level values (~85 ng/ml) that can indicate a heart attack or other muscle damage. The enhancement factor due to the WS2/AuNPs was 6.78 x 106 .

This article has summarized recent advances in synthesis of 2D materials, with a focus on their application in biosensing technologies. The advantages and disadvantages of various methods used to synthesize 2D materials as biosensing platforms have been discussed. Due to the unique properties of 2D materials, novel electrochemical and optical biosensors can detect neurotransmitters, metabolites, proteins, nucleic acids, bacterial cells, and heavy metals.

Considering the enhanced sensitivity offered by 2D materials, their atomically thin nature, and the advanced functionalization capabilities, this class of materials can open new avenues in healthcare, especially in point-of-care diagnostics and flexible and/or transient bioelectronics. However, in order to take advantage of their full capabilities, further technological development and better understanding of their properties are required. First, synthesis methods for developing environmentally stable 2D materials and heterostructures at lower cost and higher material/morphological control will make them more compatible with biosensing applications, especially for flexible platforms. Second, controlling of the layer number, defect chemistry, and material phase needs to be established, because the sensing performance of 2D materials is affected by these parameters. Third, control functionalization of the 2D material surface, which has a significant impact on the optical/ electronic/vibrational properties, has not been well-explored, and is an emerging research area for the community. Finally, biocompatibility and/or antibacterial properties of different 2D materials (beyond graphene, GO, rGO, and MoS2 ) and how synthesis process affect them need to be systematically investigated.