There is a confirmed link between consumption of foods that contain trans fatty acids and LDL or so-called bad cholesterol levels. High LDL levels are associated with increased risk of coronary heart disease, the leading cause of death in the US and a growing concern in other parts of the world. Trans fatty acids, also known as trans fat, are made by hydrogenation of liquid oils which solidifies the oils and increases the shelf life and flavor stability of the oils and foods that contain them, including vegetable oils, crackers, candies, baked goods, cookies, snack foods, fried foods, salad dressings and many other processed foods. The US Food and Drug Administration (FDA) recently amended its regulations on nutritional labeling to require that the amount of trans fatty acids in a food be included in the Nutrition Facts panel. (See US FDA 21 CFR Part 101, Sec. 101.62 “Nutrient content claims for fat, fatty acid, and cholesterol content of foods.”) Because of their impact on health, the measurement of trans fatty acid levels requires a reliable analytical method.

Whereas the fatty acid trans isomers have adverse health affects, the cis isomers typically do not. Therefore it important to be able to resolve positional cis-trans isomers in food samples to ensure the food conforms to label requirements. Capillary GC is by far the most common analytical tool to measure fatty acids in food and other matrices. (The fatty acids are first derivatized to the corresponding methyl esters (FAME) to improve their volatility prior to GC analysis.) Capillary GC columns provide the necessary selectivity to resolve cis-trans pairs and can provide rapid analysis, which is important since more samples are continually analyzed on a day-to-day basis.

For analysts employing capillary GC for FAME analysis, two critical aspects of the method need to be optimized:

To address these issues we evaluated approaches to decreasing the analysis times of trans FAMEs while using selective capillary columns to provide the desired sample resolution.

Reducing the run time of a GC separation can be achieved by the use of shorter capillary columns, decreased column internal diameter, thinner stationary phase films, H2 carrier gas, higher carrier gas velocities, optimized α values, selective detectors, faster oven temperature programming rates and combinations of the parameters in this list. However, one must be careful to understand the impact of these changes on the resolution of the method.

Separation of FAMEs by carbon chain length and degree of unsaturation

Polar Omegawax and SUPELCOWAX (polyethylene glycol) capillary columns are the choice for resolving FAME isomers according to carbon chain length and degree of unsaturation, with minimal carbon chain length overlap. Figure 1 demonstrates the fast GC analysis of a 37-component FAME mix on this polar column. The analysis time is about 5 minutes. The elution order within a carbon chain length is: saturated, monoene, diene, triene, etc. Minimal resolution of the cis and trans isomers is achieved on this column as shown by the resolution of methyl eladate (peak 17) from methyloleate (peak 18) and methyllinolelaidic (peak 19) from methyllinoleate (peak 20). In both cases, the cis isomer elutes prior to the trans isomer.

Highly polar cyanosilicone based capillary columns are needed to provide cis and trans FAME isomer resolution. Standard cyanosilicones such as SP-2330, SP-2340, and SP-2380 provide group cis and trans isomer resolution, where the trans isomers typically elute first as a group followed by the cis isomer group. Figure 2 demonstrates the fast GC analysis of a 37-component FAME mixture on an SP-2380 0.10 mm I.D. column. C18:1cis and trans FAMEs are included in the sample. Note the improved resolution of the cis and trans pairs (peaks 17/18 and 19/20) compared to the previous SUPELCOWAX 10 column separations.

In developing a fast GC alternative to this long (100m) column, we investigated decreasing the column internal diameter in order to provide similar resolution in a faster analysis time. Figure 4 demonstrates the analysis on 30m and 35m x 0.10 mm I.D. x 0.08 μM df SP-2560 columns. As shown, these columns do not provide the resolution demonstrated on the 100m column. The 0.10 mm I.D. columns have limited sample capacity, resulting in the columns being easily overloaded. We also investigated various temperature program rates (Figure 4) to try and improve the resolution. Some improvements were noted, but results comparable to the 100m columns were not achieved. 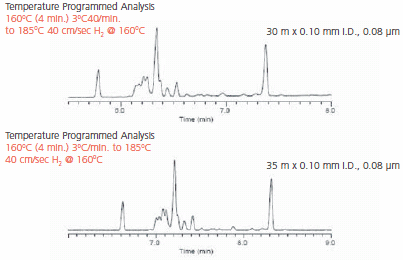 Since the 0.10 mm I.D columns did not provide the necessary resolution and decreased analysis time, we focused our attention on 0.18 mm I.D. columns. Theoretical calculations predict that a 75m x 0.18 mm I.D. x 0.14 μM SP-2560 should provide similar resolution to the 100m x 0.25 mm I.D. column. Figure 5 shows the results of this analysis.