Monoclonal antibodies (mAbs) are widely manufactured by many biopharmaceutical companies to treat a myriad of diseases ranging from Alzheimer’s disease, Parkinson’s disease, ulcerative colitis, and many types of cancers. Most recombinant therapeutic mAbs belong to the human immunoglobulin G (IgG) category among the immunoglobulin superfamily. A schematic of an IgG antibody is depicted in Figure 1.

A general IgG antibody is composed of two light chains (LC) that are tethered to two heavy chains (HC) through disulfide bonds. In addition, due to the fact that the LC and HC are composed of amino acids with reactive side chains, IgG’s can be post-translationally modified through phosphorylation, methylation, oxidation, and nitrosylation, among other modifications.

These modifications may change the binding affinity of the mAb so that it binds either the wrong antigen, does not bind any antigen, or associates with the wrong cell surface receptor. Biopharmaceutical companies need to develop rigorous methods to assess lot-to-lot reproducibility of their candidate biologic drug, and the above mentioned modifications are known as Critical Quality Attributes (CQAs) that both the Food and Drug Administration (FDA) and the European Medicines Agency (EMA) monitor. Due to these stringent requirements from regulatory bodies, much research has been pursued in the past 20 years to develop accurate, robust, and high-throughput methods to assess biopharmaceutical purity and structure. Figure 1.Graphical depiction of a human IgG1 antibody. Note the structural complexity of the different domains of the antibody.1

Besides advances in UHPLC instrumentation, there have been many advances in the field of HPLC column and stationary phase development. Two main types of particle morphology are prevalent in the industry today: fully porous particles (FPPs) and superficially porous particles (SPPs, also called core-shell or Fused-CoreTM particles). To take advantage of the low dispersion of UHPLC instrumentation, columns with sub-2 μm FPPs with pore sizes of 300 Å have been used to accommodate for the larger hydrodynamic radii of biomacromolecules. These columns have been the industry standard since the mid 2000’s. However, these columns suffer limitations when analyzing larger or more complex proteins like mAbs and antibody-drug conjugates (ADCs). The relatively small pore size, in addition to a totally porous architecture, restricts the free diffusion of large molecules through the particle. This architecture concomitantly results in an increase in the mass transfer term of the van Deemter equation, leading to peak tailing, loss of resolution, and low recovery.

In recent years, the use of columns packed with SPPs has been in vogue, especially in the area of biologic characterization. Historically, Horvath and Kirkland pioneered the concept and initial synthetic techniques for producing SPPs in the late 1960’s to early 1970’s.2, 3 The past 40 years have seen a resurrection and renaissance of these particles’ use in UHPLC, and now, advanced versions of these particles are available for several different application areas. These applications include small molecule pharmaceutical separations, pesticide analysis, glycan analysis, chiral separations, and large molecule separations. Figure 2 shows a scanning electron microscopy (SEM) image of an SPP. Note the presence of the solid silica core in the SPP.

The current BIOshell™ line of columns utilizes SPP technology to provide an alternative to sub-2 µm FPPs for biomolecule separations. Recently, a new addition to the BIOshell™ line of columns has been introduced: the BIOshell™ IgG 1000 Å C4 column. This column is packed with 2.7 μm SPPs that are composed of a 0.5 μm shell thickness and a 1.7 μm solid silica core. The particle is also composed of 1000 Å pores, permitting the unrestricted analysis of mAbs, ADCs, and other, much larger, biomacromolecules. Advantages over columns packed with FPPs are numerous: the SPP shows significant advantage in mass transfer, leading to less band spreading; columns packed with SPPs are more uniformly packed than columns composed of FPPs, leading to a lower Eddy dispersion (A term) in the van Deemter equation; and larger particle sized SPPs have efficiencies similar to or better than sub-2 μm FPPs, leading to the ability of the analyst to run at higher flow rates with less risk of on-column frictional heating due to elevated column backpressure. The remainder of this article will highlight, in more detail, advantages of the BIOshell™ IgG 1000 Å C4 column as compared to commercial FPP columns for large molecule separations.

As noted in the previous paragraph, the efficiency gain observed when comparing SPP and FPP particle architecture is due mostly to the short diffusion path within the SPP architecture, thus enhancing mass transfer. In addition, the BIOshell™ IgG column has 1000 Å pores, therefore minimizing any secondary size-exclusion effects that could lead to band broadening and loss of resolution. These concepts are illustrated in Figure 3 in which the SigmaMAb monoclonal antibody standard is assayed on three columns: BIOshell™ IgG 1000 Å C4, BIOshell™ A400 Protein C4, and a 1.7 μm, 300 Å FPP packed column. Note the lower peak width, at half height, of the main antibody peak as well as improved resolution of minor variants surrounding the main antibody peak, observed on the BIOshell™ IgG column. 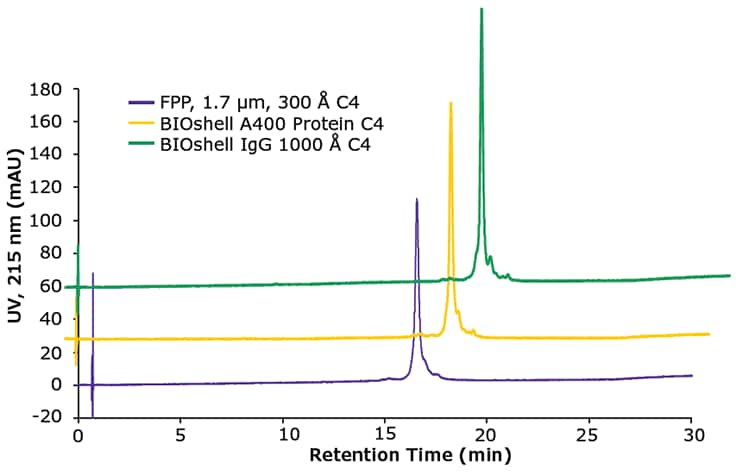 Figure 3.Comparisons of chromatographic results of the analysis of SigmaMAb, a recombinant IgG1 antibody standard.

In order to ensure that this trend observed in Figure 3 was translatable to any mAb, a series of mAbs was assayed on the same columns, using the same chromatographic method, and the peak width at half height, a measure of efficiency, was compared. Figure 4 summarizes those results. None of the mAbs assayed generated peak widths, at half height, greater than 0.23 min on the BIOshell™ IgG 1000 Å C4 column whereas this value was consistently higher on the other two columns. 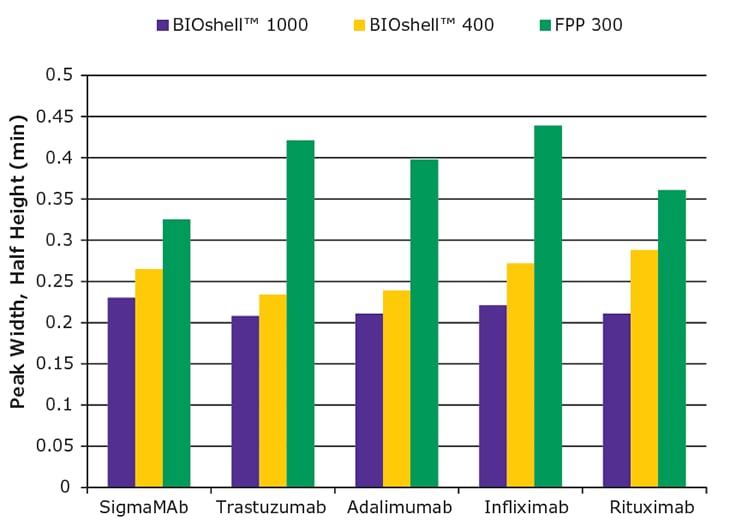 Figure 4.Comparison of peak widths, at half height, for a series of five monoclonal antibodies. 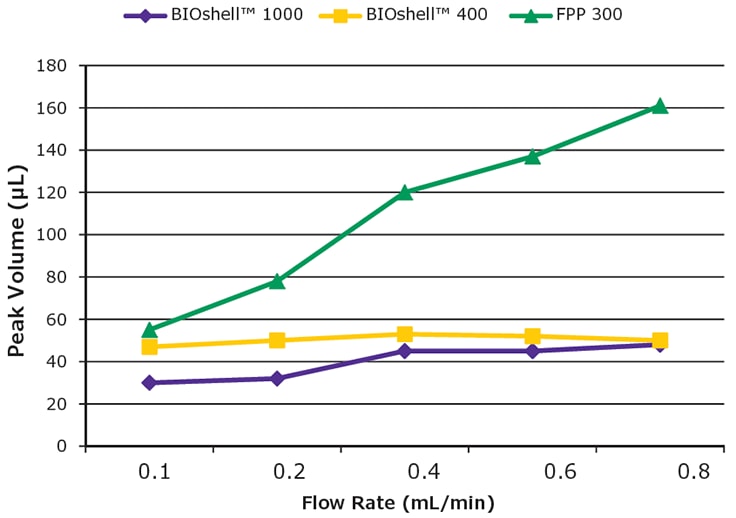 Figure 5.SigmaMAb peak volume versus flow rate. Note how the two columns packed with SPPs have shallow slopes compared to the FPP column. Conditions were the same as outlined in Figure 3, except in each case, gradient volume was held at 10 mL. Peak volume was calculated as peak width at half height multiplied by flow rate.

Figure 6.Major disulfide isoforms of IgG2 antibodies. The inset in the yellow square shows the amino acid numbers of the cysteines in the hinge region. The “S” with the red line connecting it denotes cysteines active in disulfide bond scrambling. Adapted from Reference 4.

One method to gauge the efficiency of a column operating at high flow rates is to examine the peak volume of an analyte at varying flow rates. For SPPs, the mass transfer term of the van Deemter equation is relatively unaffected by flow rate. Thus, theoretically, peak volume should show relatively little change with increasing flow rate but should change (i.e., increase) for analytes assayed with FPP-packed columns. Using SigmaMAb as the analytical probe, this investigation was conducted using the BIOshell™ IgG 1000 Å C4 column, BIOshell™ A400 Protein C4, and the FPP, C4 column used previously. Figure 5 summarizes the results. The two BIOshell™ columns, as expected, show little change in peak volume with increasing flow rate while the FPP 300 column shows a steep increase due to the effect on the C term in the van Deemter equation.

Because of their reduced effector function activity, IgG2 antibodies are becoming the favored format for some protein therapeutics. All IgG2 biologics, however, are composed of different ratios of IgG2 isoforms that only differ by the pattern of disulfide bonding in the hinge region. Figure 6 displays some of the possible isoforms of an IgG2 antibody.4

Because some of these isoforms may have immunogenic effects on a patient, and to ensure lot-to-lot reproducibility of a biologic, a method is required to resolve these different variants. Recently, an analytical reversed-phase chromatography (RPC) method was developed to resolve these different variants on the BIOshell™ IgG 1000 Å C4 column. Figure 7 compares the chromatographic results of using a column packed with FPP versus using the BIOshell™ IgG column in resolving different disulfide bond isoforms of denosumab. Notice the drastically improved resolution of disulfide bond isoforms using the BIOshell™ IgG column over the column packed with FPPs. Using this RPC method with the BIOshell™ IgG column, in combination with techniques such as redox amplification, thiol tagging, and mass spectrometry, it would be possible to identify and confirm the peaks in Figure 7. Figure 7.Analysis of denosumab, an IgG2 antibody, by RPC.

As the market for new drugs is slowly overtaken by biologics, the challenges in determining the purity of a new drug will be daunting. New column technology, like the BIOshell™ IgG 1000 Å C4 column, will help scientists develop new methodologies to resolve these challenges. The BIOshell™ IgG column, incorporating SPPs, allows for high speed, high efficiency separations without a drastic increase in backpressure. As regulatory agencies require biopharmaceutical companies to add more CQAs in the monitoring of new drugs, the BIOshell™ IgG column can provide a valuable addition to the analyst’s tool box.