Bio-Inspired “Green” Synthesis of Nanomaterials and their Applications

Silica is a very popular inorganic nanomaterial used in a wide range of applications including fillers for rubber, catalyst supports, separation media, carriers in food and agriculture, and abrasive/anticaking agents in cosmetics. It is also widely believed to be an important material for biomedical applications for following reasons:

This article provides an introduction to the various types, chemistry, and traditional syntheses of silica, followed by an overview of the synthesis, properties, and applications of bio-inspired silica, including a perspective on potential applications.

Although the term “silica” may suggest a single material type, in reality, the term represents a vast number of materials with distinct structures and properties. This includes silicas that are crystalline (minerals), amorphous, porous (both structured and unstructured pores), colloidal, as well as in a gel or other forms.5 However, each material type is differentiated in a number of ways, including through the position of the silicon and oxygen atoms, the sizes of the primary particle, secondary particles and aggregates, porosities, level of condensation/hydration (i.e., presence of silanol groups: Si–OH), and surface chemistry (e.g., distribution of surface silanols and surface charge). These seemingly subtle differences mainly arise from the method of synthesis, precursor chemistry, catalyst, solvent, finishing method (e.g., drying), and storage and can manifest themselves in significant ways.

A wide range of approaches have been developed for the preparation of silica nanomaterials, including mechanical methods (e.g., ball milling and attrition), physical techniques (e.g., sonochemical, sputtering, and microwave-assisted), chemical routes (vapor phase synthesis, precipitation, micelles, solvothermal, and sol-gel), and combinations thereof.6 In the past, we have witnessed three revolutionary technologies for the synthesis of silica, including the invention of “Stober” synthesis for monodisperse nanoparticles (in 1968),7 as well as two methods for the synthesis of mesoporous silica, including MCM-41 (in 1992),8 and SBA- 15 (in 1998).9 The Stober route enabled the synthesis of monodisperse nanoparticles of controlled sizes, typically between 10–500 nm. Mesoporous silica synthesis, on the other hand, allowed access to porous materials with well-defined and tunable pores that has opened up a number of diverse applications. Collectively, these three papers received more than 22,000 citations, confirming their widespread impact. Mesoporous silicas (e.g., MCM-41 and SBA-15), colloidal Stober silicas, and silica gels prepared via sol-gel methods are most relevant to biomedical applications, including toxicity research. Mesoporous silicas, in particular, have been of wide interest due to their high internal surface areas, large pore volumes, and unique customizable mesoporous structure.1-2 However, the process of mesoporous silica synthesis is typically complex, multistep, and energy intensive, involving harsh conditions including extremes of pH, high temperatures, and the use of highly toxic silica precursors.

Biology exerts a remarkable level of control over fabrication of more than 60 distinct nanomaterials such as CaCO3 (481807), Fe3O4 (518158), and silica produced under environmentally friendly conditions.10 Biology has identified a number of “clever” green routes to produce nanomaterials, and an understanding of the secrets of biological nanomaterials formation has the potential to lead to materials with novel applications and/or new technologies for nanomaterials production. The biological production of sophisticated nanomaterials encompasses most of the twelve principles of green chemistry and leads to exciting prospects.11

Biogenic silica is highly sophisticated, hierarchically organized, and produced in a controlled fashion by microorganisms, animals, and plants formed under environmentally friendly and all-aqueous (“green”) conditions in ambient temperatures and pH. Biological and biochemical investigations have made substantial progress in understanding the mechanisms of biosilica formation (Figure 1). This process involves various specialized organic molecules such as proteins and enzymes that regulate the chemistry of silica formation in vivo.11a For example, amines and amine-functionalized proteins have been identified, isolated, and characterized from silica forming microalga, while a family of specialized silicatein proteins have been discovered from a range of silica forming sponges.11a

In order to further investigate molecular interactions between silica and biomolecules isolated from biosilica forming systems, a number of in vitro studies have been undertaken. These investigations involve the use of advanced analytical tools, the use of model systems as well as modelling and simulations (Figure 1). Such in vitro experiments have produced a great deal of information on biosilicification, in addition to developing greener methods for the synthesis of tailorable silicas that are suitable for novel applications.c 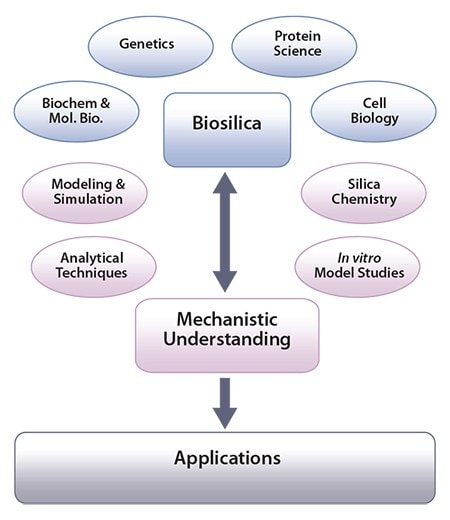 Figure 1. Scheme showing how the study of biosilica formation can lead to mechanistic understanding and generate applications. Image adapted from Patwardhan, Chem. Commun. 2011.

During the last ten years, we have seen an exponential growth in research publications that cover biological and biologically inspired silica.11a For example, researchers have unveiled mechanistic secrets of biosilica formation and how certain biomolecules play a crucial role in nanomaterial deposition through their chemistry and architecture. In vitro experiments on silica formation have enabled the development of bio-inspired green routes to silica by utilizing a wide variety of “additives” (analogues of biomolecules).13 These additives include a range of small to polymeric amines, polypeptides, proteins, and enzymes (selected examples are shown in Figure 2, an extensive list can be found in reference 11a). Furthermore, bio-inspired silica synthesis has been shown to be compatible with a wide variety of silica precursors (Figure 3) with unique features.14 As the understanding of the molecular interactions between additives and nanomaterials are becoming more clear, increased control over the green synthesis of nanomaterials and their properties will become possible. For example, we have demonstrated the ability to tune particle size from <100 nm to 400 nm, surface area between 10–600 m2/g, as well as produce tailored morphologies (Figure 4).15 Various other advantages of the bio-inspired synthesis have been summarized in Table 2. 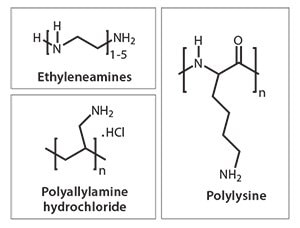 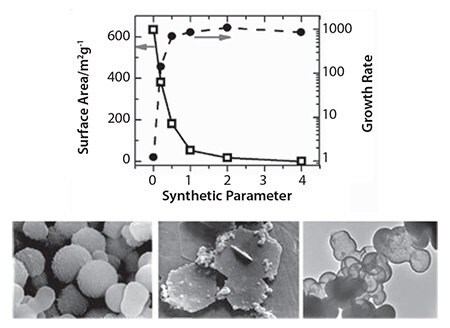 Table 1.Comparison of traditional methods with bio-inspired synthesis.
Table 2.Summary of properties that can be controlled in bio-inspired silica synthesis. Table adapted from Reference 11a.

Bio-inspired routes for catalysis offer significant potential. Key advantages of this approach include mild processing conditions, facile, rapid and one-step procedures, and the potential to achieve high enzymatic activity and stability. This is a “doubly” green approach, since enzymatic processes are known to provide greener alternatives, while green immobilization methods eliminate further waste and pollution. A wide range of enzymes have been successfully immobilized on bio-inspired silica, including catalase, peroxidases, oxidases, lipases, and many others.16

The success of biocatalysis was demonstrated using lipase as a commonly used model of an industrially important enzyme.12 Here, very high levels of lipase immobilization efficiencies (close to 100%) were reported. It was revealed that the enzyme retained its full activity; any apparent reduction in activity was due to mass transfer limitations and not enzyme deactivation. An important feature of bio-inspired synthesis, as illustrated in Figure 4, is the ability to tailor physical properties. This control over physical properties can be exploited to modulate biocatalyst performance. The enzymes immobilized using bio-inspired synthesis generally exhibit excellent reuse potential, very low levels of leaching, improved chemical and thermal stabilities, and sustained performance in continuous reactor operations. These properties enable their commercial utilization and, in particular, open up applications in the food and pharmaceuticals sectors.

The mild processing and biocompatibility of silica has led scientists to explore the ability of bio-inspired silica as a delivery vehicle for carrying cargo such as fluorescent dyes and drug molecules.11a Although this is an emerging sector for applications of bio-inspired silica, one example stands out. Sano et al. reported the loading and successful release of an anticancer drug using bio-inspired silica.17 It was postulated that drug release occurs via hydrolysis and disintegration of silica in aqueous solutions; thus, slowly releasing the anticancer protein resulting in cancer cell death. The ability to control the chemical properties such as degree of hydration will prove important in the future exploitation of silica for use in drug delivery systems.

Bio-inspired silica is typically micro- and mesoporous, and its porosity can be tuned by careful control of synthetic conditions. These properties have been exploited in selective adsorption and removal of pollutants from air, and by extension, from water as well. For example, the extraction of formaldehyde from contaminated air streams has been reported using bio-inspired silicas. The method exploits the selective chemisorption of formaldehyde by silicas.18 The performance of this approach can easily rival existing sorbent technologies. When considering the synthesis cost and time, as well as green implications when preparing silica materials, it is clear that bio-inspired silicas have the potential to provide an exciting new platform for adsorption and environmental remediation of volatile organic compounds.

Detailed evaluation of the economic feasibility of this design and a comparison with existing industrial silica production processes were also conducted. This feasibility work presented a promising plant design for large-scale manufacturing of bio-inspired silica. This process would be significantly economical compared to current production; the payback period is reduced to 25% of that of the traditional process. Hence, the bioinspired process shows great promise for industrial-scale development. Furthermore, the green process was estimated to reduce the manufacturing carbon footprint by over 90%, mainly by reduced energy requirements. These benefits, in addition to the potential for improved control of nanomaterial properties using bio-inspired processes, promises a very interesting future for the development of bio-inspired silica.