Colloidal quantum dots (QDs) are solution-processable luminescent materials that can produce high-quality color in light emitting diodes (LEDs). These LEDs are essential components of advanced solid-state lighting and flat panel displays.1 After more than 30 years of development, CdSe and InP based QDs are now emerging as “upstarts” in commercial liquid crystal display (LCD) TVs from TCL (XESS X1) and Samsung (SUHD), as well as prototype EL display demos from BOE (SID 2017). However, large-scale commercialization is still limited by high cost and limited reliability. This performance gap has helped to generate intense interest in finding new approaches. QD-LEDs are based on either a down conversion photoluminescence (PL) mechanism or on an electricity-light conversion electroluminescence (EL) mechanism.2,3 QDs (or nanocrystals) comprised of halide perovskites (ABX3, where A = Cs+ or CH3NH3+ (methyl ammonium; MA) or CH2(NH2)2+ (formamidinium; FA) and X = Br, Cl or I) QDs or nanocrystals show outstanding characteristics including superior PL properties, low fabrication cost, and enhanced color performance.4-6 These features make them promising candidates as light emitters for display technology.7-10

As illustrated in Figure 1, the development of perovskite QDs dates back to the discovery of enhanced PL emissions in nanosized perovskite embedded in meso-Al2O3 in 2012.11 Publications on this topic have shown exponential growth after highly luminescent colloidal perovskite QDs were first reported in 2015.9,10,12 In the past three years, significant progress has been made in the fabrication of perovskite QDs as new strategies have been developed to fabricate high-quality materials, enabling rapid light emitting device development. Even when compared to well-developed CdSe and InP QDs, prototype color conversion LEDs based on perovskite QDs show superior color performance and improved luminous efficiency (120% NTSC, 109 lm/W), enabling enhanced LCD panels (Figure 2A).13 Meanwhile, the performance of perovskite QD-based EL devices now approaches that of other conventional QDs, even showing promise for use in flexible displays (Figure 2B).14 The controllable fabrication of high quality perovskite QDs is a prerequisite for application exploration. In this mini-review, we will highlight some of the most highly-developed synthetic techniques for perovskite QDs, as well as provide a brief summary of the recent progress toward display applications. 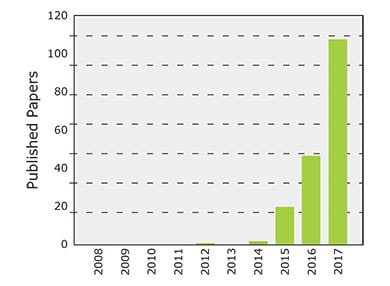 The hot injection technique was the first method introduced for the colloidal synthesis of CdSe QDs, and it has since been widely applied to a variety of colloidal nanoparticles.15,16 By adapting this technique, colloidal perovskite nanocrystals can be fabricated in a supersaturated solution through fast injection of the precursors at an elevated temperature.9,17-19 In 2014, Schmidt et al. first reported the preparation of colloidal CH3NH3PbBr3 nanoparticles by mixing CH3(CH2)17NH3Br/CH3NH3Br with PbBr2 at 80 °C.12 However, the resulting CH3NH3PbBr3 nanoparticles exhibited only moderate PL quantum yield (PLQY) of ~20% and showed poor dispersity in colloidal solution. After optimization, however, the authors were able to achieve a significantly higher PLQY of 87%.20 Soon thereafter, Kovalenko et al. adapted the hot-injection technique to fabricate all inorganic CsPbX3 QDs with an even higher PLQY of ~90%.9 To accomplish this the authors used a PbX2 type material such as PbI2, PbBr2, PbCl2 or a mixture thereof, together with oleylamine (OLA) and oleic acid (OA, Cat. No. O1008), dissolved in 1-octadecene (ODE, Cat. No. 74740). An injection of Cs-oleate precursor at an elevated temperature of 140-200 °C initiated the nucleation and growth of highly luminescent colloidal CsPbX3 QDs with tunable emission spectra and PLQYs up to 90% (Figure 3B). However, CsPbX3 QDs synthesized by the hot injection method exhibited poor colloidal stability and rapidly precipitated from the crude solution. To solve this, Yassitepe et al. developed an improved amine-free strategy using OA as the surface ligand, obtaining enhanced colloidal stability and enhanced performance in EL devices.21 Protesescu et al. fabricated CH2(NH2)2 + doped CsPbI3 QDs by injecting a mixed precursor of CH2(NH2)2 + oleate and Cs-oleate.22 Other groups, including Rogach et al. explored other inorganic ligands, reporting the surface protection of CsPbX3 (X = Br or I) with a polyhedral oligomeric silsesquioxane.23 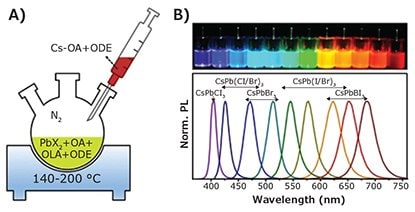 Reprecipitation through solvent mixing is a simple way to prepare organic nanoparticles or polymer dots simultaneously.25-27 Hybrid perovskites are soluble in many polar solvents, but are insoluble in non-polar ones. Based on the miscible pair of toluene and N,N-dimethylformamide (DMF, Cat. Nos. D158550, 900638, etc.), our group demonstrated ligand-assisted reprecipitation synthesis (LARP) to fabricate perovskite QDs via solvent mixing with the assistance of long chain organic ligands.10 Figure 4A schematically illustrates the LARP technique. In a typical synthesis of CH3NH3PbX3 QDs, the precursor solution (PbX2, CH3NH3Br, n-octylamine, and OA) was dropped into toluene. The change in solubility subsequently induces the formation of highly luminescent colloidal QDs. The investigation of solvent-precursor interactions helped provide insight on the influence of solvents on the formation process and obtained stable iodide-based CH3NH3PbI3 quantum dots, as well as morphology-controlled perovskite nanocrystals.28,29 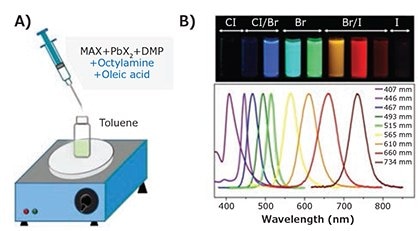 The LARP technique is both simple and versatile for the synthesis of halide perovskite QDs and other nanostructures. For example, Xiong et al. used it to synthesize amorphous pervoskite QDs and achieved bright EL devices.30 Jie et al. developed a simple dip-coating method to effectively fabricate large-area and uniformly dense films for multicolor EL devices.31 Other groups have adopted the LARP strategy for the synthesis of other perovskite QDs, including CsPbX3 QDs, CH2(NH2)2PbX3 and (CH3NH3)3Bi2X9 QDs.32-34 However, LARP still has some shortcomings as a synthetic route for device applications, such as low yields of CH3NH3PbX3 QDs, and the difficulty of cleaning and purifying the synthesized colloidal solutions, which greatly hinders the application of perovskite QDs to EL devices. Based on the immiscible solvents hexane and DMF, our group has further developed the emulsion synthesis method to obtain purified CH3NH3PbX3 QDs for use in EL device applications.35 Very recently, Sun et al. reported using thermally-induced crosslinking or radical-induced polymerization to address the stability issue and produce more efficient EL devices.36 Further, many groups are working toward the application of down conversion white LEDs for LCD backlights by capping and sealing perovskites QDs during or after their formation. The inclusion of insulating barrier coatings such as SiO2 or POSS also has potential to overcome stability issues.23,37,38

Both the hot injection technique and LARP synthesis utilize organic solvents and surface ligands, and both require difficult isolation and purification steps. Solid-state mechanosynthesis avoids the use of organic solvents, and has the potential to achieve scalable production.39,40 This strategy is depicted in Figure 5, where metal salts of AX and PbX2 are used as the immediate raw materials, producing reaction products in a single step after simple milling/grinding at ambient temperature.41 Highly luminescent QDs can then be obtained by further grinding/milling and surface treatment of the perovskite product with appropriate ligands such as OLA. Mechanical mixing, especially high-speed milling, induces heat and supplies reaction energy. Sonication is also effective at breaking bulk perovskite powder into nanoparticles.42 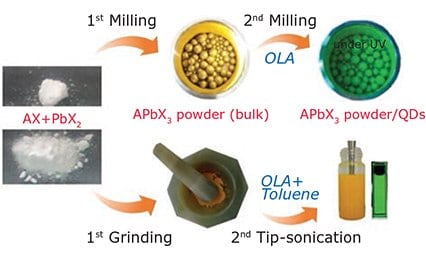 For device applications, fabricated QDs must be processed into composite or thin films. However, forming composite films with homogenous distribution or uniform films on proper interfacial layers remains a significant technical challenge. Because perovskites can be processed at room temperature, there are many ways to simplify the process for display applications using an in situ formation strategy. For example, Dirin et al. investigated the growth of perovskite nanocrystals in mesoporous silica (meso-SiO2) matrixes,43 and showed that it can serve as a facile, complementary, and ligand-free preparation route for outstanding perovskite-based composites with broadly tunable emission from the green to near-infrared. In this method, shown in Figure 6, highly concentrated solutions of the precursor salts, AX and PbX2, were inserted into the pores (width 2.5-50 nm) of various commercially available mesoporous silica templates, followed by the removal of excess solution, and then by drying induced the spatial crystallization of perovskite nanocrystals.

The use of mesoporous silica templates allows for the inexpensive and scalable preparation of lead halide perovskite composites. However, the inorganic matrix serves as a hard template and therefore, similar to the traditional rare-earth phosphors, the as-fabricated perovskite based composites require further encapsulation. The hard template does not offer good protection against aggregation, and it has been reported that significant decomposition occurs during the annealing of perovskite NCs in porous TiO2 at 85 °C, even in an inert atmosphere.

Regarding LCD backlight applications, a more appealing approach is the in situ fabrication of perovskite QD based composite films (PQDCF). The polymer matrix tends to form a coherent barrier layer around the perovskite QDs/NCs, protecting them from water, oxygen, and heat of the surrounding environment. Using this method, our group has demonstrated the in situ fabrication of CH3NH3PbX3 QDs embedded in polyvinylidene fluoride (PVDF) composite films by separating the crystallization processes of PVDF and CH3NH3PbX3 QDs through controlled evaporation of DMF.13 As illustrated in Figure 6, a typical fabrication of CH3NH3PbBr3 based PQDCF involved two main stages. In stage I, a mixture of MABr, PbBr2 and PVDF was dissolved in DMF, and then a uniform precursor film was obtained through solvent evaporation. In stage II, the colorless precursor films were moved out to remove the residual DMF, gradually resulting in green emissive PQDCF. Brightly-luminescent and color-tunable PQDCF with emissions ranging from 440 nm to 730 nm could be similarly obtained by varying the compositions of halides. These PQDCFs show enhanced PL properties with high PLQYs up to 90% (±5%), and improved stability against both moisture and UV radiation, making them useful for on-surface LCD backlight applications. A prototype LED device showed excellent merits in both color quality and luminous efficiency, optimal for display backlights. Soon after, Wang et al. reported a swellingdeswelling microencapsulation strategy that achieved welldispersed, intimately passivated perovskite QDs inside polymer matrixes that had high photoluminescence efficiency, color purity and ultrahigh stability against both heat and water.44

Among these several methods, the in situ formation strategy is currently the most promising method for achieving practical display applications, due to its simplified, low-cost, and largescale processing, as well as the enhanced photoluminescence and stability of the product. 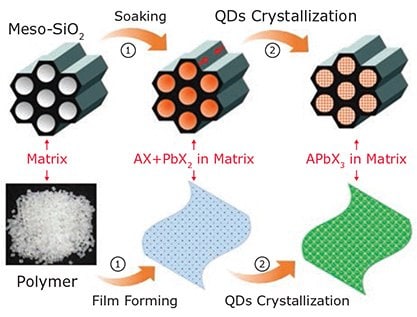 Figure 6.Schematic diagram of in situ formation strategy for perovskite QDs/NCs within inorganic and polymer matrices.

By adapting the synthetic strategies as previously described, perovskite QDs with superior PL properties have been successfully fabricated and explored for use in display applications. Although studies on perovskite QDs are still in their infancy, tremendous progress has been made toward overcoming the material challenges and technical problems of conventional QDs. By adapting the available techniques from well-developed CdSe QDs, the fundamental framework for implementation in display system appears to be wellestablished. Figure 7 describes the important features of CdSe, InP, and perovskite QDs. For LCD backlighting, perovskite QDs are advantageous in brightness and color gamut, but suffer from stability issues. Because of their easy scale-up and simple processing, mechanosynthesis and in situ formation are preferred for the fabrication of perovskite-based phosphors for LCD backlights. Building on these advances, the continuous work on material stability and device optimization has already generated the first TV demonstration at CES 2018 by TCL (International Consumer Electronics Show), which is expected to be commercialized in the coming year.

Apart from display applications, the perovskite QDs have also been investigated for solar cell applications. Recent work shows that under operation, perovskite solar cells using these materials retained 90% (97% after dark recovery) of their initial performance after 500 hours of continuous room temperature operation at their maximum power point under 1-sun illumination, a very promising development.45 Although the stability of perovskite QDs is still under debate, there is no doubt that perovskite QDs are highly promising candidates for EL devices. Currently, the device performance of perovskite QD-based EL devices (QLED) still lag behind welldeveloped CdSe QDs. Solution processing methods such as hot injection and LARP are expected to fabricate purified QDs that can be used in flexible printing QLED displays. We are looking forward to continued improvements in device performance, as well as growing applications for perovskite QDs in other display technologies such as light emitting cells and laser displays. 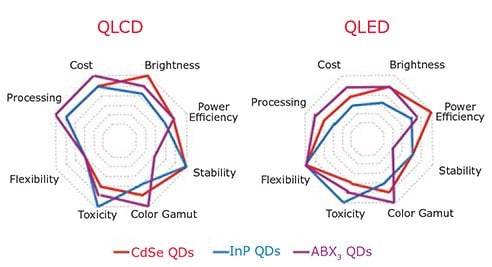 Figure 7.Comparison of the important featured of different ads for display applications.