Sterility testing is a GMP microbiology testing requirement used to confirm sterile products do not contain viable microorganisms before release and patient administration. Sterility testing methods must be as accurate as possible, due to their importance for medical devices, pharmaceutical products, and formulations, tissue materials, and other products that claim to be sterile or free from viable microorganisms.

Sterility testing procedures are applied to products in many industries, including food and beverage manufacturers, but the main industries are the pharmaceutical and medical sectors where the sterility testing of the products remains a vital and routine task for microbiologists.

Compendial methods for the sterility testing of pharmaceutical products requires samples to be cultured in two separate media. Two different types of culture media are used in sterility testing to promote the growth of residual anaerobes, as well as aerobes and fungi. Fluid thioglycolate medium (FTM) is typically used to culture anaerobic and some aerobic bacteria, while soybean casein digest medium (SCDM) is typically used to culture fungi and aerobic bacteria. Samples are incubated for 14 days at 32.5°C and 22.5°C respectively, prior to examination. Any turbidity in the culture media may indicate growth and must be investigated. There are two recommended methods of sterility testing for pharmaceuticals: membrane filtration and direct inoculation.

Membrane filtration sterility testing is the regulatory method of choice for filterable pharmaceutical products, as cited in the USP <71>, EU Pharmacopoeia < 2.6.1>, and JP Pharmacopoeia <4.06>. Samples are passed through a 0.45 µm membrane filter in a filtration canister and culture medium is added for incubation. This method of sterility testing can provide increased sensitivity in comparison to other methods as the whole sample, or a composite sample is passed through a single filter. Filtration also provides an opportunity to rinse away components in the sample that may cause turbidity or inhibit growth, such as antibiotics or preservatives.

In direct inoculation, a small volume of sample is removed aseptically from the sample unit and inoculated directly into a suitable volume of growth medium before incubation. While simple, this method of testing can have some significant limitations. Only small volumes of product can be inoculated into the culture medium, limiting the test sensitivity. If the sample appears cloudy or turbid after inoculation, it can be challenging to detect turbidity from microbial growth at the end of the incubation period. Additionally, if the product has antimicrobial properties, the sample must be neutralized so that microbial growth is not inhibited.

Direct transfer sterility testing is recommended for the sterility testing of medical devices. The device to be tested is in direct contact with the test media throughout the incubation period, during which any microorganism in or on the device will grow and proliferate. Furthermore, product flush sterility testing is preferred for products with hollow tubes, such as transfusion and infusion assemblies, where the fluid pathway is labeled as sterile. The product lumen is flushed with a rinsing fluid, the elute is membrane filtered and is placed in a suitable media for incubation. 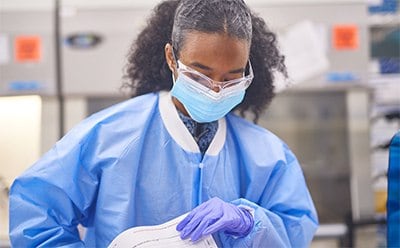 cGMP Biosafety testing services to investigate mAbs products and cell and gene therapy treatments and vaccines materials to ensure that they are free of adventitious agents or unexpected results that can cause catastrophic failures in downstream processing or patient treatment, including: Sterility testing.

System and Equipment Installation for Microbiology Testing Systems
Installation of your lab system is an important step before commissioning your equipment or prior to any qualification and it could be critical for system integrated in isolator.
Pharma Microbiology Method Development & Validation
When a microbial test method (S.O.P.) needs to be set up for a new product or improved for a product that demonstrates antimicrobial effects and/or filtration issues, our applications laboratory can develop a method that is compliant with applicable regulations (Pharmacopoeias). As a company, we are known for the quality of our products. We apply these same high standards to our methods development assignments and keep the same strict attention to regulatory compliance.
Pharma QC Systems Qualification
We understand the need for quality, cost containment, and regulatory compliance when it comes to the validation of your microbiology methods. With our validation protocols, we provide you the correct documentation to be used for audits and in front of the regulatory authorities. When on-site with a customer, our validation engineers ask the right questions as well as understand your application and the validation requirements of your equipment.
Maintenance & Service Plans
Browse our maintenance and service plans for Milli-Q water purification systems and our microbiology testing systems.