Conjugated Polymers for the Engineering of Device/Tissue Interface

There is considerable interest in the development of conjugated, electronically and ionically active polymers for interfacing active biomedical devices with living tissue.1-6 Conjugated polymers offer charge transport between inorganic, electrically conducting metals and organic, proton-conducting biological systems. These materials are potentially useful for a wide variety of bionic devices including cochlear, retinal, and cortical implants, as well as pacemakers and glucose sensors.7 Candidate materials that have been investigated include polypyrrole (PPy) and functionalized polythiophenes such as poly(3,4- ethylene dioxythiophene) (PEDOT).8-10 These materials can be deposited directly onto the surface of metal electrodes using an oxidative electrochemical deposition process.11-13 Although conjugated polymers are not as electrically active as conventional metals, they create a soft, high surface area film that results in a significant reduction in the electrical impedance of biomedical devices in the biologically relevant frequency range (around 1,000 Hz).12-14 This frequency corresponds to the typical pulse width of a neural signal (around 1–2 msec).15

An example microelectronic biomedical device incorporating conducting polymers, namely a silicon-based microfabricated cortical electrode, is schematically shown in Figure 1a.16 The schematic shows an approximately 40 micron diameter PEDOT coating (blue) deposited onto the last electrode site. Figure 1b shows the actual image of the electrode with the PEDOT coating (white) on one of the electrode sites. Figure 1c is an SEM image of the cross-section of a sample with a ~1 micron thick coating of electrochemically deposited PEDOT prepared in our laboratory at the University of Delaware. 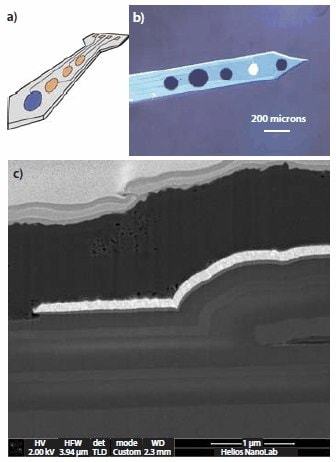 Figure 1.(a) Schematic of a microelectronic biomedical device with integrated conducting polymer coated domains (blue). (b) An actual image of a biomedical electrode with the PEDOT coating (blue) on multiple electrode sites. (c) This crosssectional SEM image of a biomedical device prepared in our laboratory showing an approximately 1μm thick layer of PEDOT overlaying a metal electrode was obtained on a Helios NanoLab Focused Ion Beam (FIB) instrument at the FEI Laboratory in Hillsboro, OR (fei.com).

PEDOT has been shown to be much more chemically stable than PPy, presumably because the diethoxy substituents replace the extra hydrogen atoms that lead to synthetic defects possible in PPy.17,18 The electron donating nature of the pendant PEDOT oxygen atoms also improves the conductivity of the molecule. It has been noted that there are striking chemical similarities between PEDOT and melanin, (Figure 2) the natural black pigmentation molecule synthesized by most plants and animals.

Figure 2.(a) The repeat unit of melanin, a natural, conjugated polymer pigment which absorbs UV light due to the conjugated backbone. (b) Synthetic PEDOT polymer with the similarities to melanin highlighted using red and green.

To further improve the performance of molecules such as PEDOT for electronic biomedical device applications, it is necessary to focus additional attention on two critical interfaces: (1) the junction between the solid metal substrate and the conjugated polymer, and (2) the junction between the conjugated polymer and the living tissue. In both cases, it would be useful to have molecules available that could better connect these two different materials. Here, we consider the nature of these material interfaces and describe several monomers that can be used to make functionalized copolymers of particular importance for both of these applications.

The mechanical strength and reliability of the conjugated polymer-metal interface are particularly important when designing biomedical devices. The adhesion of the polymer to the metal is a function of the surface treatment of the metal, the method of polymer deposition, and the counter-ion used during the deposition process.19,20 Molecular designs that could improve the interaction between the polymer and the metal surface are of particular interest, since they would ensure that the polymer coating will be bonded to the substrate as strongly as possible. It is important that any such design maintains efficient charge transport between the metal and the polymer, and eventually, the surrounding electrolyte. Typical metals used in biomedical devices include gold, platinumiridium alloys, and stainless steel. The metals are chosen because of their resistance to corrosion and their stability in vivo. One method to improve the polymer-metal adhesion is to create a functionalized conjugated monomer that has pendant groups designed to specifically bond with the metal surface of interest.21 Examples include thiol- or acid-functionalized monomers (Figure 3) that could be used to create a thin layer of covalently bonded thiophenes, which could subsequently be reacted to form a thicker layer of a conducting polymer film. The functionalized monomers can also be used selectively at the metalpolymer interface as an adhesion promoter, thereby reducing the total amount of material necessary in the device design. Figure 3.Chemical structures of (a) EDOT (Prod. No. 483028) and two example monomers that can be used to promote adhesion at the polymer-metal interface: (b) EDOT-Acid and (c) EDOT-Thiol.

It is possible to design and synthesize functionalized versions of pyrrole and thiophene monomers that can also be electrochemically polymerized.22 Thin films of functionalized PEDOT with various compositions and precisely controlled aqueous surface wetting angles (from 40–80 degrees) have been prepared using EDOT monomers with alcohol, acid, and amine functionalities.23 We have developed a carboxylic acid variant of EDOT that has the potential for a wide range of subsequent bio-functionalization opportunities, but its synthesis has proven somewhat difficult to scale up to useful quantities.21,24 A potentially more robust method involving the use of pendant alkynes capable of azide-alkyne cycloaddition or “click” reactions is illustrated in Figure 4.25-27

At the interface between the conjugated polymer and the tissue, it is also possible to envision functionalized thiophene monomers that can form specific interactions with cells or the extracellular matrix. For example, a thiophene could be functionalized with a biologically active pendant group, such as a peptide sequence known to bind strongly to receptors on cells (Figure 4). Examples include the widely studied RGD peptide sequence from fibronectin, or the (Ile-Lys-Val-Ala-Val) IKVAV and Tyr-Ile-Gly-Ser-Arg (YIGSR, Product No. T7154) sequences from laminin.28-30

Molecules that are similar to those of natural melanins are also of interest. One example we recently investigated is 5,6-dimethoxyindole- 2-carboxylic acid (DMICA), a methoxylated variant of a melanin repeat unit that can be readily deposited using methods similar to those used for PEDOT.31 The resulting polymer, PDMICA, is crystalline and has an olive-green color not seen in natural melanin. It is also electrochromic, switching from green, to purple, to clear as the voltage is cycled.

Functionalized thiophene monomers also offer many opportunities for solution polymerization of novel conjugated polymers with designed structure and properties. Examples include fully soluble conjugated polymers that could be used as fibers or sensors. The ability to create oriented assemblies of these materials through solution spinning or electrospinning should make it possible to understand and optimize their performance in applications.

David C. Martin is a Co-Founder of and Chief Scientific Officer for Biotectix, a University of Michigan spin-off company that is actively investigating the use of conjugated polymer-based materials for interfacing a variety of biomedical devices with living tissue (biotectix.com). The PEDOT film imaged in Figure 1c was deposited by Dr. Bong Sup Shim. This work has been supported in part by the National Institutes of Health, the National Science Foundation, and the U. S. Army Research Office MURI Initiative on Biointegrating Structural and Neural Prosthetic Materials (W911NF-06-1-0218).