Queens College of the City University of New York 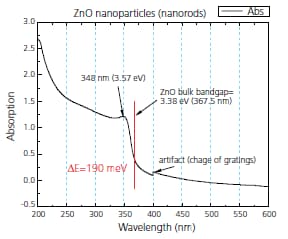 Solvothermal synthesis is a method for preparing a variety of materials such as metals, semiconductors, ceramics, and polymers. The process involves the use of a solvent under moderate to high pressure (typically between 1 atm and 10,000 atm) and temperature (typically between 100 °C and 1000 °C) that facilitates the interaction of precursors during synthesis. If water is used as the solvent, the method is called “hydrothermal synthesis.” The synthesis under hydrothermal conditions is usually performed below the supercritical temperature of water (374 °C). The process can be used to prepare many geometries including thin films, bulk powders, single crystals, and nanocrystals. In addition, the morphology (sphere (3D), rod (2D), or wire (1D)) of the crystals formed is controlled by manipulating the solvent supersaturation, chemical of interest concentration, and kinetic control. The method can be used to prepare thermodynamically stable and metastable states including novel materials that cannot be easily formed from other synthetic routes. Over the last decade, a majority (~80%) of the literature concerning solvothermal synthesis has focused on nanocrystals; therefore, this review will highlight some advances in nanocrystalline, solvothermal synthesis.

Interest in nanocrystals is driven by their unique properties. One example of the unique properties of nanocrystals is illustrated by the discovery of solvothermally synthesized quantum dots (QDs). Luis Brus1,2 first explained that hydrothermally prepared nanoparticles of cadmium sulfide, CdS, in an aqueous suspension, had a blue shift in the visible absorption and emission spectra compared with bulk CdS. Particles whose radius is less than the Exciton Bohr Radius exhibit discrete energy levels similar to single atoms. Unlike the band energies observed in bulk materials, every unique crystal diameter on the nanoscale corresponds to a discrete energy. Materials that exhibit this characteristic are called “artificial atoms” or quantum dots. Recent reviews3–5 elucidate the degree to which solvothermal synthetic techniques are now an essential technique for controlling the size of the II–VI and III–V semiconductor materials. Synthesis of the QDs typically requires a cation source material that is soluble in the chosen solvent and a surfactant that caps or stabilizes the quantum dot, arresting its growth. For example, CdSe QDs are prepared by dissolving CdO in trioctylphosphine oxide (TOPO) and trioctyl phosphine (TOP), which acts as both a solvent and capping agent. The solution is heated to 300 °C, after which elemental selenium dissolved in tributylphosphine (TBP) is added. The reaction is then quenched and nanocrystals are observed.6

Zinc oxide is another example of a II–VI compound that can be prepared solvothermally and will exhibit quantum dot effects.7 In one method, zinc acetate dihydrate was dissolved in 2-propanol at 50 °C. Subsequently, the solution was cooled to 0 °C and NaOH was added to precipitate ZnO. The solution was then heated to 65 °C to allow ZnO growth for a period of time before a capping agent (1- dodecanethiol) was injected into the suspension to arrest the growth. The rod-shaped ZnO nanocrystals (Figure 1) exhibit an absorption spectrum (Figure 2) indicative of the quantum effect. 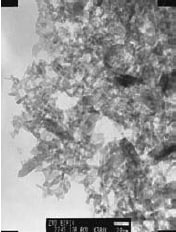 Quantum dots can be synthesized by the solvothermal route in many shapes including spheres, rods, tetrapods, and teardrops by controlling the temperature, concentration, and reaction time.8 Additionally, a shell of one composition (e.g., ZnS) can be synthesized over a core of another nanocrystal (e.g., CdS).9 The core can also be used as a seed to grow larger particles by adjusting the concentration after the initial growth. Many quantum dot applications are optimized by size and shape control, and solvothermal synthesis is a key technology for achieving this control.

Compared to II–VI materials, III–V compounds are more difficult to process by the solvothermal method.4 One method of synthesis of nanosized InSb is the reduction of InCl3 and SbCl3, by NaBH4 at 200 °C, using diethylenediamine (DETA) as a solvent.10 This material was irregularly shaped and agglomerated and therefore did not exhibit the quantum dot effect. However, recent work on phosphide (InP) and nitride (GaN), as well as arsenide (GaAs) III–V semiconductors, did exhibit quantum dot properties.

Although metallic particles can also exhibit the quantum dot behavior, their Exciton Bohr Radius is much smaller than the semiconductors, resulting in significant synthetic challenges. However, metallic nanoparticle synthesis is of current interest for applications in nanocircuits and devices. The size, shape, and type of material desired depends on the application. For example, the desire for higher density magnetic recording devices initiated the development of a new nano-sized ferromagnetic material based on the 3D self-assembly of two distinct sizes of magnetic particles of Fe3O4 (8 nm) and Fe58Pt42 (4 nm) into a superlattice colloidal crystal.11 The self-assembly occurs when the particles have less than a 5% size distribution. The monosized Fe3O4 particles were prepared from iron (III) acetylacetonate, in phenyl ether in the presence of alcohol, oleic acid, and oleylamine at 265 °C.11 The monosized Fe58Pt42 was synthesized by the reduction of platinum acetylacetonate by 1,2- hexadecanediol and the decomposition of iron pentacarbonyl in the presence of oleic acid and oleyl amine stabilizers.11

Similar types of magnetic particles, as well as metallic nanoparticles and quantum dots, are finding applications in biosensors. These nanoparticles require hydrophilic surface moieties in order to be compatible with biomolecules. Hydrothermally prepared nanoparticles are particularly suited to biotech applications because the nanoparticles are hydrophilic due to surface hydroxyl groups. However, these hydroxyls often influence the properties of interest in the nanoparticle (e.g., reduce the quantum yield of QDs or oxidize the surface of metals). Other solvothermal routes, however, can be used to prepare nanoparticles which, upon the addition of surfactants, are made hydrophilic. Gold particles are of particular interest because of their inert nature. Monosized gold particles were prepared by the solvothermal reduction process similar to that described by Chen and Kimura.12 In this method, hydrogen tetrachloroaurate tetrahydrate was reduced with sodium borohydride and mercaptosuccinic acid was used as a stabilizer. Figure 3 displays a micrograph of gold nanoparticles selfassembled onto a copper surface. In summary, the solvothermal synthesis of nanoparticles is finding wide applications from nanocircuits and nano-optical circuits to nanomagnetics and biotech. The ability to control the size and shape of a host of materials makes this technique versatile, economical, and facile.