Over the past two decades, the rapid advance of controlled living polymerization (CLP) techniques, such as ring-opening polymerization (ROP),1 nitroxide-mediated polymerization (NMP),2 atom transfer free radical polymerization (ATRP),3 and reversible addition-fragmentation chain transfer (RAFT) polymerization,4 has enabled synthesis of welldefined polymers with controlled molecular weight and narrow molecular weight distribution (MWD) that are tailor-made for biomedical applications. There is an increasing demand for multifunctional synthetic polymers capable of interacting with, mimicking, or replacing natural materials for use in applications such as drug delivery, molecular imaging, cell therapy, and tissue engineering. One common strategy for the synthesis of multifunctional materials is to combine different synthetic techniques that involve complicated and multistep preparation and purification.5 The result, however, is often low reaction yield, batch-tobatch variation, and difficulties in scale-up. Thus, there is considerable need for simplified approaches to synthesis of polymers with advanced architectures and/or bioactive properties. This is particularly important for biomedical applications where simplified synthetic methods are advantageous for scale-up, manufacturing, and FDA approval. Doublehead polymerization agents have been developed to meet this demand and provide an elegant and robust approach to achieve this aim. These agents provide a nucleus that integrates different synthetic methods: e.g., CLP,1-4 click chemistry,6 and thiol chemistry.7

Double-head agents, (also called dual, bifunctional, or heterofunctional initiators) contain two functional sites capable of initiating concurrent polymerization independently and selectively. The use of double-head agents offers three advantages over conventional methods for polymer synthesis. The double-head agent: 1) provides an opportunity to prepare block copolymers in a concurrent, one-step manner without the need for intermediate transformation and protection steps, which is especially useful for the synthesis of block copolymers based on mechanistically incompatible monomers; 2) offers flexibility to the central bridge (block junction) connecting both functional ends that can be customized to meet the requirements for specific applications; and 3) affords two functional termini for the resulting block copolymer.

This review highlights recent progress in this field, with an emphasis on two types of double-head agents with symmetric and asymmetric structures, respectively (Table 1 on the following page). The preparation of polymers using these double-head agents and their biomedical applications are summarized in Figure 1. Finally, a perspective on the future direction of this rapidly developing research field is presented. 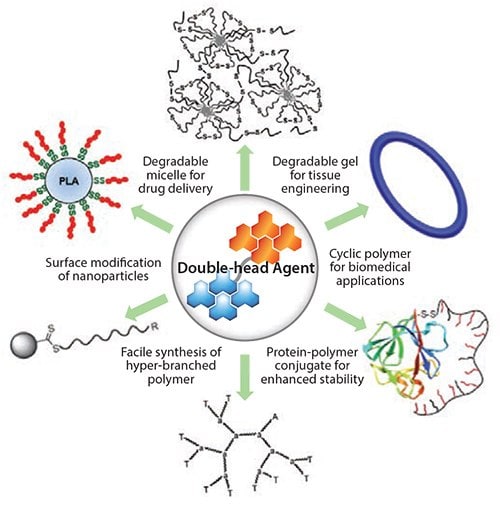 Symmetrical double-head agents contain the same functional group at each end and are used to initiate simultaneous polymerization from both sides of the agent. These agents have been used to synthesize polymers with internal degradable bridges and also to incorporate functional termini in the cleaved polymer.

Tsarevsky and Matyjaszewski first reported the design of a degradable disulfide-bridged bifunctional ATRP initiator, bis[2-(2-bromopropionyloxy) ethyl] disulfide (BBPrEDS) (Prod. No. 723169) for the synthesis of degradable linear polystyrene (PS).8 Dithiothreitol (DTT) was used as a reducing agent to break the disulfide bridge and to obtain free thiolterminated PS with half the molecular weight of the parent polymer.

The BBPrEDS bifunctional initiator was used by Armes and co-workers to synthesize an ABA triblock copolymer by polymerizing first 2-(methacryloyloxy)ethyl phosphorylcholine (MPC) followed by N-isopropylacrylamide (NIPAAm), resulting in the PNIPAM80–PMPC125-SS-PMPC125–PNIPAM80 ABA triblock copolymer.9 This triblock copolymer formed a free-standing gel under physiologically relevant conditions at 37 °C and a copolymer concentration above approximately 8% (w/v). Cleavage of the central disulfide bond by biomolecules such as glutathione caused irreversible dissolution of the micellar gel. These copolymers constitute a new class of injectable gelators that are both biochemically responsive and thermo-responsive and could be useful as depots for localized drug or cell delivery.

Haddleton et al. reported the synthesis of two bifunctional ATRP initiators bearing Diels–Alder adducts—one based on a furan–maleimide adduct and the other based on an anthracene–maleimide adduct—which were used for the synthesis of linear poly(methyl methacrylate) (PMMA).10 The presence of the Diels–Alder adduct in the middle of the polymer chains allowed for their temperature-modulated reversible cleavage. These “selfhealing polymers” can be degraded by heating at high temperature and reformed by heating at lower temperature.

The synthesis of block copolymers based on mechanistically incompatible monomers using asymmetrical double-head agents has attracted considerable attention due to the simplified synthesis and the possibility of a concurrent, one-step process. The hetero double-head agent has two different functional groups that can perform two mechanistically different reactions/polymerizations without intermediate transformation steps. To obtain well-defined block copolymers using this agent via a one-step process, there should be no interactions between the two functional groups, catalysts or initiators, and monomers. In addition, the two polymerizations should proceed in a controlled manner at the same reaction temperature.13 Because of these limitations, most of the block copolymers synthesized using hetero double-head agents to date are prepared by a sequential reaction. This section reviews polymers synthesized using asymmetrical double-head agents with an emphasis on materials useful in biomedical applications.

The Maynard group employed a series of ATRP initiator-based doublehead agents in an elegant approach to prepare polymer-protein conjugates.14-16 In one study, a pyridyl disulfide (PDS)-modified ATRP initiator was used to prepare a well-defined poly(2-hydroxyethyl methacrylate) (P(HEMA)) that was then conjugated to bovine serum albumin.14 In the second report, a biotinylated ATRP initiator was bound to streptavidin and used as a protein macroinitiator for polymerization of NIPAAm.15 Finally, peptide macroinitiators were synthesized using amino acids with side-chain modified-ATRP initiators in solid-phase peptide synthesis. These macroinitiators were used to synthesize peptide-polymer (e.g., PHEMA and glycopolymers) conjugates exhibiting narrow molecular weight distributions, resulting in well-defined materials.16

Among the click chemistry group of reactions for facile coupling, the CuI-catalyzed azide-alkyne cycloaddition (CuAAC “click”)17 has received the most attention and has been increasingly employed in polymer functionalization and materials synthesis, especially in conjunction with controlled radical polymerization methods.18 The CuAAC “click” is particularly well-suited for pairing with ATRP, due to the ease of incorporating clickable functionality into polymers prepared by ATRP and the use of the same catalyst system in each process. The combination of these two powerful techniques has greatly expanded the range of available materials. In one example, the Grayson group used an alkynefunctionalized ATRP initiator to prepare cyclic polymers.19 Following this methodology, Wei et al. prepared cyclic cationic polymers for nucleic acid delivery and demonstrated that the cyclic polymers were just as effective in gene transfer but less cytotoxic to cultured mammalian cells compared with their linear analogues.20 Another useful agent was prepared by the Gohy and Fustin group; this ATRP initiator contained an o-nitrobenzyl ester photocleavable junction and an alkyne group for the CuAAC “click” reaction.21

Oh et al. prepared a reducible version of a double-head initiator (HO-SSiBuBr)22 for integrated ATRP and ROP techniques (HO-iBuBr, Prod. No. 723150)23 introduced by the Matyjaszewski group. In the presence of OH-SS-iBuBr, both ROP of lactide and ATRP of oligo(ethylene glycol) methyl ether methacrylate (OEGMA) were controlled, resulting in welldefined biodegradable block copolymers of PLA-SS-POEGMA with narrow MWD (<1.2). Aqueous micellization of PLA-SS-POEGMA resulted in core/shell micelles with SS links positioned at the interface between PLA cores and POEGMA coronas. In reducing environments such as the cytosol, POEGMA coronas were shed from the PLA cores, causing the precipitation of PLA core due to the loss of colloidal stability. These results, combined with non-cytotoxicity, indicated that the biodegradable PLA-based sheddable micelles could be useful as novel drug delivery systems for intracellular drug delivery.

Using this same double-head agent, Wei et al. synthesized a ternary, amphiphilic block copolymer PCL-SS-P((GMA-TEPA)-st-OEGMA) containing a sheddable hydrophobic PCL block, pH-sensitive oligoamine tetraethylenepentamine (TEPA)-decorated poly(glycidyl methacrylate) (PGMA) block, and a hydrophilic OEGMA segment.24 The sheddable hydrophobic PCL block was synthesized by ROP using the reducible double-head initiator HO-SS-iBuBr and then used as a macroinitiator for subsequent ATRP of GMA and OEGMA. This new block statistical copolymer combines reversible hydrophobization for enhanced particle stability in extracellular environments and statistical hydrophilization for efficient plasmid and siRNA release inside cells. This polymer was shown to be effective for in vivo gene transfer to mouse brain due to its multifunctional and bioresponsive properties.

Advanced polymer structures also can be prepared using RAFT CTAbased double-head agents. Youk and co-workers synthesized welldefined block copolymers using 4-cyano-4-(dodecylsulfanylthiocarbonyl) sulfanylpentanol (CDP) as a dual initiator for RAFT polymerization and ROP in a one-step process.28 In one example, block copolymers with one block synthesized by RAFT polymerization of vinyl monomers and a second block synthesized by ROP of cyclic monomers were prepared in a one-step synthesis with selective catalysts for ROP that did not interfere with RAFT polymerization. RAFT polymerization in the presence of a compound capable of both reversible chain transfer through a thiocarbonylthio moiety and propagation via a vinyl group leads to highly branched copolymers. Sumerlin et al. synthesized an acryloyl trithiocarbonate and performed copolymerization with NIPAAm in ratios selected to control the distribution and length of branches in the resulting thermo-responsive copolymers.29 Retention of the active thiocarbonylthio compound during the polymerization was evidenced by a successfully subsequent chain extension of the resulting branched PNIPAAm macro-CTA by a further RAFT polymerization of a second monomer. This approach could be extendable to the synthesis of a variety of branched stimuli-responsive copolymers with a high concentration of sulfur-containing end groups that can facilitate polyvalent bioconjugation or surface immobilization.

Wei et al. introduced a reducible RAFT–ATRP double-head agent for the synthesis of peptide-functionalized copolymers with sheddable shielding blocks for nucleic acid delivery applications.30 An optimized reduction-responsive cationic block copolymer, P(OEGMA)-SS-P(GMATEPA), was synthesized using this double-head agent by a combination of RAFT polymerization of OEGMA and ATRP of glycidyl methacrylate (GMA), followed by post-polymerization decoration of reactive epoxy groups in the P(GMA) block by tetraethylenepentamine (TEPA). The resulting diblock copolymer showed well-controlled composition with narrow MWD and was easily modified with a neuron targeting peptide, Tet1, at the outer corona by a Michael-type addition to the free thiols generated by aminolysis of the dithioester end group. The final polymer formed salt-stable particles amenable for in vivo use while maintaining high transfection efficiency, likely due to its multifunctional capabilities of targeting, endosomal escape, and deshielding and cargo release endowed by the Tet1 peptide, protonable TEPA amines, and reducible backbone structure, respectively (Figure 2). Thus, due to the combined properties of targeting and shielding, this block copolymer was shown to retain high transfection efficiencies comparable to the analogous homopolycation vectors for targeted gene delivery. The RAFT-ATRP double-head agent, therefore, provides a versatile means for preparing various types of multifunctional drug and gene delivery vehicles. 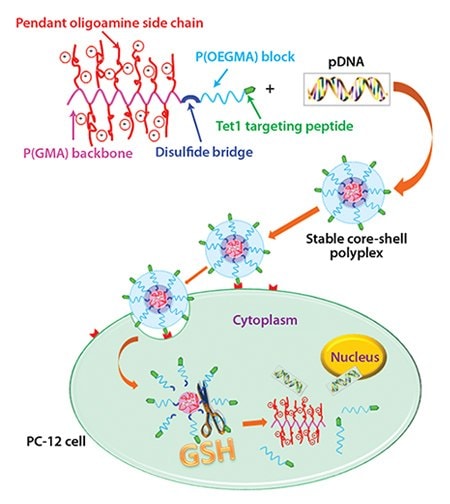 The design and development of various double-head agents represent an elegant approach toward advanced materials design. With double-head agents, different polymerizations/reactions can be carried out without intermediate transformation and functionalization steps, sometimes even in a concurrent manner, significantly simplifying the traditional techniques for the preparation of block copolymers as well as generating a broad spectrum of novel block copolymers with fascinating properties based on diverse monomers. It is not surprising that the last decade has seen a tremendous growth in the development of such agents.

It is worth noting that the disulfide bond has attracted most of the attention, and it has been repeatedly employed as the degradable link in a double-head agent due to the excellent compatibility of disulfide with CLP processes, the reversible degradation and formation of the disulfide bond under mild conditions, and also the biological relevance of disulfides. Future research concerning the use of other stimuli-responsive links, such as acidic pH, temperature, enzyme-responsive substrates, and photo-sensitive bridges for the preparation of degradable double-head agents will be a hot topic and remains to be explored.

Looking to the future, much exciting work is expected to develop in the new field of advanced biomaterials prepared using various double-head agents.