A versatile organism with a diversified range of species

Yeast is one of the most important microorganisms known and utilized by mankind. Ancient Middle Eastern civilisations used the organism to bake bread and to produce mead, beer and wine.

Yeast is one of the best studied eukaryotic organisms and is often used in molecular biology as well as diverse other applications. It is the most frequently used organism for fermentation. Yeasts are unicellular fungi, although they sometimes build multicellular constructs known as pseudohyphae, or false hyphae. Most yeasts are not pathogenic; however there are certain strains that can cause infections in humans. In current technology, yeasts have an important role in the production of biofuels. The biomass from yeast is also used as a nutritional supplement or as a component of microbiological media. It is also an important source of vitamin B12.

The natural sources of yeast vary broadly. They may be found in the ocean, on the human and animal skin, and on fruit skin.

The sexual reproduction method (meiosis) entails division of a diploid chromosome set and production of haploid spores, which then may conjugate with another cell to reform a diploid cell. However, haploid cells will generally die under stress, while spores can survive harsh conditions.

There are diverse species of yeasts with a broad range of applications. While the majority of yeasts are benefi cial to humans and provide benefi ts such as biotechnological advancements, other unpleasant organisms may lead to infections or cause spoilage of fruit juices and alcoholic beverages. Some of the best-known yeast species with their respective descriptions are listed in the info box on the right-hand side. For the detection, enumeration and cultivation of yeasts, the classical culture method is still needed. The media are in many cases very simple, as yeast is non-fastidious. Regarding selectivity, oxytetracyclin, gentamicin, chloramphenicol, rose bengal, chlortetracycline, and bismuth ammonium citrate at low pH conditions are often used. For diff erentiating the morphology of the colony, the microscopic image (budding, spore production, mycel/pseudo-mycelium forming) and biochemical reactions are used. An overview of some common media is given in Tables 2 and 3.

Chromogenic media, one of the cleverest systems, provide a perfect solution for the selective isolation, diff erentiation and identifi cation of moulds and yeasts. With the aide of chromogenic substrates, certain characteristic enzymes are detected, and antibiotics inhibit bacterial growth. Diff erentiation is easy because of the diff erent colours of the colonies, depending on the species, caused by the ability to cleave diff erent chromogenic substrates (see Table 3 and Figure 2). 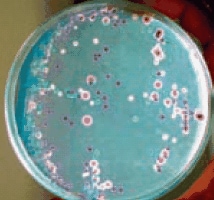 The HybriScan® Test Kit is a new technology based on a rRNA probes sandwich method. It is possible to detect diverse species or a group of organisms at the same time if the appropriate probes are chosen. The test needs no PCR and is as simple as the ELISA test. It is a very robust system and detects only living cells, unlike the PCR. It is also possible to quantify the cell numbers with a colour reaction and microplate reader. The HybriScan®D Yeast kit was designed with a specifi c probe for yeasts of the family of Saccharomycetaceae. The HybriScan®D Drink kit detects additional beverage-spoiling bacteria.

More information about the theoretical background of the system, additional kits available, and much more, can be found here.