Graphene oxide (GO, product numbers 763705 and 777676) is a unique material that can be viewed as a single monomolecular layer of graphite with various oxygen containing functionalities such as epoxide, carbonyl, carboxyl and hydroxyl groups.1,2,3 Interest in GO increased dramatically after graphene, a single layer of graphite, was first isolated and studied.4 It was initially hoped that GO might be a synthetic precursor to graphene.5 When the electrically insulating GO is reduced, the reduced graphene oxide (GO, product number 777684) formed resembles graphene but contains residual oxygen and other heteroatoms as well as structural defects.6,7 A fabrication procedure for rGO that more closely resembles pristine graphene is an outstanding challenge in the field. Nevertheless, since rGO can be made as a thin film from an aqueous dispersion of GO in water and has moderate conductivity, it is attractive for use in electronic devices.8,9,10,11,12 In addition to being components in electronic devices, GO and rGO have been used in nanocomposite materials,13,14 polymer composite materials,13 energy storage,14 biomedical applications,15,16,17 catalysis,18,19,20 and as a surfactant21 with some overlaps between these fields.

Synthesis and Reduction of GO

Many modern procedures for the synthesis of GO are based on the method first reported by Hummers in which graphite is oxidized by a solution of potassium permanganate in sulfuric acid.22 Reduction of GO using hydrazine has been reported.5 However, hydrazine is highly toxic and can potentially functionalize the GO with nitrogen heteroatoms.23 Because of these issues, alternatives to hydrazine including NaBH4,14 ascorbic acid,24 and HI25,26 among others have been used for the reduction of GO. GO can be reduced as a thin film or in an aqueous solution. Reduction methods have been recently reviewed.6

Several electronic devices have been fabricated using GO as a starting material for at least one of the components. One such device is a graphene based field effect transistor (GFET).27,28 Field effect transistors (FETs) that employ rGO have been used as chemical sensors29,30,31 and biosensors. An diagram of GFET sensors is shown in Figure 1.31 GFETs that use functionalized rGO as the semiconductor have been used as biosensors to detect hormonal catecholamine molecules,32 avidin,33 and DNA.34 In another study, GO that was functionalized with glucose oxidase and deposited on an electrode was used as an electrochemical glucose sensor.35

Nanocomposites of rGO have been used for high capacity energy storage in lithium ion batteries. In these studies, electrically insulating metal oxide nanoparticles were adsorbed onto rGO to increase the performance of these materials in batteries.40,41,42,43,44 For example, the energy storage capacity and cycle stability was shown to increase for Fe3O4 on rGO versus pure Fe3O4 or Fe2O3 (Figure 2).43 High surface area rGO has been made using microwaves for exfoliation and reduction of GO. The high surface area rGO formed is useful as an energy storage material in supercapacitors.45,46

One use of GO in the biomedical field is as a component in drug delivery systems. Functionalized nanographene oxide (nGO, product number 795534) has been used in several studies on targeted delivery of anti-cancer drugs. Polyethylene glycol (PEG) functionalized nGO with SN38, a camptothecin (product number H0165) derivative, adsorbed onto the surface (nGO‒PEG‒SN38) was used to as a water and serum soluble source of the drug.47 In that study, nGO‒PEG‒SN38 was shown to be three orders of magnitude more effective than irinotecan (CPT-11), an FDA approved SN38 prodrug, at reducing the cell viability of human colon cancer cell lines HTC-116 (Figure 3).47 The effectiveness of nGO‒PEG‒SN38 was similar to SN38 in DMSO (Figure 3).47 Melanoma skin cancer in mice has been treated using photothermal ablation therapy with a near-infrared laser and nGO that was functionalized with PEG and hyaluronic acid and delivered transdermally.48 In a separate study, magnetite was adsorbed onto GO loaded with the anti-cancer drug doxorubicin hydrochloride (DXR, product numbers D1515 and 44583) for targeted delivery of the drug to specific sites using magnets.49 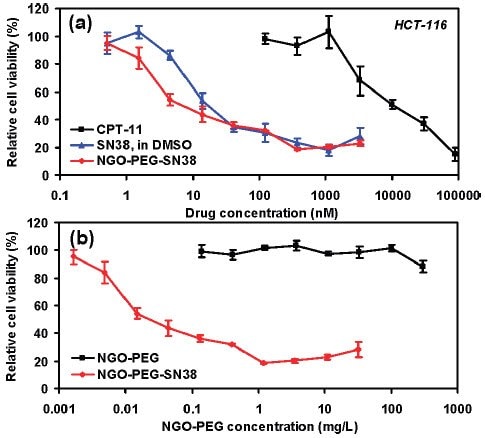 Figure 3.In vitro cell toxicity assay. (a) Relative cell viability (versus untreated control) data of HCT-116 cells incubated with CPT-11, SN38, and NGO‒PEG‒SN38 at different concentrations for 72 h. Free SN38 was dissolved in DMSO and diluted in PBS. Water soluble NGO‒PEG‒SN38 showed similar toxicity as SN38 in DMSO and far higher potency than CPT-11. (b) Relative cell viability data of HCT-116 cells after incubation with nGO-PEG with (red) and without (black) SN38 loading. Plain NGO‒PEG exhibited no obvious toxicity even at very high concentrations. Error bars were based on triplet samples. NGO = nGO. Adapted with permission from reference 47. Copyright 2008 American Chemical Society.

GO and rGO have been used as components in several systems designed to detect biologically relevant molecules. GO has been used as a fluorescence quenching material in biosensors which utilize the fluorescence resonance energy transfer (FRET) effect. In one study by Lu et al., single-stranded DNA (ssDNA) with a fluorescence tag was found to bind noncovalently to GO with subsequent quenching of the fluorescence of the tag.50 Addition of a complementary ssDNA removed the tagged DNA from the GO surface and restored the fluorescence. The FRET effect was also used with a fluorescein labeled ATP aptamer to sense ATP as low as 10 μM.51 Folic acid functionalized GO was used as a component in a system used to detect human cervical cancer and human breast cancer cells.52