Chiral phosphines have been the staple ligands for asymmetric transition metal catalysis and more recently operate as catalysts in organic phosphinocatalysis. Chiral phosphines that possess a stereogenic phosphorous center, while useful, have been challenging to prepare and difficult to handle owing to their susceptibility to aerobic oxidation. By utilizing naturally occurring amino acid L-hydroxyproline as the starting material, Prof. Ohyun Kwon’s laboratory prepared twelve different P-chiral phosphines with a 2-aza-5-phosphabicyclo[2.2.1]heptane scaffold. These twelve phosphines differ by the stereochemistry at the phosphorous center and exocyclic substituents on both the phosphorous and nitrogen atoms of the 2-aza-5-phosphabicyclo[2.2.1]heptane framework.

The synthesis, starting from L-hydroxyproline, is highly modular and could allow for additional bicyclophosphine structures on top of the twelve reported by Kwon and co-workers. The rigid 2-aza-5-phosphabicyclo[2.2.1]heptane scaffold renders a crystalline property to the Kwon phosphines, improving their aerobic stability and allowing for their handling outside of a glovebox. While reported for organic phosphinocatalysis applications, the Kwon phosphines should also find use in asymmetric transition metal catalysis in the future.

Endo-phenyl Kwon bicyclic [2.2.1] phosphine (798363) was used in the key enantioselective [3 + 2] annulation of the (+)-ibophyllidine total synthesis. The resulting indolylpyrroline was advanced through a sequence of subsequent transformations, eventually leading to the first catalytic enantioselective total synthesis of (+)-ibophyllidine. This approach was the first non-formal total synthesis of a complex natural product to employ phosphine-catalyzed [3 + 2] annulation between activated imines and electron-deficient allenes.1

In 2014, Prof. Ohyun Kwon’s laboratory reported an employment of the two bicyclic [2.2.1] phosphines, endo-phenyl (798363) and exo-phenyl (798371), for the asymmetric syntheses of 1,2,3,5-substituted pyrrolines. In this study, the two diastereoisomeric phosphines function as pseudoenantiomers, producing their pyrrolines in opposite enantiomeric forms.2 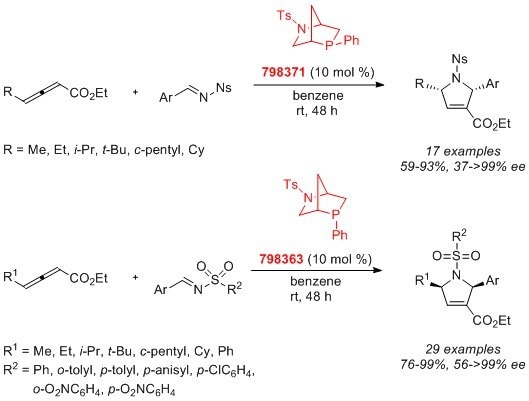 There have been several reports on the employment of Kwon phosphines in nucleophilic catalysis reactions.3–5 Among them, Tong and his colleagues used Kwon’s endo-phenyl catalyst (798363) for efficient asymmetric syntheses of 2-oxabicyclo[3.3.1]nonanes and cyclopenta[a]pyrrolizines, important frameworks found in bioactive molecules. Both high yields and enantioselectivity were obtained through phosphine-catalyzed addition/cycloaddition domino reactions starting with β'-acetoxy allenoate.6 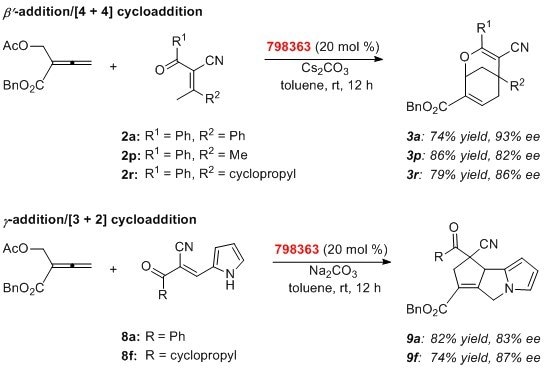 Special thanks to Professor Ohyun Kwon for contributing this Technology Spotlight!