Single-walled carbon nanohorns (SWCNHs), also called carbon nanohorns (CNHs), are a kind of nano-carbon materials such as carbon nanotubes and graphene, which were discovered by Iijima et al in 1998.1 Each SWCNH has a tubular structure made of a single graphene sheet, which is similar to the single-walled carbon nanotube (SWCNT).2 However, SWCNHs differ considerably from SWCNTs in that they have long cone-shaped tips with cone angles of about 20° and large tube diameters of 2 – 5 nm, and thousands of SWCNHs form spherical aggregates with diameters of 80 – 100 nm (Figure 1). The SWCNHs indicate fine intrinsic properties such as high dispersibility,3 high conductivity,4 and large specific surface area.5 Therefore, potential applications of SWCNHs include gas adsorption,6,7 capacitors,8-10 sensing applications,11 catalytic supports,12-14 composite materials,15 and drug delivery system carriers.16-18 Mass-production technology was developed faster due to the implementation of these applications. Recently, large-scale production of SWCNHs with high purity by CO2 laser ablation of graphite without a catalyst has been performed, and a production rate of 1 kg/day has been achieved.19 In this technical spotlight, we describe the large-scale production method, material properties, and applications of SWCNHs.

The CO2 laser was operated at 3.5 kW in the continuous emission mode. The target was rotated spirally at 2 rpm for 90 min during the laser ablation, which made continuous production possible. During the laser ablation, the obtained SWCNHs were transferred through the transportation pipe to the collection chamber. In the collection chamber, high-purity SWCNHs were deposited at the bottom of the chamber where there was a gate for attaching an SWCNH storage bottle. When the bottle was filled with SWCNHs, it was detached without interrupting the continuous production of SWCNHs. By using this manufacturing system, SWCNHs were obtained continuously at a rate of 100 g/h, and the SWCNH production of 1kg/day can be achieved. Figure 3a shows an SEM image of as-grown SWCNHs obtained by using manufacturing equipment.  Each spherical structure was approximately uniform. The diameters of the aggregates were estimated to be about 50-150 nm from direct observation of SEM images.

Figure 3.(a) SEM image and (b) particle-size distribution of SWCNHs.

The particle-size distribution of SWCNHs in the ethanol-dispersion solution was evaluated by dynamic light scattering (DLS) measurements (Figure 3b). Most aggregates existed in the range of 70 to 200 nm, which agrees well with the SEM results. Each SWCNH aggregate was easily mono-dispersed in ethanol. This dispersion was stable and lasted for several hours. The SWCNHs can also disperse in other organic solvents more easily than nanocarbon materials such as carbon black and/or carbon nanotubes. The as-grown SWCNHs did not disperse at all in water because they are hydrophobic.

Figure 4  shows the weight-temperature curves in O2 atmosphere obtained by thermogravimetric analysis (TGA). The derivative curves of the weight-decrease to temperature are also shown; the main peak appears at about 620 °C for SWCNHs. The peak indicates that the combustion of SWCNHs originated from dahlia-type and petal-type SWCNHs.19 Therefore, the purity of the SWCNHs become above 90 wt%. The peak at 760 °C was attributed to micrometer-sized graphitic impurities formed intrinsically from the graphite target by CO2 laser ablation.20 Figure 6 shows the N2 adsorption isotherms of SWCNHs and holey-SWCNHs at 77K. The adsorbed amount of nitrogen increased with the increasing relative pressure, the shapes of the adsorption isotherms were almost identical. However, the lower pressure adsorption quantity drastically increased for holey-SWCNHs. The specific surface area of SWCNHs and holey-SWCNHs was estimated at 420 and 1320 m2/g, respectively. The value of holey-SWCNHs was three times larger than that of SWCNHs because the inside spaces of nanohorns become accessible due to opening of the nanohorn sheaths. The maximum previously reported value is 1720 m2/g.10

The inside space of holey-SWCNHs can easily incorporate the gases, drug, metal compounds, solvent, and fullerene etc.6-7, 16, 17, 22, 24 The incorporated materials become stable in the inside space of the SWCNH sheath and can be released again.17 The holes on holey-SWCNHs can be closed again by heat treatment in inert gas.25 The constant-temperature tight-binding molecular dynamics simulation showed that the holes on the sidewalls of the SWCNH sheath were difficult to close by thermal annealing whereas those at the tips were easy to close.25 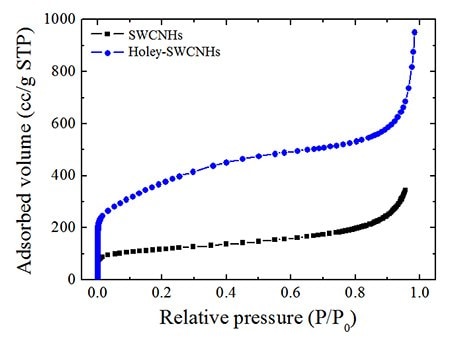 Figure 6.N2 adsorption isotherms of SWCNHs and holey-SWCNHs at 77K.

Since SWCNHs and/or holey-SWCNHs have high specific surface areas, high dispersibility, and high conductivity, they are promising materials for various applications. Some representative applications are as follows.

SWCNHs and/or holey-SWCNHs are novel candidates for gas storage of methane and fluorine6,7 because gas molecules can be stored stably in the cylindrical inside space and interstitial sites. In particular, compressed holey-SWCNHs demonstrated a high storage capacity for methane of 160 cm3/cm3 of nanocarbon at 3.5 MPa and 303 K, exceeding the US Department of Energy target of 150 cm3/cm3 for a practical value expected as storage media.6 The experimental results and grand canonical Monte Carlo simulations show the importance of the adsorption in the interstitial sites for the high total adsorption capacity of holey-SWCNHs.

To energy saving, energy storage technology has attracted much attention in the market.  The capacitor with the holey-SWCNH electrode indicated a large capacity,8-10 which depends strongly on the large specific surface area. The holey-SWCNHs with a specific surface area of 1045 m2/g indicated a specific capacitance of 114 F/g in aqueous electrolyte (H2SO4/H2O).8 A hybrid of holey-SWCNHs and SWCNTs succeeded in preparation of capacitor with large capacity and high power density.9 The SWCNHs and/or holey-SWCNHs can suppress the aggregation of the SWCNTs and undo bundles of SWCNTs.

SWCNHs have been used as the support materials of the catalysts of fuel cells.12-14 The application requires uniform nanoparticles adsorbed on the SWCNH surface. The catalyst sizes, for example, platinum supported on SWCNHs, are controlled to be about 2 nm, which is smaller than that supported on the conventional carbon black.12 This is because there are not only large specific surfaces but also a lot of defective sites and/or interstitial sites between SWCNH sheaths. The current density of the fuel cell using the catalyst-supported SWCNH electrode was larger than that using the catalyst-supported carbon black,12 which demonstrated the suitability of the SWCNHs as electrode material for polymer electrolyte fuel cells.

Holey-SWCNHs are also expected as candidate materials for the photodynamic therapy. The carbonaceous tubules absorb light in the near-infrared region. Therefore, the tubule material can annihilate the tumors by photo hyperthermia (PHT) effect. A double photodynamic therapy (PDT) and PHT cancer phototherapy system using a single laser and zinc phthalocyanine (ZnPc, Prod. No. 341169) and protein bovine serum albumin (BSA)-supported holey-SWCNHs was fabricated.18 In this system, ZnPc was the PDT agent, holey-SWCNH was the PHT agent, and the BSA enhanced biocompatibility. The phototherapy effect was confirmed in vitro and in vivo. When the fabricated samples were injected into tumors and transplanted subcutaneously into mice, the tumors almost disappeared on 670-nm laser irradiation.