Single-walled carbon nanotubes (SWNTs) and multi-walled carbon nanotubes (MWNTs) share some similarities, but also striking differences. SWNTs are an allotrope of sp2 hybridized carbon similar to fullerenes. The structure can be considered as a cylindrical tube comprised of 6-membered carbon rings, as in graphite. Analogously, MWNTs are a series of these tubes in concentric cylinders (Figure 1). MWNTs can be thought of as consisting of a series of single wall tubes nested within one another. There may be as few as 6 or as many as 25 such concentric walls. MWNTs diameters may, therefore, be as great as 30nm as opposed to 0.7 – 2.0 nm for typical SWNTs. Carbon Nanotube’s extraordinary properties enable a wide range of new applications and improvements in the performance of existing ones. This article gives a brief overview of the physico-chemical nature and characterization of MWNTs, with specific emphasis on newly introduced materials that represent the most recent advancement of the technology, and the status of its commercialization. 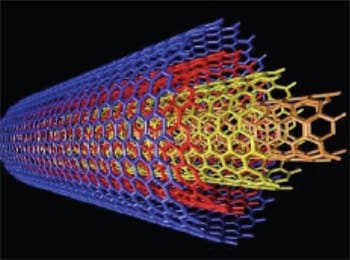 Many of the most extraordinary properties of CNTs reported in the popular and scientific press with respect to mechanical strength, optical behavior, electrical and thermal conductivity, and chemical properties are primarily characteristic of SWNTs. However, due to factors of cost (SWNTs are typically on the order of 100-1000 times more expensive than MWNTs) and certain challenges SWNTs present with respect to dispersion into solutions and polymer compounds, adoption of MWNTs in commercial applications has, to date, outpaced those of SWNTs. MWNTs have remarkable properties in their own right and are being employed in an ever-expanding range of commercial applications. However, due to the wide variability in the number of walls, and some distinct differences in performance which results therefrom, it is difficult to assign specific and meaningful properties to MWNTs that translate directly to performance in the final article. MWNTs are generally employed as additives to polymeric compounds, in ‘buckypaper’[1], in battery electrodes or other composite structures, where the overall performance of that structure is driven by morphological factors as much as the inherent properties of the MWNTs itself. Some property generalizations about MWNTs are provided below.

Electrical: MWNTs are highly conductive when properly integrated into a composite structure. However, it is important to note that only the outer wall conducts – the inner walls do not contribute to conductivity.

Morphology: MWNTs are high aspect ratio materials, with lengths typically ˃100 times diameter, and in some cases much higher. Their application and performance depends not only on aspect ratio, but also on the straightness and the degree of entanglement of the tubes, which in turn is a function of the both the dimensions and degree of defects in the tubes.

Physical: Individual, defect-free MWNTs have very high tensile strength and when incorporated into a composite, such as a thermoplastic or thermoset compounds, can significantly increase its strength2.

Thermal: MWNTs are thermally stable to >600 °C, depending on the level of defects and to some extent on the purity since residual catalyst in the product can also catalyze decomposition.

Chemical: MWNTs are an allotrope of sp2 hybridized carbon similar to fullerenes and graphite and as such are chemically very stable. However, it is possible to functionalize the nanotubes to improve both dispersibility and strength of composites3.

Challenges in Commercialization of MWNTs

The greater complexity and variety of MWNTs creates significant challenges for their utility in commercial products. Specific properties that add to this complexity are described below.

Dispersion: Although generally much easier to disperse into solutions or polymers than SWNTs, dispersion of MWNTs can be challenging, and the quality of the dispersion obtained is a crucial factor in the performance of the final article.

Purity: Many MWNTs processes result in significant residual metallic catalyst which can be detrimental to performance.

Defects: The more layers within MWNTs, the more defects are likely. Inner walls ‘template’ defects to adjacent layers.4 The energy of dispersion processes tends to break the tubes at these defect sites, shortening the CNT. The high aspect ratio of MWNTs contributes much of the value of their use.

The main characterization tools used for MWNTs are observational techniques such as TEM, SEM and AFM which can be used to gather dimensional information such as length, diameter and number of walls. In addition, thermogravimetric analysis (TGA) is used to determine the residual mass, the temperature at the onset of oxidation and the temperature of the maximum rate of oxidation. The maximum oxidation temperature can be affected by many parameters such as tube diameter, the presence of defects and the presence of residual catalyst. At this time it is not possible to separate these various factors and give any definitive meaning to this temperature. However, it represents a very useful manufacturing control parameter. Moreover, the shape of the derivative curve can also give qualitative information regarding the uniformity of the sample with respect to polydispersity of the material. A high, narrow peak is indicative of a narrow distribution of diameters and minimal tube defects. Examples of three materials are shown in Figure 4.

Raman spectroscopy is a less valuable tool for MWNTs than for SWNTs in that there are no RBM transitions in MWNTs. Typically second order transitions at ~ 1350 and 2700 cm-1 are more pronounced than in SWNTs and the G band at ~1590 cm-1 is diminished. In fact for some MWNTs materials the D and G bands are similar in intensity and these spectral differences have been used to estimate the ratio of SWNTs and MWNTs in mixtures5.

There are a wide variety of current and emerging applications for MWNTs. These include:

SWeNT has developed a new category of MWNTs, called specialty multi-walled CNT (SMW), whereby the number of walls is controlled to vary between three to eight walls while maintaining CNT lengths > 3 µm , thus yielding an aspect ratio in the 350 – 550 range. The lower number of walls will result in fewer structural defects, higher purity (> 98% CNTs) and less waste of carbon material, while straighter and longer tubes provide better overall CNT morphology (Figures 2 and 3). 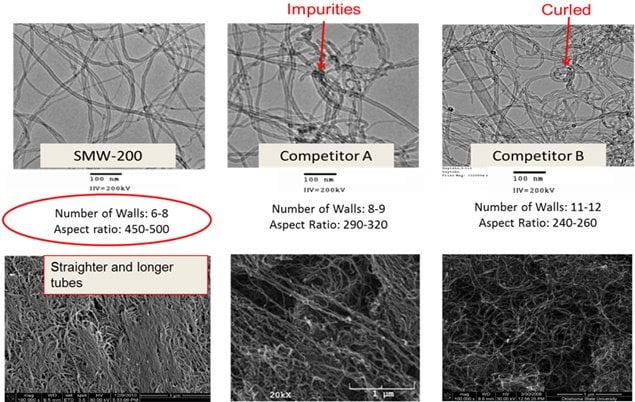 Several points are of importance:

Figure 4 compares TGA test results of SWeNT SMW 200 and the two competitive MWNTs grades. Figure 4 (a) shows the weight loss curves for the 3 materials superimposed. The point at which this line flattens at the right of the graph indicates the residual (non-carbon) material in the tubes. Figures 4 (b), (c) and (d) show the individual curves together with the derivative curve. The temperature at its maximum of the derivative curve is taken as the thermal stability of the material. TGA is also used to estimate the uniformity of the material. Both peak height and width of the derivative of the weight loss curve are measures of the uniformity of the CNT. A high, narrow peak is indicative of a narrow distribution of diameters and minimal tube defects. SWeNT SMW 200 (Aldrich Product No. 773840) exhibit higher purity as shown by its considerably lower % residue. 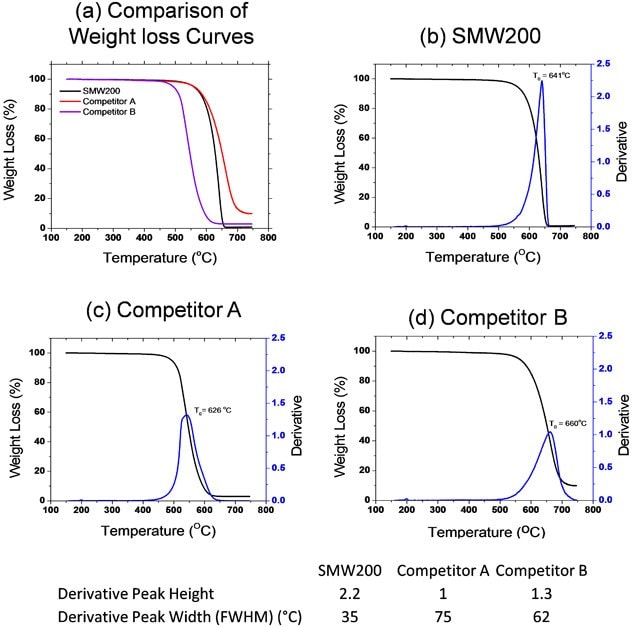 Figure 5 shows a comparison of conductivity data for SWeNT SMW 200 (Aldrich Product No. 773840) versus other commercially available MWNTs materials. Measuring the sheet resistance of CNT buckypapers (a thin solid film created by filtration of 0.15 g of CNT/m2) shows that as expected a SWNT material (in this case SWeNT SG76, Aldrich Product No. 704121) has the lowest resistivity value. But significantly, the SMW 200 purified material is more than twice as conductive when compared to the best MWNT material investigated (Competitor A). 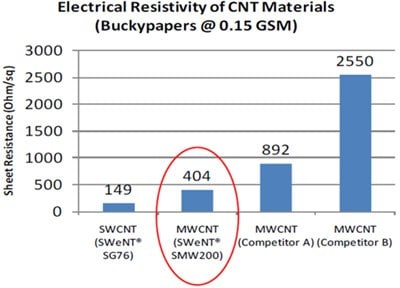 Figure 6 compares sheet resistance buckypaper data for different products as a function of the CNT aspect ratio (L/D), as determined by AFM and TEM analysis. It is clearly observed the trend of lower sheet resistance with higher aspect ratios, with SWeNT SMW 200 (Aldrich Product No. 773840) having the best conductivity properties. In addition to the CNT aspect ratio, we have also observed that the morphology of the tubes is another key factor that strongly influences the conductivity of the tubes. A lower number of defects in the tubes results in higher electrical conductivity capacity. 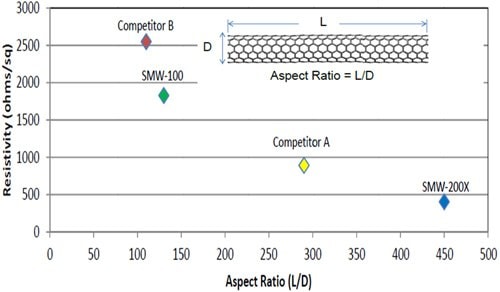 Figure 6. Sheet resistance of buckypapers as a function of the CNT aspect ratio.

MWNTs have been adopted in a significant number of applications, but advancements in their properties have been required to fully exploit their potential. Improved MWNTs have been recently developed which are serving to greatly expand the market reach of this unique category of advanced materials.