SWCNTs, discovered by Sumio Ijima in 19931, have unique electrical, thermal and mechanical properties with high specific surface area and aspect ratio. They can be both metallic and semiconducting depending on their chirality. These characteristics make SWCNTs applicable in a wide range of fields, such as microelectronics, energy, multifunctional materials, and structural materials.

Various methods have been used in the synthesis of SWCNTs including Laser Ablation, Carbon Arc and CVD processes utilizing a gaseous catalyst (HiPCo process) and a supported catalyst (CoMoCAT process).

In 2004, Dr. Kenji Hata’s team at the National Institute of Advanced Industrial Science and Technology (AIST) discovered a revolutionary method of SWCNT synthesis, which was named as the “Super Growth Method” (SG Method).2 The SG Method has improved catalyst activation which is enabled by adding a minute amount of water into the CVD feedstock gas, resulting in higher efficiency and productivity than other methods due to its large-scale synthetic process (Figure 1). In the large-scale synthetic process, a variety of metal substrates were examined and it was found that a general-purpose metal substrate of iron-chrome-nickel alloy can be used instead of silicon wafer.4 After studying various coating compositions and coating processes, a catalytic layer was also made on the metal substrate by a coating process enabling the successful synthesis of SGCNTs.

Figure 1.The Large-scale Synthetic Process of the Super Growth Method

Single-walled carbon nanotubes synthesized by the Super-Growth Method (SGCNTs) have the characteristics of greater length, higher purity and larger surface area (Figure 2), leading to high electrical and thermal conductivity, and mechanical properties that are required for high performance composite materials.

SGCNTs hold the promise of delivering exceptional mechanical properties and multi-functional characteristics. To employ carbon nanotubes as effective reinforcement in nanocomposites, proper dispersion and appropriate interfacial adhesion between the CNTs and matrix have to be guaranteed.

The binding energy of CNTs and energy density delivered from the dispersion process are crucial for CNT dispersion as it translates as the delivery of mechanical energy into the solution in order to disentangle CNT aggregates. In general, mechanical shear-mixing through stirring or extrusion can be performed either in a low viscosity solvent with or without dissolved polymers, or highly viscous polymer melts. The shear stress imparted by the mixing machines is below 20 kPa. According to Huang and Terentjv6, the binding energy (van der Waals force) of MWCNTs is ca. 16kPa, which is the shear stress that the CNTs become dispersible by the mixing machines. On the other hand, the binding energy of SWCNTs is ca. 100 MPa as reported by Huang and Terentjv. Thus, it would be impossible to disperse SWCNTs by the mixing machines. Consequently ultra-sonication or high pressure jet-mill with cavitation effect would be appropriate for SWCNTs.

Just as SWCNTs, SGCNTs also need cavitation force by ultra-sonication or high pressure jet-mill to disperse in water and organic solvents. In the case of polymer composites, it is necessary for the better performance of SGCNTs to disperse them well in the polymer matrix with little damage to the SGCNTs. In that sense, the “solution mixing method” is preferred for SGCNTs. The “solution mixing method” is the technology to disperse CNTs into a polymer solution with solvent using dispersing equipment, and then recover a composite from the solution. It has advantages such that it can infiltrate organic solvents into bundles of SGCNTs and disentangle them by cavitation force above 100MPa by a high pressure jet mill7 like a Nanomizer as depicted in Figure 3. Figure 4 shows difference in electrical conductivity for CNT composites prepared using different dispersion methods.

Figure 3.Schematic of dispersing methods of carbon nanotubes in rubbers 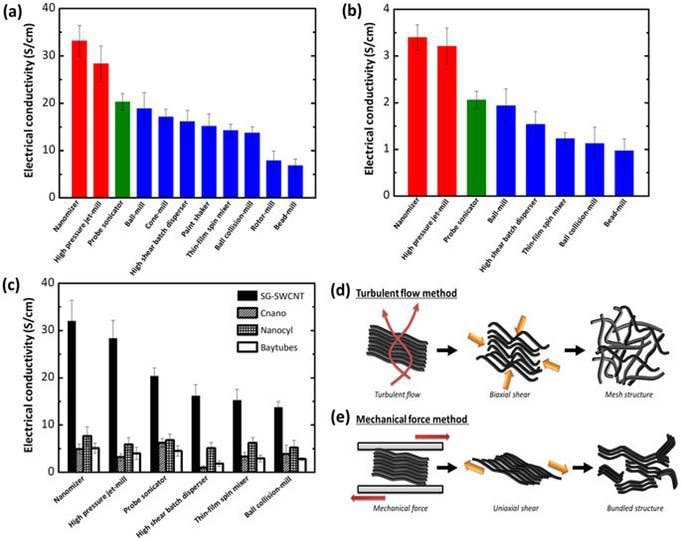 A composite of SGCNT with fluoro-rubber has superior electrical conductivity of about 100 S/cm by optimization of formulation (SGCNT content of 15.8 wt%).8 Ata et al. developed excellent mechanically durable rubber10 with a high electrical conductivity and electrically conductive resin11 by adding a small amount of SGCNT. In the former case, they tangled bundles maintaining the length of SGCNTs and dispersed the raveled arboreal network of SGCNTs into matrix rubber (fluoro-rubber). In the latter case, they controlled the dispersion state and distribution state of SGCNTs; i.e., they made different phases with SGCNTs and without SGCNTs. As a result, this electrically conductive resin with 0.01 wt% of SGCNT showed a volume conductivity of 10-3 S/cm.

These rubber composites of SGCNTs with fluoro-rubber were molded by compression, and the products had a surface profile with micron accuracy.12 Furthermore, they also succeeded in developing an excellent weather-resistant rubber composite by controlling the sophisticated SGCNT arboreal network.13 This composite with SGCNTs and fluoro-rubber showed a significant improvement in its weather-resistant characteristics including heat resistance, hydrothermal resistance, acid and alkali resistance in comparison with the normal fluoro-rubber. This composite has great potential for applications such as sealing the ring of oil-drilling platforms, and high temperature seal for chemical plants. A new thermal pad (thermal interface material: TIM) that demonstrates high thermal conductivity relative to its thickness was developed using a method for manufacturing a material featuring both superior flexibility and high thermal conductivity relative to its thickness, based on a ternary compound of SGCNT, graphite and fluoro-rubber. This sheet is very soft, and displays superior heat resistance to existing thermal grease (Figure 6). This TIM is expected to be a new thermal management material.16 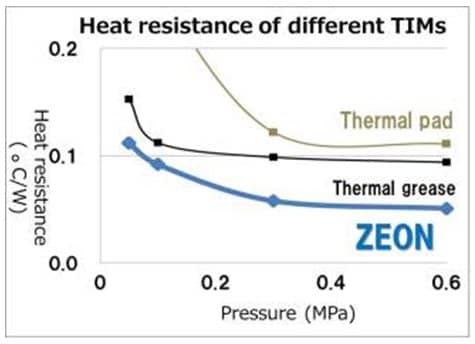 Research on metal composites with SGCNTs has greatly advanced and some metal composites with excellent properties have been proposed. Chandramouli et al. have succeeded in the development of composites of copper with SGCNTs by plating technology of copper on SGCNT sheets.17 This composite has the same electrical conductivity as copper, but is lighter in weight and exhibits a lower increase of electrical resistance with temperature elevation in comparison with copper.

The composites of SGCNTs with aluminum have also been developed. One of the composites showed 850 W/mK of thermal conductivity, which is 4 times higher than that of aluminum.9 This composite also has characteristics such as light weight and excellent processability and may be used as heat dissipation material in power semiconductor devices.