Generic screening to provide fast solutions for chiral method development, whether needed for routine analytical use, trace analysis, LC/MS or preparative LC, has become increasingly important. In this article, simple screening tools are used with chiral stationary phases based on macrocyclic glycopeptides to generate robust methods for a broad range of applications.

A change in discovery strategy in the pharmaceutical industry has resulted in the earlier investigation of the generally different biological activities for the enantiomers chiral drug molecules. The number of chiral molecules coming through the discovery process has increased enormously over the past few years; they have also become more and more diverse so the approach to chiral method development has needed to incorporate just those chiral stationary phases (CSPs) that offer the broadest possible range of applications for fast and efficient screening.

Over the past 25 years or more, several hundred CSPs have been developed, with around 110 commercially available. By bonding or coating a chiral selector – either a small chiral molecule or a larger polymer such as a protein - onto silica, different interaction strengths for the two enantiomers can be induced. The cellulosic and amylosic phases were some of the earliest and broadest ranging CSPs to be developed and are based on natural chiral polymers, coated (or bonded, as in 2 phases) onto silica; one of Advanced Separation Technologies’ (Astec, now part of Sigma-Aldrich/Supelco) new products, the PCAP ™ column also utilises polymer technology to provide chiral selectivity in a number of mobile phase types.

In the mid-90’s, a new CSP range based on the chemical bonding of macrocyclic glycopeptides was developed by Astec [1] and since they have extremely broad applicability for different compound classes, including polar ones, the pharma industry has widely accepted them into their chiral method development schemes. Applications cover a wide range from aliphatic to aromatic molecules, small heterocycles to large fused ring aromatics, acids, neutrals and bases, plus amino acids and peptides.

CHIROBIOTIC columns are produced by covalently bonding a highly selective glycopeptide to high purity silica in several positions, so that the columns are extremely robust and can be used over a wide flow rate range and varied mobile phase conditions. There are four CSPs in the series, based on vancomycin, teicoplanin, teicoplanin aglycone and ristocetin. There are no restrictions in solvent choice (even chlorinated solvents can be used), although some will give a higher chance of chiral selectivity – the only restriction is in reversed phase when a pH range of around 3 – 7 is applicable (slightly different for each CSP).

For chiral screening, it is essential that a number of mobile phase possibilities are available, both to provide a variety of enantioselective interactions between solute and CSP and to cover a range of sample solubilities. The strength and availability of these enantioselective mechanisms will vary according to the mobile phase – π-π interactions, for instance, are only strong in normal phase solvents, while ionic interactions are only possible in reversed phase or in polar (methanol-based) mobile phase types. An effective screening system will include all of these.

CHIROBIOTIC CSPs are used routinely in four distinct mobile phase types – polar ionic mode, polar organic mode, reversed phase and normal phase. The polar ionic mode (‘PIM’) is unique to the CHIROBIOTIC phases for ionisable molecules. It uses methanol with small amounts of acid and base added to it, or methanol with a small amount (typically 0.1g per 100mL MeOH) of a solid volatile ammonium salt directly added to the MeOH (this can be acetate, trifl uoroacetate or formate).Figure 1 gives a typical example in this mode, popular for its speed and enhanced MS detection. The polar organic mode is another non-aqueous mobile phase system that uses single or combinations of solvents and is effective on these CSPs for neutral molecules. Reversed phase is very similar to non-chiral type RP applications, where increasing the water content increases retention (except for some amino acid applications, when it is the reverse). It is also ideal for LC/MS methods. Finally, normal phase, representing about 15% of all separations, uses typical hexane or heptane-alcohol mixtures and has provided some unique separations. The CHIROBIOTIC Handbook [2] provides examples of applications in all mobile phase types.

By going from one mobile phase type to another - on the same column - the separation mechanism changes, giving you another opportunity for separation; there are no memory effects from the previous mobile phase that can affect results. Our methods development laboratory has over the years developed and refi ned the screening composition for each mobile phase type, so these are available to you to determine very quickly whether a given column type and mobile phase type are going to give you the desired selectivity. There are then simple optimization techniques for developing the method the way that you need it (for example, for MS detection, biocatalysis, dissolution analysis or preparative applications).

The aim of this screening system is that it gives a rapid positive or negative answer; if a single, symmetrical peak is seen within the run time – provided the retention time is above 10 minutes – then this column or this mobile phase does not have the correct selectivity. If the retention time is below 10 minutes, it is important to rerun, diluting the mobile phase a little; the method can always be speeded up later as part of the optimization process. If there is peak splitting or even a slight shoulder, then you can progress to the optimization steps. For the complete screen, you proceed through the four screening mobile phases for each column to determine the best selectivity. Remember, there are no memory effects with the CHIROBIOTIC range, so each column can be used for each mobile phase type in sequence. 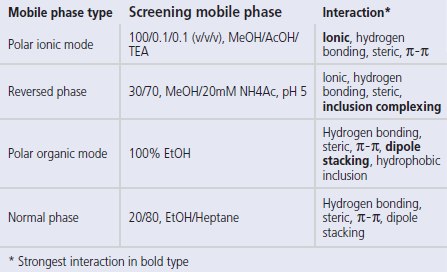 There are simple optimization protocols available for these columns. The polar ionic mode is especially easy to manipulate, using acid/base or volatile salt concentration changes to increase selectivity and/or change retention. Normal phase and the polar organic mode use a standard selection of modifier choices – different alcohols, for instance – to optimize the method; the retention is simply controlled by the polarity of the solvent. Reversed phase uses the same variables as in most RP methods – buffer type and concentration, organic solvent choice – to provide the best separation (Figure 2). In addition, temperature can be used; lower than ambient temperatures have always been used in chiral LC to significantly increase selectivity, but for CHIROBIOTIC CSPs, higher temperatures are also often used to increase peak effi ciency, reduce retention times or reverse elution order [3]. These columns can be used up to 50 oC without any loss in performance. 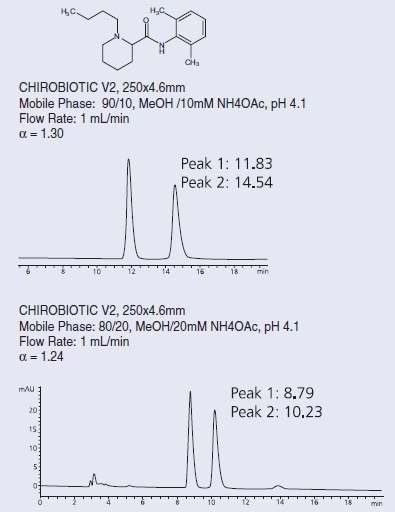