The dispersibility and bundle defoliation of single-walled carbon nanotubes (SWCNTs) (724777, 773735, and 775533, for example), which can be applied to materials produced by the CoMoCAT® process, have been extensively investigated by SouthWest NanoTechnologies (SWeNT®) and at the University of Oklahoma.1 The procedure employed to disperse SWCNTs has a significant impact on the final suspension characteristics, including solution concentration, stability, and the fraction of individual nanotubes. Even though it is possible to obtain a stable dispersion of bundles where the majority of bundles are not exfoliated, the specific aim is to create dispersions of exfoliated tubes. A number of technical approaches, including covalent and non-covalent stabilization of SWCNTs, can be adopted to prepare a stable and homogeneous dispersion of SWCNTs. The non-covalent approach has been of particular interest since the surface structure and properties of the nanotubes remain intact when this methodology is used.

In a typical dispersion procedure, a surfactant is adsorbed on the SWCNT surface and the solution is sonicated, leading to the debundling or exfoliation of the carbon nanotubes. Since an individual nanotube covered by surfactant molecules has a density similar to water, centrifugation at 20,000–170,000 x g is needed to separate carbonaceous impurities and large SWCNT bundles from isolated SWCNTs. Smaller bundles may be separated with an optional second sonication step, which can further increase the fraction of individual tubes in the suspension (see Figure 1). 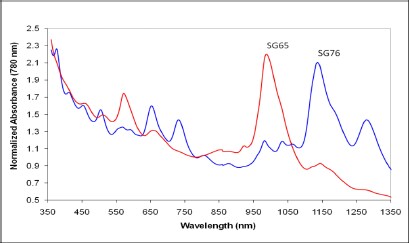