Over the last several years, Knochel and coworkers have reported reagents for selective metalation, deprotonation, and nucleophilic additions. These reagents have transformed the field, allowing for unprecedented selective conversions to reactive intermediates within a molecule which contains sensitive functionalities under mild reactions.

While halogen-metal exchange reactions are among the most common methods for preparing organometallic reagents, the limitations when utilizing Li-halogen exchange reactions include the compatibility with other functionalities in the molecule and the requirement for low temperatures. On the other hand, Mg-halogen exchange requires higher temperatures, which also inhibits utility due to compatibility with functionalities in the molecule. Additionally, because of the lower reactivity of the organomagnesium reagents, competing reactions can occur, such as elimination of HX in the alkyl halide to yield the olefin. Knochel and coworkers discovered that the use of salt additives increased both the rate and the efficiency of the reaction. After some optimizing, it was found the most effective reagent was generated with R-MgCl (R = i-Pr (656984), s-Butyl (703486)) and 1.0 equiv of LiCl.1 Using these reagents, it is possible to convert a variety of functionalized and highly sensitive substrates to their corresponding functionalized organometallic reagents, including both aryl- and heteroarylmagnesium derivatives. The increased reactivity may be due to the breakup of polymeric aggregates known to exist in typical Grignard reagents as well as an increase in reactivity due to a negative charge on magnesium in the formed species i-PrMgCl2-LiCl+ (nucleophilic properties of the i-pr group are augmented). The rate enhancement and promoter effects of the salt has led to these efficient reagents to be termed TurboGrignards. Some of the advantages of this technology are the following:

Knochel and coworkers examined a variety of aryl substrates (Table 1), including those containing sensitive functionalities, including CO2R, CN, OMe, and halogens. In all cases, the substrates were tolerant of the TurboGrignard reagent, readily forming the organometallic, and effectively reacting with a plethora of electrophiles. While rate enhancements are observed with the TurboGrignards, this increased reactivity does not have a negative impact on the overall scope of the reaction, permitting transformations to occur in the presence of a variety of functional groups. Even heteroaryl halides are converted to their corresponding organometallics in the presence of i-PrMgCl•LiCl in excellent yields (Table 2). 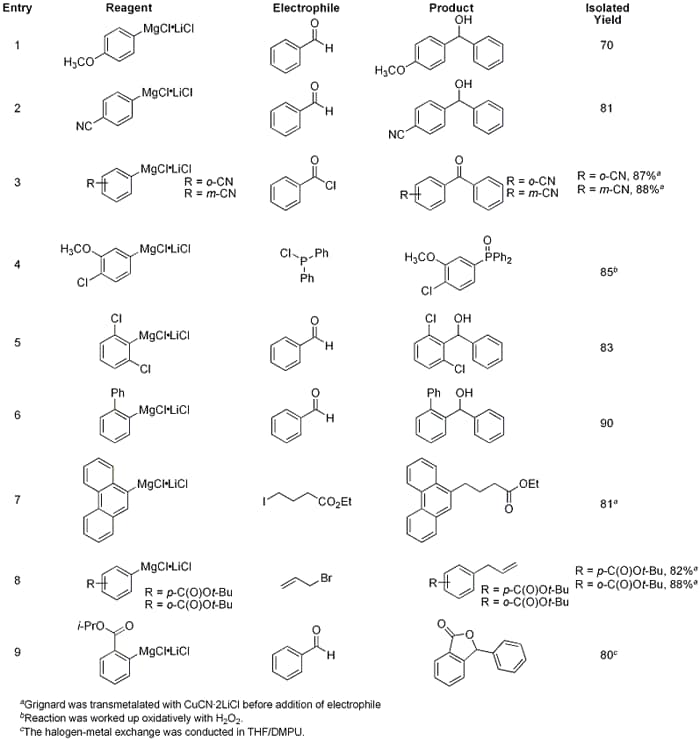 Over the last several years, Knochel and coworkers have demonstrated the utility of the TurboGrignards. Below is a summary of a few key transformations utilizing the Grignard prepared via the TurboGrignard, i-PrMgCl•LiCl.2

Deprotonation and functionalization of aromatics is a key synthetic transformation. However, common strong organic bases such as alkyllithiums or lithium amides cause competing addition reactions (Chichibabin reactions). Additionally, many amides must be generated in situ due to their low stability in solution. Finally, the low temperatures required when using these bases makes their use somewhat inconvenient. Knochel and coworkers have reported the use of TMPMgCl•LiCl for regioselective deprotonation of arenes and heteroarenes.3 After further elaboration via addition of an electrophile, regioselective access to functionalized arenes and heteroarenes in excellent yields is possible. This base has been termed Knochel-Hauser-Base and some benefits of this technology are the following:

The Hauser base, TMPMgCl•LiCl, was found to be effective in a plethora of circumstances, broadening both reaction scope and tolerance to a variety of functional groups. The regioselective metalation of arenes and heteroarenes was not only effective but occurred preferentially over undesired side reactions, in the presence of sensitive functionalities, and with increased solubility. The authors believe that oligomeric aggregates are broken up in the presence of TMPMgCl•LiCl. The table below contains many substrates that were examined and found amenable to functionalization using TMPMgCl•LiCl (703540) (Table 4). 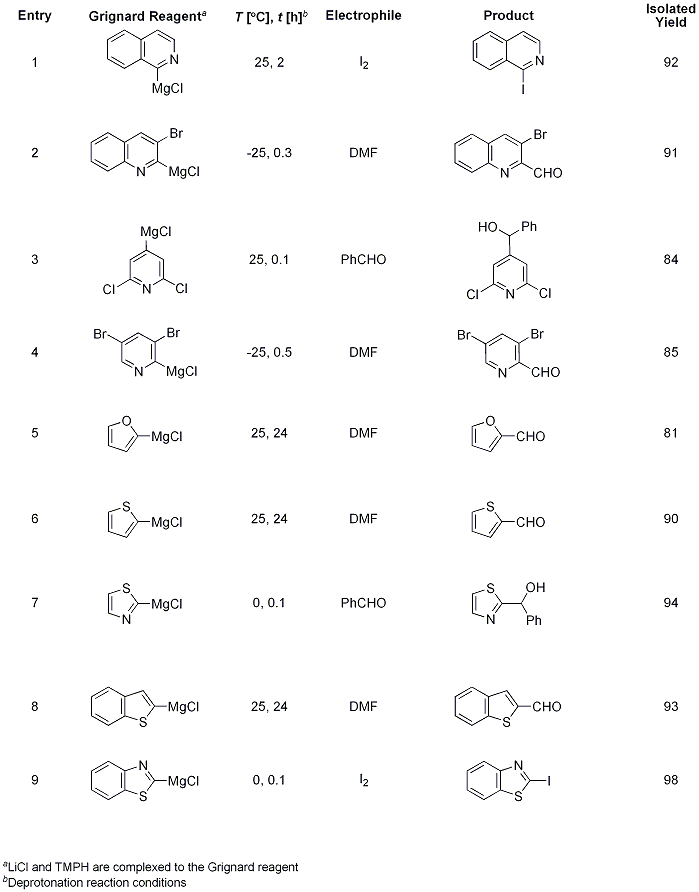 Other regioselective metalations were also demonstrated. The mixed Mg/Li amide successfully metalated the phenyl ring in 2-phenylpyridine, rather than the typically preferred 2-pyridyl position (Scheme 3). Even the historically challenging pyrimidine metalation proved successful, providing the metalated intermediate Grignard, which was iodinated with I2 (Scheme 4). The regioselective metalation of pyrimidines was best conducted under inverse addition conditions, where the pyrimidine is added to a solution of the TMPMgCl•LiCl. The Knochel-Hauser-Base TMPMgCl•LiCl was also effective in the deprotonation of both aryl and heteroaryl compounds containing base-sensitive functionalities (Scheme 5).

Scheme 3.Metalation of 2-Phenyl Pyridine with TMPMgCl•LiCl and Subsequent Functionalization

The scope for the metalation of arene derivatives with TMPMgCl•LiCl was also examined and found to be broad. As shown below, a variety of functionalized aryl Grignards were prepared using TMPMgCl•LiCl, followed by subsequent trapping with various electrophiles.4 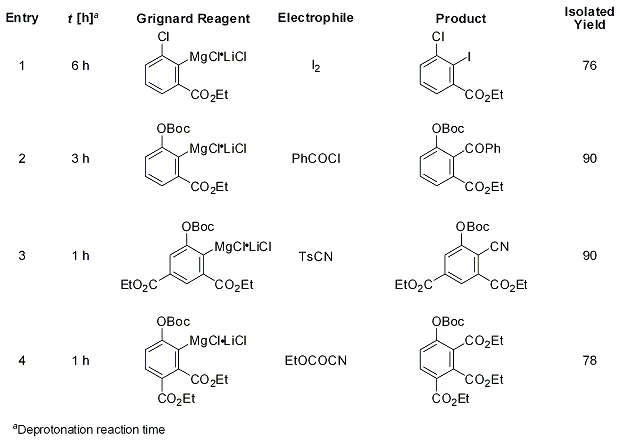 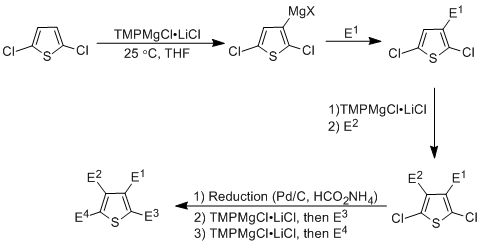 Lanthanide salts have been shown to prevent competing reduction and enolization side reactions in the nucleophilic addition to ketones. However, both the solubility of lanthanide complexes as well as the nature of the drying method have historically limited the scope of their use. The addition of LiCl has resulted in enhanced reactivity of several organometallic reagents; thus, Knochel and coworkers prepared LaCl3•2LiCl and found it to be soluble in THF. Therefore, in the presence of LaCl3•2LiCl, even sterically hindered and or enolizable ketones and Michael acceptors as well as unactivated imines can undergo 1,2-additions cleanly to provide the desired product resulting in a much improved reaction scope. In addition, other benefits for the catalyst include6:

As shown below, the addition of a Grignard reagent to a ketone in the presence of the oxophilic LaCl3•2LiCl promotes selective 1,2-addition (Scheme 8). 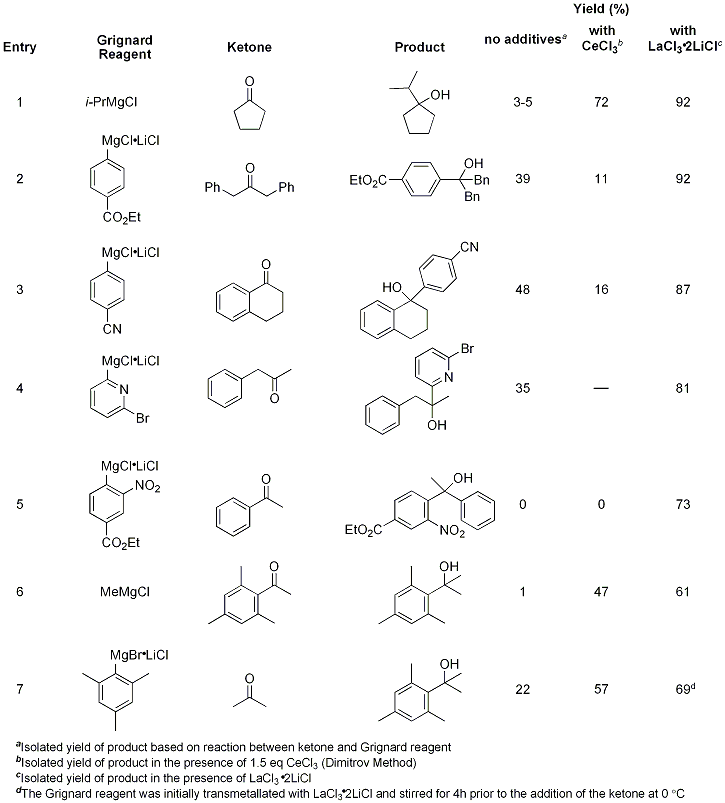 Subsequent to the initial publication using the soluble and efficient lanthanide salt-LiCl complexes, Knochel and coworkers reported that sub-stoichiometric quantities of the lanthanide salt were sufficient to promote the desired 1,2-addition. This protocol was amenable to use of alkyl, aryl, and heteroaryl Grignard reagents.7

The addition of n-BuLi to cyclopentanone in the presence of LaCl3•2LiCl was also carried out and provided solely the 1,2-addition product (98%). Additionally, catalytic quantities of LaCl3•2LiCl allowed for addition of Grignard reagents to unactivated imines, providing the amine products in excellent yield. The analogous reaction performed without the lanthanide salt provides the amine product in low yield. 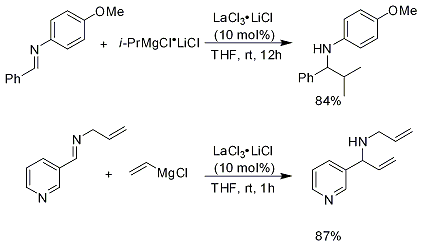 Scheme 10.Nucleophilic Addition of Organomagnesium Reagents to Non-Activated Imines in the Presence of LaCl3•2LiCl