Researchers have explored many processes where solar irradiation can be used to create an ecologically healthy environment. Examples range from energy storage to degradation of atomic waste, which is an attractive direct route for solar energy conversion and storage, with a high potential impact is the production of electricity. Advances in the synthesis of materials and experimental tools that permit manipulation or engineering at the molecular level have given impetus to the design of photonic and optoelectronic devices from a bottom-up type approach. One such device that our laboratory has been developing and optimizing for many years is a thin film solar cell that is based on dye-sensitization of wide bandgap semiconductors, in the form of nanocrystalline films. The design of the dye-sensitized solar cell (DSC) is detailed in Figure 1. 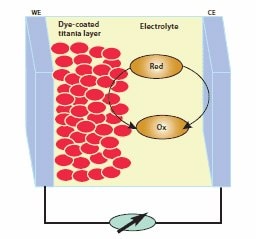 A dye-sensitized solar cell (DSC) is a sandwiched structure made of two conducting oxide electrodes with an organic redox electrolyte filling the interlayer separation (Figure 2). The heart of the solar cell is the mesoporous wide bangap oxide layer deposited onto a conducting oxide substrate. This oxide layer is composed of nano-sized particles that have been sintered together to enable electronic conduction. It has a spongy-like structure that upon immersion in a dye solution picks up the dye molecules giving an intense coloration. Exposure of the solar cell to visible light leads to electronic excitation of the dye, D, to an excited state form (D*) that can inject electrons to the conduction band of the oxide semiconductor. The original state of the dye D (D+) is subsequently restored by the reduction of the oxidized form of the dye by the redox electrolyte. In the most extensively studied version of DSC, the electrolyte is an iodide/triiodide mixture dissolved in an organic medium. 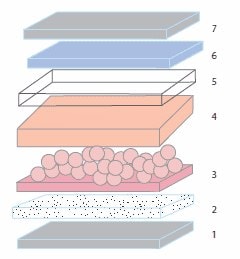 Electrons injected in the oxide layer hop through the network of the nano-sized particles to reach the back collector electrode. Under closed circuit conditions, the electrons flow over the external circuit to arrive at the counter electrode and reduce the oxidized form of the redox mediator. This sequence of reactions constitute a light-induced oxidation-reduction cycle or photosensitization of the semiconductor electrode. In the most extensively studied version, a polypyridine complex of Ru such as {Ru(4,4'-(COOH)2bpy)2(SCN)2} (N3, Prod. No. 703206) is used as the dye, together with an iodide/triiodide redox couple in methoxypropionitrile (Prod. No. 65290) solvent, which is used as the redox electrolyte. A variant of this system uses a hole transport material, a triarylamine deriviate, 2,2',7,7'-tetrakis-(N,N-dip- methoxyphenylamine)-9,9'-spirobithuorene, (spiro-OMeTAD), as an electron mediator instead of the (iodide-triiodide) mixture. The advantage of the spiro-OMeTAD based DSC version is that it is a solvent-free, quasi-solid state system that can be packaged for portable electronics.

Advantages of the Mesoporous Oxide Layers

Photosensitzation of semiconductors had been examined earlier1-8 with single crystal electrodes and the process was found to be relatively inefficient. Observed photocurrents were very low (few μA/cm2), leading to an overall light conversion efficiency of <<1%. Several unique features of the DSC allow pronounced enhancement of the light energy efficiency. Using mesoporous structures, it is possible to control the dye distribution on the surface to achieve locally high concentrations without any side effects. The available surface area for dye distribution is considerably high in a mesoporous structure (surface roughness factor >1,000) and as such it is possible to achieve monolayer coverage without concentration quenching as observed on flat surfaces.1-8 It is also possible to have absorbance of >3 permitting near total absorption of visible light. However, increasing the surface area can lead to lower efficiencies due to the promotion of charge recombination before charges arrive at the collector electrode. Excited state charge injection of an anchored dye to the conduction band of the oxide semiconductor permits a design where the forward electron transfer can occur much faster compared to the backward electron movement, i.e., relaxation of the dye to its ground state. A five to six orders of magnitude difference is feasible permitting near quantitative scavenging of all injected electrons. In homogeneous solvents, back electron transfer tends to occur very rapidly, often within the primary cage itself. In addition to the above differences due to the morphology of the dye-coated oxide substrate, there are other important effects that are responsible for the high overall efficiency of this type of solar cell. In contrast to the flat surfaces of macro-electrodes, a high concentration (typically 0.5 M) of iodide ions in the electrolyte effectively screens out any macroscopic electric fields. Charge separation is primarily driven by the inherent energetics (redox potentials) of the different species at the TiO2/dye/electrolyte interface rather than by the presence of macroscopic, electrostatic, potential energy gradients.

The DSC research field can be an exciting playground for synthetic and materials scientists. Unlike single material-based crystalline semiconductor solar cells, DSCs have several key components which allow numerous innovative approaches. DSCs are being developed in many different textures and compositions, and display a variety of properties. In the following sections, we highlight some of the novel advancements being tested with a wide variety of chemical components. It has been possible to design DSC panels where the oxide layer is optically translucent to opaque; flexible, lightweight versions based on polymer supports in lieu of glass substrates (ideal for portable electronics) and also versions created in a variety of colors. Examination of numerous dyes of different chemical structure and functional groups has permitted identification of the key requirements for efficient sensitization:

Many different dyes with a variety of chromophoric ligands have been synthesized and studied in DSCs: polypyridine complexes of transition metals, metalloporphyrins, and metallo-phathalocyanines as well as different metal-free, donor-acceptor type dyes. Figure 3 illustrates the tunability of colors in the design of DSCs. 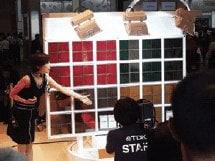 Polypyridine complexes of Ru have been the first choice of dyes in most of the studies due to the vast knowledge accumulated over the years in regards to their photophysics and photoredox chemistry. Synthetically, it is easy to vary the level of conjugation of the polypyridine ligand systems and introduce suitable groups in the periphery of the ligands to induce and tune both spectral and redox properties. Coordination compounds of the general structure ML2X2, where L stands for 2, 2'-dicarboxybipyridine (dcbpy), M= Ru(II) or Os(II) and X represents a halide, cyanide, thiocyanate, acetyl acetonate, or thiocarbamate, and have been found to be efficient sensitizers. Ru-complexes based on carboxy bpy or carboxy terpy such as N3 (Prod. No. 703206), N719 (Prod. No. 703214), Z907 (Prod. No. 703168) and “black dye” (tris(cyanato)-2,2',2”-terpyridyl-4,4',4”-tricarboxylate)Ru(II) are used worldwide as benchmark reference dyes. Figure 4 shows the structures of some of these high performance dyes: 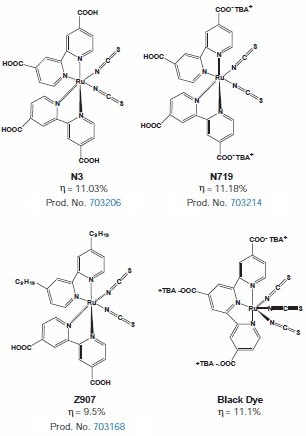 For coumarin or polyene-type organic dyes, strikingly high solar conversion efficiency reaching up to 9.2% has been reported by Arakawa, Uchida and coworkers.1-3 Molecular engineering of the interface is important to obtain high efficiencies. Additives that promote desegregation of the dye molecules and alkylamine donors help control the surface properties of the oxide. In addition to reducing the dark currents, they allow a higher fill factor.

State of the Art Performance

Solar cell research and development takes place at three levels. Primary optimization studies are done usually in small (<1 cm2 area) cells. Modules are the second phase of solar cell development and are larger in size (typically 25-100 cm2). The third stage involves large area terrestrial units for solar power generation which are much larger and composed of many modules connected in series or parallel. Typical panel sizes are 0.5 to 2 m2. Extensive research in many laboratories across the globe has led to significant progress in obtaining increasingly higher solar light conversion efficiencies, both at the lab cell levels and also in larger modules.

Tables 1 and 2 provide a summary of the best performance data obtained (state of the art) to date in solar light conversion, as well as open circuit voltages (VOC) at various fill factors (FF) using various dyes for a number of surface areas.

N-719, N-749, and N-3 are codes for molecular structures as seen in Figure 4. All systems employ a liquid electrolyte mixture of (iodide/triiodide) in a low-viscosity solvent. Previously unpublished data.

Improvement in the light absorption properties of the dyes particularly in the near-IR region (700-900 nm) will lead to higher photocurrents and light conversion efficiency.

For practical applications, dye solar cells have to meet stringent stability requirements. For a lifespan of >10 years, the dyes have to be stable to reversibly undergo millions of oxidation and reduction cycles. In tropical countries, surface panel temperatures can easily exceed 60 °C. Hence, solar cell modules should be tested for stability at elevated temperatures up to 80 °C under high humidity conditions. With low boiling solvents, corrosion of the seal can also create stability problems. For this reason, current efforts are directed towards using low-temperature molten salts (ionic liquids) such as alkylimiadazolium halides. Using long-chain alkyl substituents on the bpy ligand as in the dye Z907 and ionic liquid based electrolytes, it is possible to maintain redox stability for over 1,000 hours of continuous illumination. Outdoor studies of modules have demonstrated several unique features of DSCs, such as higher solar energy conversion under diffuse light conditions and positive temperature coefficients. References listed below provide more detailed information about recent advances in the field of dye-sensitized solar cells.